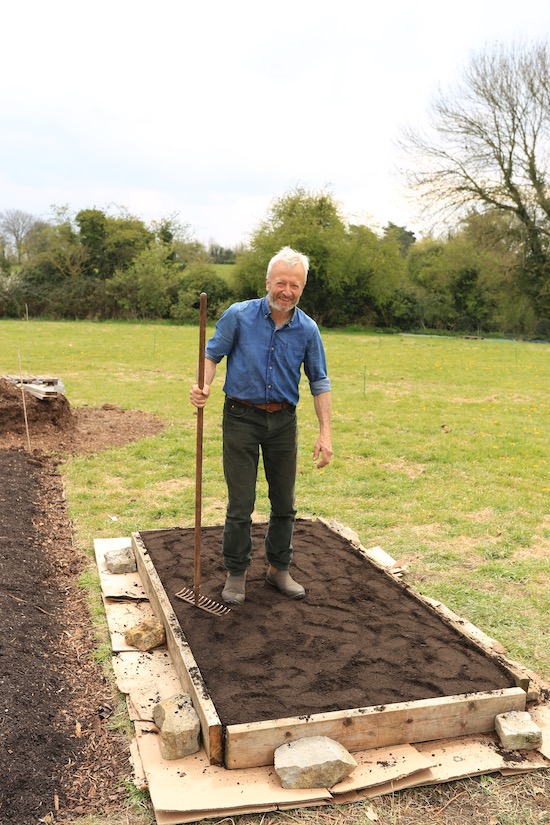 A difficult spring so far, with a lack of warmth and frosts down to -4.5 C here, nine frosts in the last 12 nights. However it has been dry! And although that means watering new transplants, it also means that growth stays healthy. All my carrots have come up, with no slug damage. That is a little unusual.

On 16th April at 18.00 GMT you can see my new video about growing carrots. And see live weather at Homeacres, anytime.

Looking ahead, things are warming up and exciting times are in front of us. There is still however no rush to sow courgettes and squash (say 20th-25th in view of the cold), nor climbing beans (10th May here). I do plan to sow cucumbers very soon, but on heat for sure.

Considering the weather, I am so impressed with how these plants to keep on giving. We have picked them every week for the last six weeks and before that it was about every second week since late November. They are like old friends. I lost some lettuce and we are pulling some lovely radish now, sown February and transplanted 2nd March, multisown.

Sadly within three weeks or so most of them will be rising to flower and we twist them out, then spread compost and soon after that transplant summer vegetables. By that time, the outdoor plantings will be cropping, mostly lettuce.

After all these years – I made a chronic mistake. I was worried about frost being hard enough, even in the greenhouse on the hotbed, so although I knew it was risky I put a fleece on my tomato seedlings for just the coldest night. This was just after I had topped up the hotbed with two barrowloads of fresh horse manure. Overnight the ammonia gases singed many leaves and you can see the results. My harvest of early tomatoes is quite compromised and I have sown again. Fortunately a few plants were not covered!

My pain is mitigated by the growing success of the new module trays, CD 60s. Plant roots like them and they are extremely easy to manage. Although of small size, I grew nice transplants of peas for shoots, two seeds per cell.

For a pyralid test (see video), I had not before used seed of field beans. They are more sensitive to this weedkiller then broad beans and the ones I sowed a month ago in mushroom compost and green waste compost are not looking too brilliant at the tips.

Even worse are seeds I sowed into some digestate which I was given. It behaves like no other compost I have ever used, and in fact I would not call it compost because of how it is created. Last year we found that plants struggled wherever we used it as a mulch.

For sure this digestate is fresh, it was warm about 40 C in the sack, so that is part of the reason why the seeds are not appearing. But I have sown seeds into fresh, warm green waste compost and they all grew. I still do not really understand this product. There is no advice that one should not use it as a mulch so if one does that and then transplants or sows, I can’t see plants growing well at first.

Brassica transplants in particular are damaged where touching fleece and when frosts are below about -4 C. As we have seen this year! A reader in Paris lost all brassica plants to weather. of -5C by night and 25C by day. Also she was transplanting into a new bed of compost over cardboard. I don’t know how much she watered the transplants.

Some of my transplants under fleece are looking poor at the moment, with crisp yellow damage to leaves where they were touching the fleece. However there is still healthy green leaf at the main growing point. Onions look ok and so do most leaves where the fleece was held above them.

Normally I do not use hoops or supports for fleece, because it then blows away in wind. As it happens, we have had a little wind this year! More details in this video.

Photos below are all from sowings mid February, except for the carrots sown direct late March. The battens have helped.

I gave this advice to a follower who missed the sowing dates!

PEAS FOR SHOOTS, go for it

It’s a cold, late spring so you have actually lost less time than normal.

Adam did a great job of knocking off the bottoms of each pallet, which makes them easier to handle and avoids the waste of space around the edges. Meanwhile I used my sharp, copper spade to remove the top or surface roots of ivy, some nettles and a few woody roots of bramble and blackthorn. I want the edge area clear of those weeds.

Then it’s simply a question of using wire to hold the corners together. There are no posts and the photos show how I used cardboard. Later we shall make more heaps alongside. More advice here on this site.

I made this yesterday for a photo shoot, and once materials are assembled, it’s 3 to 4 hours work for the whole process, including the planting. Details in my Course book & Calendar. Compost here is 9 months old.

When you make no dig beds on the top of existing perennial weed roots, there is almost always some follow-up work to do. It’s important to keep pulling any regrowth. Sometimes use a trowel to remove a little more root than comes out when you pull.

We have some larger areas under polythene and a very vigorous hogweed, so we pulled the polythene back and used a spade to lever out more of the top growth than would be possible with a trowel. This area has yet to be finished with compost mulch.

I was thrilled to see that the Scottish government esteem my online courses! I don’t know of any other countries following this approach, which is for women in agriculture (sorry men!). And the readers of GYO magazine have nominated me for some awards, and they have many many categories of voting!