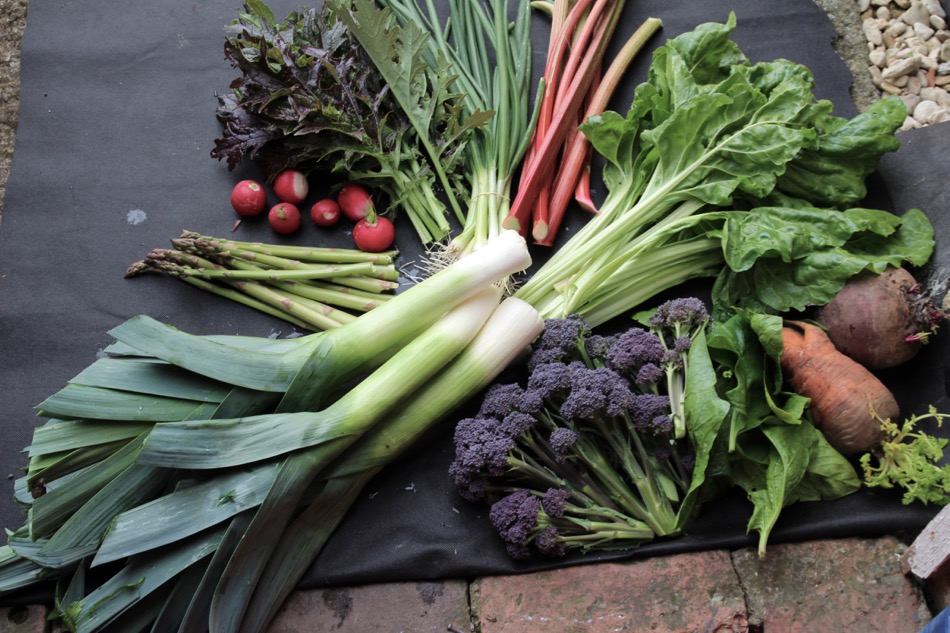 A burst of warmth, now spring reminds us that it is indeed spring and not summer. For much of the UK, there are still frosts to contend with, except perhaps in built-up areas. At Homeacres there is already some apple blossom, and it may be damaged by frosts in this coming week.

Although they do not keep all frost out, fleece covers help: we lay them directly over all new plantings and sowings. I am seeing strong growth of lettuce, spinach, peas, first early potatoes, and cabbage; slower growth of onions, beetroot, coriander and dill. Parsnips and carrots have emerged, though some carrot seedlings are already disappeared, eaten by slugs

Warmth continues to be at a premium for germinating seeds, especially during the first 2-3 weeks, when it’s most worthwhile to warm your sowings. Here I do it with a hotbed, which we just topped up with fresh manure to maintain it’s core heat around 50-60C, which translates to 25-40C at surface level, just below the frame which plants sit on. I measured the temperature of compost in my tomato modules and it was above 35C for a few days, and they are fine.

Currently the heat is a little fierce but seedlings look fine. There is a little damage to some tomato leaves from ammonia gases.

In contrast, when I used an electric propagator I set it to 20C and that was good. On sunny days the compost is a lot warmer than that.

When to plant out

Rhys started a discussion about this on the forum and it sounds like my seedlings grow faster than in some other gardens, so my advice on planting say “four weeks after sowing” may be misleading if growth has been slower and seedlings are still small.

You can count true leaves, but there are no hard rules on planting stage. I plant many seedlings when they have just two true leaves, and find that they grow away more quickly than when I transplant larger seedlings. However there are exceptions:

In the photos below I describe some options in the captions.

Everything we plant at the moment can stand sone frost – lettuce, peas, Boltardy beetroot, onions are all frost hardy to a point. Hence they can go out before last frost, even in cool conditions when fleece makes a big difference. Fleece does not keep frost out but reduces it’s effect: I think fleece’s biggest benefit is protection from cold winds and from pests. I am keeping mine on for a while yet.

In total contrast, vegetables such as basil, tomatoes, summer beans and aubergines need warmth to survive, let alone grow strongly. They are killed by frost, period. So they must stay under cover for up to a month yet, until after your average last frost date, which you need to know: here it is mid May. I shall sow French and runner beans just before that, in the greenhouse, to plant outside late May when it should be warmer.

Exceptions: tomatoes are killed by frost but tolerate cool conditions, and potato leaves are killed by frost, but the plant usually survives to regrow. And slow-growing plants like aubergine, pepper and chilli can be repotted to continue growing under cover, until it’s warm enough for planting out.

Comparing dig and no dig

There are some strange differences this year and the dug bed is struggling to grow decent spinach and carrots. Both beds had the same, homemade compost (8 months old) in December, and you don’t see the compost on the dug bed as it’s in the trenches.

One of the biggest differences I notice is when sowing carrots, dropping the tiny seeds into the soft soil of the dug bed, and the less friable compost of the no dig bed. It even felt a little sticky when i drew out the shallow drill, but germination has been superb in that compost, and growth looks stronger than on the dug bed, where I have also lost half a row to slugs, and have resown.

There is some frost damage to potato leaves where they are in contact with fleece. The onion photo shows how wet the compost was and I have not needed to hoe it, hence the cracks.

Changeover time is approaching as many plants sown last autumn, which have cropped over winter and until now, approach their flowering time. All of salad rocket, mustards, tatsoi, pak choi, land cress, claytonia and lambs lettuce are making flower stems and less new leaves. Soon we shall take a last pick before twisting them out to compost. And I do not resow any of these plants until early August, after their flowering season and when there are less flea beetles to eat their leaves. The in September you can sow salads for winter, to grow undercover, as in this video about growing salad in boxes: the three old mushroom trays, filled with organic, multipurpose compost (Klaasmann) have yielded 2.32kg leaves since November, in 13 picks: see the photo below.

Now it’s the season for harvests of lettuce in particular, plus pea shoots, sorrel, spinach (from existing plants), chard, coriander and dill. Spinach however, flowers in June so is not worth sowing now: again, wait until August. You can sow all the others in April.

Now is the traditional time for purple sprouting broccoli, compared to newer varieties for summer and autumn. When buying seed, make sure to choose a variety that crops in the season you want.

My favourite is Claret F1 which grows much larger spears than any of the open pollinated ones I had grown since 1982. This year it is cropping a whole month earlier than last year, when we took a final pick in mid June.

With each week that passes, the shoots become thinner and a little more sinewy, but I think it will give nice picks for a month yet.

I do not follow all the biodynamic principles, but do appreciate the soil enlivening preparation made from fresh cow manure, and buried in a horn overwinter. It looks that some scientists and others dislike this for a lack of “measurable quantities” or whatever, such as the professor who declined to review my Myths book because it mentions biodynamics – even though it does not, but it considers planting by the moon, which is not biodynamic.

I digress. On April 1st, after a rare shower of rain, Steph and I stirred then spread the energised horn manure. As I understand b.d, it’s not about spreading nutrients or microbes, just energy, or good feelings.

Any sceptical thoughts can be softened by considering Avignonese vineyard in Montepulciano, Tuscany. The owner Virginie Savery has converted 190ha of vines to biodynamic, and her 100 employees are grateful for having no more poisons to spray on the land and vines. I heard her speak in Italy where she said how her soil has transformed from dense to more aerated, mainly from use of the horn manure preparation.

Christina’s no dig allotment in Ilkeston. It was cleared from a wasted state by her partner Robin Baxter, and he grow salad for sale in Nottingham.

Now Robin is creating a new garden for mentally ill people, funded by the NHS.