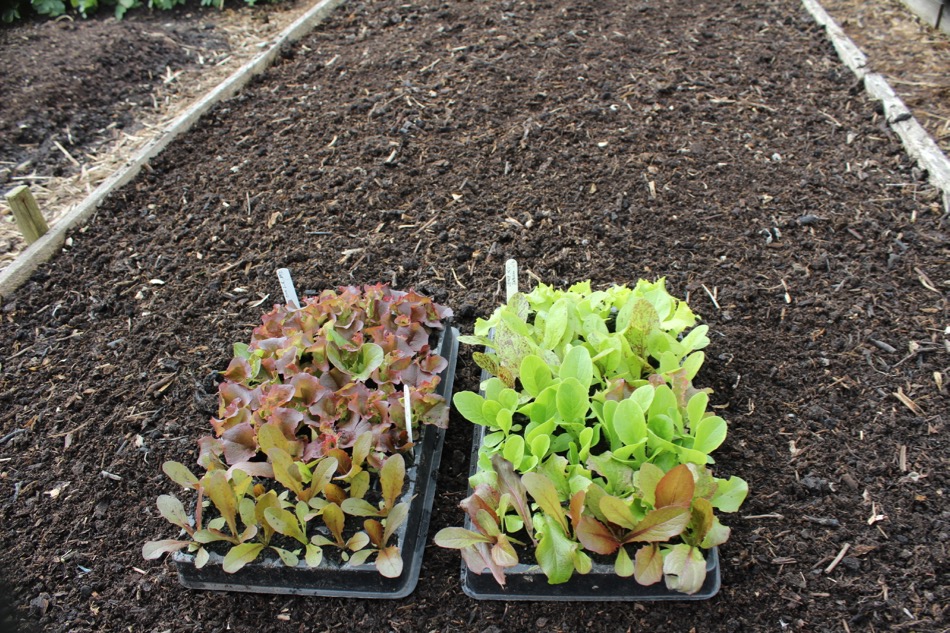 March was almost the coolest month of the winter: monthly averages here were 11.3C in December (freaky), 6.5C in January, 5.6C in February and 5.7C in March.

Its amazing what plants can weather, as long as they are sown in the right time. March here has seen 14 frosty mornings, but there is strong growth from outdoor peas, broad beans, spinach, lettuce, sorrel, parsley, kale, cabbage and leeks. Some were overwintered, some sown undercover and then fleece laid over after planting. Fleece keeps cold winds at bay, but it does not keep frost out, so its still far too early to plant out anything like courgettes.

Now is last call to sow celeriac (scatter seeds on moist compost, glass over and keep warm) and tomatoes, but many other veg are ongoing. Peas are better sown early in the month, because later sowings run into mildew and moth in July. Broad beans also do better from being either sown already or sowing asap, to be strong-leaved before aphids establish.

We are potting yacon buds and oca roots, to start undercover (frost free) and plant out mid May. Felix (my German student helper, here until July) pricked out tomatoes yesterday so it was their first night in the greenhouse, with an air temperature of only 0C indoors! Their trays are sitting on the hotbed and the module compost’s temperature as I write (its frosty outside) is 9C.

Other warmth loving plants to sow now are basil and melon, for growing undercover. Though if you plan to plant them outdoors, sow after mid month, always in warmth to get them going. I am sowing my cucumbers for the greenhouse in mid April and cucumbers to grow outdoors in mid May. Courgettes to grow outdoors, sow in mid April, along with squashes.

Potatoes!! Now is the time, unless you are in a frost free area and have already set them out. We are planting first earlies now, second earlies and maincrop next week. Up to April’s third week is good, and don’t worry if you have not chitted them, they still grow!

Onion sets are bursting to grow in the ground and its fine to plant them if shooting already. Sometimes birds pull them up, looking for worms underneath, and laying a net over the bed for 3-4 weeks prevents that. Its getting late for sowing bulb onions direct, but sow spring onions at any time.

Carrots and parsnips are also right in season to sow. You probably have some weeds already germinating on their seedbed so a light hoeing before sowing will clean up the surface soil and compost, making the next weeding easier, two to three weeks after sowing. Pop a few radish seed in the drills so that you can see the lines within a week.

You can sow Boltardy beetroot outside now, though beware of birds and woodlice nibbling their first leaves, also leeks and chard are almost in time for outdoor sowing, though I find that mid April is better here.

I have been marvelling at the wonder of fleece because of the difference it makes to early plantings. There has been a lot of cold wind here, and some heavy downpours of rain and hail, but all plants under fleece are in a protected microclimate. Then in any sunshine, which is already strong (the same as in early September), there is an instant increase of temperature in both soil and the air around leaves. Especially when the fleece is laid flat over plants, as in my photos. I have been practising this every spring since 1983 and it has always worked a treat. The only time I would use hoops to support fleece is for say courgettes and any frost sensitive plants, whose leaves are singed where in contact with the icy cover.

Stay ahead of weeds

Watch and react. Weed seeds are responding to spring vibes and you can quickly clear the surface soil and compost of thousands, by hoeing when they are still tiny. My goal is to hoe before they can grow any true leaves, when just the first two cotyledons are visible. At first sight you may think there are no weeds at all, but keep looking! Then on a dry day when seeing that first shimmer of weed leaf, run a hoe through the top inch or so (2-4cm), so that weed roots are disturbed or cut, and then they shrivel before barely making any growth.

If its constantly wet, do some hand weeding of little weed seedlings. Its much quicker than having to remove large weeds. Grass weeds need pulling by hand too, as they mostly regrow after hoeing.

Perennial weeds grow from established roots and need either a light excluding mulch, if the ground is full of them, or regular removal of new growth with a trowel. Three years ago, Homeacres soil was full of perennial weeds and I mulched thoroughly in the first spring and summer. Now all the couch grass has gone, bindweed is extremely weak and life is simpler.

See also the weed photos comparing dug and undug soil, in the next section.

Outdoor veg for the hungry gap, weeds in dug/undug

The lean time for fresh vegetables is approaching, as winter roots finish. However we still have beetroot, from a June sowing harvested in December and kept in a crate in the shed. Also potatoes  and carrots kept in paper sacks, enough to last until May I think, although they are sprouting more now, which pulls some of the goodness out. Celeriac on the other hand does not sprout.

Outside the leeks sown in modules on April 24th, then planted after a potato harvest, are good to harvest for 2-3 weeks until they make flower stems, which are edible when young. Annual and perennial kale are fantastic greens for April, likewise spring cabbages and onions sown last August.

Polytunnel veg for the hungry gap

Seeing these photos from Steph’s polytunnel may bring you to wish for such a structure; see her blog for more about how she grew them. The Red Russian kale can also be grown outside, but undercover it grows a lot more leaves and they are exceptionally tender, great for her massaged kale dish.

The carrots were sown October 19th and grew slowly through winter. Now they are fattening up rapidly, even since the photo on March 27th. Any frost-resistant vegetable can be overwintered in a greenhouse or tunnel.

I was sent these impressive photos by a small group from Brockweir, near Chepstow, who cleared a woodland since 2009 to create an abundant growing space. They needed to dig out a lot of boulders and woody plants, now it is no dig and with plenty of wood chip mulch, mostly for the paths.

Grow chicory for beautiful hearts of radicchio, dense and bittersweet, or for chicons