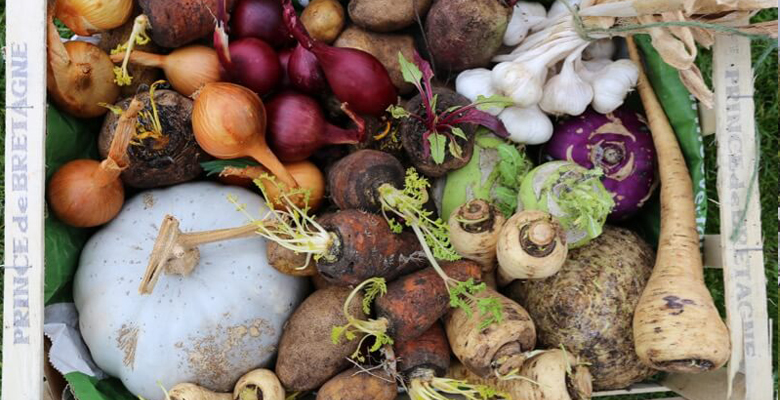 The first two weeks of April here were more like December, in terms of light levels. However after the new moon tonight (15th-16th) and it’s associated rain, there is a change to ten days of warmer and sunnier conditions.

Transplanting, yes you can!

All vegetables can be transplanted. The only ones that are difficult are parsnip and carrot, because of damage to their taproot, unless you plant them when very small.

Recently we were surprised to read advice in a magazine advising against sowing radish and turnip in modules, and suggesting that you have to direct sow spinach, lettuce and oriental greens. This is untrue: be wary of believing everything written (or spoken) as there is a lot of misleading information out there.

From being asked so often about plant raising, I decided to make a video on the subject. It is proving popular.

How long to leave fleece covers on depends on the weather. If hot and dry, fleece needs to come off, but  in our part of the world it’s rarely the case in April. I plan to leave the covers here in place for another two weeks, partly also because they protect seedlings against rabbits.

Now we enter a new and very different phase of sowing and propagating plants that need warmth all the time, also they die if frozen. Their seeds germinate well at a constant 20 or 25C/68-77F (or higher), rather than in warm days but cool nights. Therefore windowsills are worthwhile for the first week after sowing, to maintain warmth.

The coming two weeks are excellent for sowing basil and all cucurbits, from squash to cucumber, strictly under cover only and for planting outside a month or so after sowing. Check my sowing timeline for more details and ideas.

Steph and I created a no dig bed with four parts, each of which has a different compost as the surface layer of 4cm, about 1.5in depth. Underneath is the same base layer of 3in composted cow manure, then 1.5in green waste compost.

We planted 6 potatoes and 18 onion sets in each square.

Now there is more green material from the garden, you need to balance it with brown ingredients such as paper, old leaves, woody prunings and cardboard. My main heap is now over often 70C near the surface, from the higher proportion of green (compared to winter) and thanks to regular new additions.

I am trialling a Rotol compost bin and after loading it with grass mowings layered with straw, cardboard and twigs, it reached 67C in two days. Within a week the level was below halfway, then I refilled with similar materials.

The photo of stored veg, taken here on 10th April, is of summer and autumn harvests. Storing is not difficult:

We are harvesting under cover for another two weeks or so. However outdoors there is sorrel, wild rocket, chervil becoming abundant, land cress and spinach. It is such a slow spring!

This time last year we were already picking a few outdoor lettuce leaves, whereas this year the lettuce are still seedlings, barely grown since transplanting three weeks ago.

It was a bad early March for perennial kale, many of mine were almost killed by the freezing winds that preceded the first snow. Best survival was of a plant near to the shelter of a shed.

In contrast, spinach survived fine without any protection, except a bird net against eating by rabbits. Coriander also is fine, chervil is rampant now, as are many salad plants.

Tips on dealing with an overgrown allotment

I gave this advice to Ron in Bristol, who plans to tame part of a very weedy plot, and wondered if cardboard + 4in/10cm compost is enough, after he will have strimmed the weeds.    He does not want to cover with polythene.

A nice comment on pricking out, to my lettuce video, from Teresa Grodi in Ohio

The very day you posted this video, I had my lettuce seed packets on the table ready to plant! I had never had luck with germinating lettuce indoors. I always had to plant in the ground to get anything. I went to the store that very day and purchased vermiculite and followed your directions. I got PERFECT germination and pricked out the seedlings. I now have about 30 plants preparing to be transplanted.