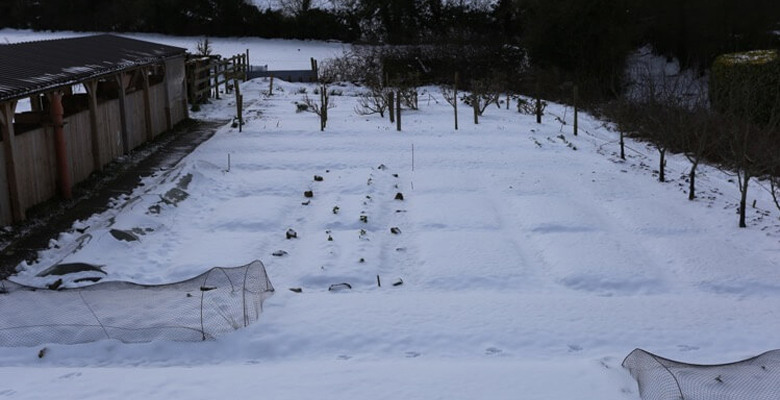 It’s the weather stupid! April is starting very wet here, cold and even colder to the north. We are late with outdoor sowings and plantings, I have not even sown parsnips yet. This blog looks at ways to succeed in adverse conditions, for example and paradoxically by setting out plants when small. For two reasons:

1 When sown in their right season, small plants can adapt and settle more quickly than large ones

2 This frees up propagation space for all the other plants we need to grow!

Keeping the garden tidy means you stay on top of weeds, reduce slug habitat and can harvest more quickly, with less sorting of old leaves. I spent an hour and a half on the small garden pictured, weeding and removing yellowing leaves, then a light hoe of the surface compost. That is partly to knock out lumps and level the surface, mainly to disturb weeds that are just germinating.

It’s so disappointing when sowings have no result, and I was shocked by the non-appearance of some Kings beetroot, compared to beetroot of other companies. On this forum post Stringfellow notes the non-appearance of Dobie’s onions, and Rhys has poor growth from Organic Gardening Catalogue onions and beetroot. And some. The photos show beetroot sown on the same day, from four packets.

So it’s a widespread issue. You can I email to complain and receive free seed in recompense, but you have lost all that time, compost and space in the greenhouse or garden while nothing grows.

In a cold spring, perennial vegetables and any that you sowed last summer or autumn are valuable. They have well established roots and can grow much faster than new seedlings. If you have a polytunnel, cloche or fleece and mesh, these help a lot!

See how hardy these onions and broad beans are. The beans are not too large: most problems from winter weather are when the beans were sown too early and have longer stems, which risk rotting in extreme weather. Mine were sown December, when temperatures were similar to now!

Size of plants to plant!

There is much uncertainty over this and generally I find that small plants get away best, say in 3cm modules, no potting on. Often 4 weeks old but currently at 6 weeks since sowing, after a dull March.

We do not harden them off, they go straight in the ground, then fleece on top. See next para too.

Small plants are resilient, especially when homegrown, not mollycoddled in perfect conditions. Five days after planting small peas (for shoots), the fleece cover was buried under snow, all sitting on the peas, no hoops to support the fleece. A week later we pulled back the fleece to hoe, and found 100% survival of healthy plants.

Recently we planted a bed with small coriander, dill and salad rocket sown in February, then laid 30gsm fleece over.

To maintain heat, we have twice added 3-4 barrowful of fresh stable manure (horse droppings and straw), after removing the top layer, which is then put back over the new manure. This helps dilute the arrival of ammonia gases at the surface, which risk damaging some seedling leaves.

After this refill the temperature was just 9C in the new manure, rising to 36C within two days.

The month’s second significant snowfall was at least not accompanied by bitter winds, except briefly afterwards.

Longer days mean stronger growth, even if the temperatures stay low. Any brief appearance of the sun is more intense and we notice when picking that leaves feel more robust with every passing week. The undercover salads are now in their fifth month of harvest, from September sowing.

Unusual veg and drainage no dig

My clump of skirret, replanted two years ago, has given some small but exceptionally tasty roots. The yield is not huge and potatoes always win that comparison. We harvested them by pulling and some spadework after a deluge of rain, yet the soil was fine to walk on and well structured to the eye, as we harvested.

Also we harvested some Chinese artichoke, which are starting to grow again. They are of the mint family and have no great flavour, a bit nutty. For the time involved (they are small!) I am unimpressed – and they can take over like a weed.

I decided to plant a fruiting hedge of Juneberries (Amelanchier) and Sea Buckthorn in Homeacres far corner, where it had been brambles, grass, bindweed, nettles and and thistles. We used a spade to remove brambles’ main stems and to make a hole for the hedge trees, otherwise it’s all mulched with cardboard, wood shavings and two layers of landscape fabric, plus a little compost around each tree.

SLUGS
On heavy soils, near walls and bushes, in shady areas…. there are slugs (and snails) lurking. In wet weather, especially during summer, they are more active and, to avoid using poison pellets, I recommend being prepared as follows:

1 Keep soil around tender plants such as salads and carrot seedlings clear of weeds at all times, plus remove any yellowing leaves before they fall on the ground

2 Grow vegetables that are in season and able to grow away from slug damage, for example do not sow lettuce outdoors in February or runner beans in April (both too early)

4 Traps filled with beer, upturned and hollowed citrus skins and old cabbage leaves etc etc make excellent refuges for slugs which can be collected regularly (I either cut them or feed them to hens)

5 Many salads can be spaced a little wider (on average 22x22cm or 9×9″) and then picked frequently to keep plants quite small and with bare soil around them, helping to offer less hiding place for slugs

6 Keeping soil in good heart, no dig and with a mulch of compost on top, enables plants to grow more healthily and keep ahead of occasional nibbling

8 Have open- rather than wood-sided beds, especially softwood which offers hiding places to slugs as it decays.

Article: A taste for growing