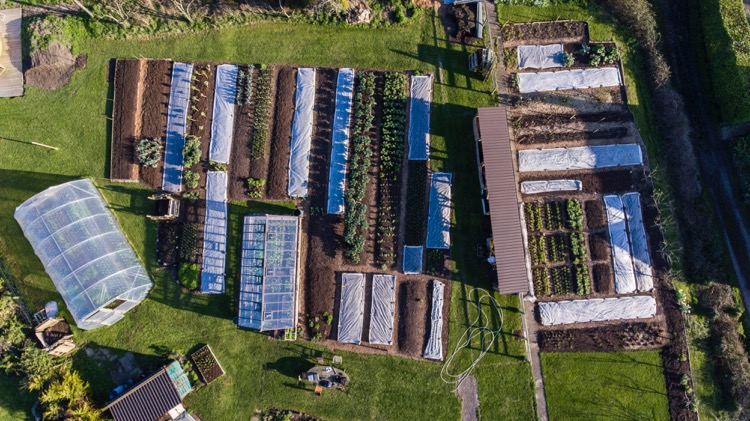 Early spring can be deceptive, with the temporary warmth of strong sunshine, yet with cold winds. Stick to your known best times for sowing, and don’t be tempted to sow earlier. For example I have not yet sown any courgettes, sweetcorn, basil or cucumber, while I sowed tomatoes recently on 18th March, now just emerging on a windowsill.

April’s outdoor sowing and planting is vegetables which survive some freezing. A fleece over them keeps cold wind off, and also protects from pests.

Sunlight levels are currently the same as in mid September, which is why fleece helps so much, because it converts sunlight to warmth. Some light is lost but there is a net gain to growth. My preferred thickness of fleece is 25gsm but it’s now hard to find and the heavier 30 or 35gsm tends to overheat in any April heatwave, unless you keep seedlings moist. Incidentally you can water through fleece.

Homeacres is in a frost hollow and we had two recent mornings of -2C/28F which slows new growth. I am noticing the hedges here have fewer leaves open then hedges on nearby hills where there is less frost. Frost may damage plum and pear blossom, about to open, encouraged by afternoon temperatures of 10-13C/50sF.

Starting out no dig

No dig includes practices which contradict ‘official’ teaching, and this does cause confusion – I suggest reading my FAQs where your questions may be answered.

A major misunderstanding is that no dig means you need more compost, as per this comment on a Facebook discussion about no dig:

Unfortunately I can’t get the amount of mulch and compost I’d need to go ‘no dig’ in my garden, and the weeds would have a field day.

In fact the opposite is true because if soil is dug or tilled, some of its carbon (from organic matter) oxidises to CO2. Digging also stimulates bacterial breakdown of organic matter, giving growth for a while as soil uses its reserves. Plus soil disturbance encourages weed germination and growth: weeds are not vegetables, they grow more in poor and damaged soils.

I recommend starting with a lot of compost not because no dig needs it, but because vegetables grow better for it, and weeds grow less. So the compost means big savings of time, high yields mean a smaller area needed for similar harvests, and after year one you need less compost every year, for wonderful growth.

I had this comment from Helen King at her allotment this March:

I went to my new allotment last Sunday, got there, didn’t know where to start and just stared at it!

Helen subsequently came to a talk I gave and said she felt confident now about starting with mulch over weeds.

I have sowed carrots already, in view of the mild weather, but there is no rush – last year they grew well from sowing early April, cropping in June. The drills are 1-2cm/half inch deep, made with the corner of a rake or a long dibber.

After sowing and with the compost already dry on its surface, and no rain in the weather forecast, I walked on the bed to firm it and retain moisture. This firms the surface but does not compact the soil below, which has a firm yet open structure, maintained by soil organisms such as earthworms.

Now the bed is fleeced over and I hope to see carrot leaves about two weeks from sowing. We sowed a few radish too, to mark the lines and for an extra harvest, one radish seed per 5cm/2in.

I often say how no dig means fewer weeds, however an exception is if your surface compost has many weed seeds.

At Homeacres I experience this when spreading old cow manure where weeds had been allowed to speed on the heap by the farmer (fathen mostly), and when I am careless! Four weeks ago I spread some mushroom compost and scraped a little of the surface soil when loading my barrow: this soil had been growing many weeds going to seed. Result, many weeds germinating among newly planted peas.

There were thousands, too many to weed by hand and if this happens you must react quickly, to hoe or rake when they are still at two leaf stage, before the roots become strong. I found raking best, swinging gently through the surface to break up the compost lumps and expose weed roots to the dry air. Hoeing in this case was less effective, leaving lumps more intact. You need a dry day for this to work.

Size of seedlings to plant

I was asked if it works to plant seedlings even at two leaf stage, outside. In principle this can work but my observations are:

1 Speed of growth is usually faster undercover at this time of year – although if the weather is warmer than usual, the difference is less.

2 Pests such as slugs do more damage to tiny seedlings, compared to slightly larger plants, so you may lose more plants – two bites and they are gone!

3 It’s a great practice in that small plants adapt more quickly after planting than large ones: I am often planting at an earlier stage than is recommended generally, especially in summer. See the onion photos in the next paragraph below.

I suggest being flexible, because other factors include when you have time to plant, and the weather.

Here is another example of small plants. This was not planned but happened after I did a trial of mixing some homemade compost into the potting compost, and onion growth was very poor! Showing how much undecomposed wood is in my compost, which is great as a surface mulch, not for potting.

So we sowed again, and tried some blocks too, using a wet mix of three quarters multipurpose compost, one quarter soil. The compost is 50% recycled peat, and peat does help for making blocks. I am trying a few things and like the potential of blocks for saving module plastic, however they take longer to make – see Ladbrookes site, their blockers are good. Seed trays are best option for putting blocks into.

How fine should compost be when sowing and planting? The photos give some ideas. One thing I never do is to sieve compost: some lumps and pieces of wood on the surface are a good mulch.

Most problems I hear about are from using undecomposed manures with lumps of bedding such as straw. If you have a surface like that, rake through to break up the lumps, which need air to decompose more. Watch out for slugs in the moist lumps, such conditions are not good for sowing carrots or salads, but you could plant potatoes.

Compost is soil food more than for plants directly, see my video No Dig Feed the Soil. I had a nice comment on this one from Ineke van Oorschot

Great information for me as a beginner🙂👍

Currently Which? Gardening are running articles about no dig, photographed last year by Jonathan Buckley – Instagram @jonathanbuckleyphotography. This year we have Jason Ingram (jasoningram) photographing the small/family garden every month, to show what you could grow in 25sqm/270sqft, no dig with successional planting. See the spring video here.

I also enjoyed working with Huw Richards to make many new videos, both for his and my channel on You Tube. A first one this coming weekend is the small garden in spring. We started at dawn in the frost, it was cold but the results will be great. Huw took the aerial view as well.

See this article in Weleda magazine, in German, and spot the photograph error!

For any of you with deer problems

I solved the deer problem in my garden last year!  I strung 3 strands of 30 lb clear fishing line around the garden, like you would barbed wire but the top one 5 feet high.  The deer touch it but can’t see it and are spooked.  They don’t jump over because they aren’t sure where the top is.  Make sure it’s 30 lb line, because they break 20 lb and they SEE 40 lb line. Don’t hang anything on the line.  You need for the deer to not know how high it goes.

40 thoughts on “April 2019 sowing and planting, no dig advice and dealing with weeds”