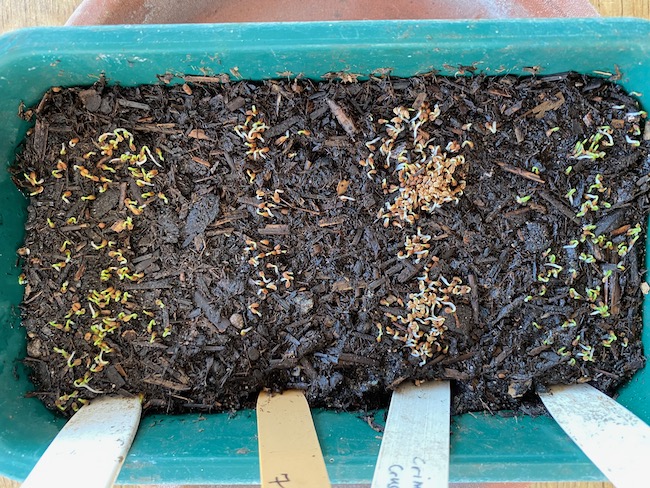 Transplanting times are here, but watch out for cold weather too. Plants ready now are frost hardy, such as lettuce, peas, onions and broccoli. I advise to wait until mid April before sowing frost tender cucurbits, even under cover. While beans can wait until May.

My new online course 3 is full of these details. It’s a huge resource with many new Edward videos! Soon we shall release it lesson by lesson, so that you can choose the vegetables you want to know more about.

There are still plenty of winter vegetables, so we are not yet in the hungry gap. The parsnips I harvested recently will keep for two or three weeks in the shed, where also we have beetroot, carrots and celeriac. In the conservatory are onions, garlic and squash, while outside leeks should continue through April, and grow more.

Plus broccoli is beginning, always an exciting moment. I value it more now, than if it was an early variety in winter.

Transplants from the mid February sowings come ready to plant out at different times, according to the size of module trays you use, and the quality of compost. My new online course 3 has the range of transplanting dates for 40 main vegetables, and also a harvesting timeline.

So far we have transplanted salad onions, lettuce, spinach, peas for shoots, beetroot and some onions. We are about halfway through this first batch of planting. Usually we do it with two people – I dib the holes and Adam or Briony or Emma pop in the plants. I do not harden off, plants come straight from the unheated greenhouse., this saves much time, and fleece protects them after planting.

Root damage from transplanting? The main thing is that the general integrity of each plant’s root system stays intact, while there may be a little damage around the edge, and plants quickly recover from that.

There is still time to sow tomatoes undercover. Mine are just appearing from being sown 10 days ago. Early April is a top time for sowing leeks and basil. Around mid April I sow chard, after finding that if sown earlier, some plants tend to bolt during the summer. See my Calendar for more dates.

I am pleased and relieved to notice that the Moorland Gold compost, which started so badly, is now growing very nice plants.

I think it was too fresh at the beginning and this affected the early germination in particular. I have never found it necessary to use a special seed compost but in this case it would have been better.

If your sowing has fallen behind, a great source of transplants is the Delfland Organic Nursery, and here is their newsletter which has detail about vegetables to sow and grow now.

DAMPING OFF is a sudden collapsing  of seedlings, soon after germination, caused by too-frequent watering mainly. Also from insufficient ventilation, and trays which have probably too many seedlings. The results of these three things is that leaves stay wet all the time, and fungal parasites can turn them mouldy. Then the seedlings die.

I am pleased with this first spring of using my new module trays, and I hope you also are having good results. I find it needs about 2 L of compost to fill them, and you can see the size of plants which grow, which are fine for transplanting outside. They slide out nice and easily, and the trays are firm  which makes them easy to hold in one hand, while popping seedlings into holes with the other hand. In the UK, top sellers are The Refill Room.

I was sent photos of broad beans growing in the CD 60, by Jan in Cambridgeshire. She had noticed that I advised against doing this, and her experience shows you can! But let seedlings grow a bit so that all seed energy is used, otherwise rodents may eat the still-emptying seeds after you transplant.

It’s still early for sowing outside, and the only seeds we have put in direct are carrots and parsnips. We put just a few radish seed in the drills about 5 cm apart, and the sowings are now covered with fleece for warmth.

We have used a lot of cardboard this spring for making new beds. If it were not for taking in new ground, I would not be using any cardboard for beds or paths.

Common questions about using cardboard are how soon after making a new bed with card at the bottom, can you plant. The answer is immediately. As long as it stays damp, cardboard decomposes gradually and within say two months, roots of vegetables from above can pass through into the soil below, while also weeds can push upwards. The effect is temporary and very useful.

Do you have to remove it? No never, it decomposes in situ.

Does it have poisonous chemicals? I cannot find evidence for this and the glues appear to be mostly starch and water. However there apparently are studies in Germany indicating some problems.

We are gradually creating new beds and planting areas on the new land – see my Course book for details. Around 280 m² or 10,000 ft² has been under polythene since January, also with varying amounts of cardboard, soil, and compost.

Some of the pasture growth is dead, most is half dead and needs light exclusion for longer. Plus we need to keep removing some strong regrowth of for example wild chervil and burdock.

We selected some of the nicest Boltardy beetroot from last December, and transplanted them at 40 cm spacing. All being well they grow strong stems, flower and cross pollinate and we can collect seeds in late summer. I have not done this before so I’m not certain of success!

Likewise we have transplanted 10 onion bulbs, and seven carrots. After doing that I read that 40 carrots is advisable for a good gene pool, and I do not have that many excellent ones. I had not covered the carrots, and rabbits found them! So now they are under mesh.

By mid March about 2/3 of the small garden bed space was available for new planting, and we filled it all up at equinox. I find the spring equinox is a nice time for sowing and planting in this climate. You can see progress in the new video, publishing 31st March on You Tube.

When I started gardening 40 years ago, this resource barely existed. Now it is amazingly common and has so many uses. Its value, clean with no chemical residues, has also been heightened by problems with weedkiller in manure.

I am delighted to have found a source of both old and new woodchip, from the pile of a local tree surgeon. He sells it for £60 plus VAT for around three tons.

The Johnson Su method is getting a little more known now and we just made a proper version of their bioreactor, after my initial rather botched attempt last year. The main difference is that I purchased some proper weld mesh, which I believe is mostly used in making concrete floors. It’s much stronger than shockproof fencing.

Adam filled it with new woodchip, after cutting holes in the pallet which keeps the drainpipes in place. About three days after filling and watering, he pulled out the pipes, which leaves nice air holes right the way from top to bottom. It’s an aerobic way to compost wood chip.