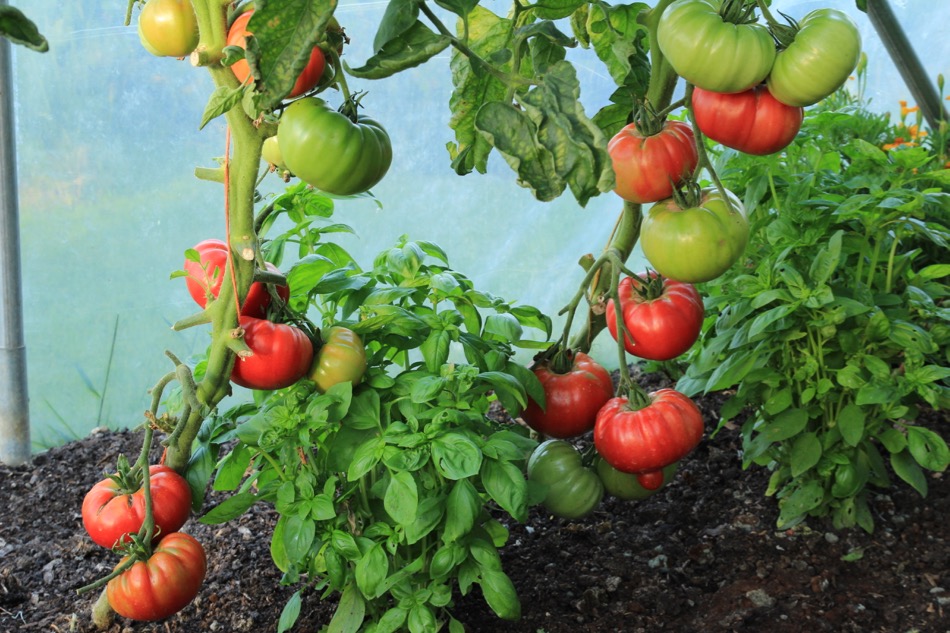 With no dig, summer is a good time: little weeding, lots of picking, and nice feedback from happy plants. The exceptions here are cucumbers and melons, see below. Also I am spending more time watering than usual and offer some advice on that.

There is still time to sow the usual August leaves: rocket, mustards, pak choi, tatsoi, coriander, chervil and dill. Its last call to sow spinach for autumn, winter and spring. Early this week on 15th and 16th are days of waxing moon energy.

Towards month’s end is time to sow spring onions, spring cabbage and bulb onions, to overwinter as small plants, for harvest next year.

Growth in the last six weeks has been fast, especially when plants have been well watered to get them established. Once underway, I leave beetroot and purple sprouting broccoli to their own devices, they tick over in dry weather and then grow massively when it rains.

Brassicas however are attracting a lot of butterflies and moths, so I have sprayed bacillus thurigensis for the second time. All my brassicas are unmeshed, I am lucky to have no hungry pigeons at this time.

Leeks and winter carrots are under mesh, against the moth and root fly respectively. Just to see, I have left some leeks uncovered and spray a little bt into their growing point every fortnight or so, against the larva of leek moth.

On August 1st we had 30mm wonderful rain, since then its been dry and I am watering more than usual, especially lettuce and other salads, every three days on average, enough to soak in. Also outdoors  I am watering

I am not watering parsnips, perennial kale, winter carrots, winter squash and maturing crops like the lentils below.

Fortunately and so far, there is no evidence here of lettuce root aphid, which caused so much damage last year. I have some endive and chicory in case of that: Frenzy endive is cropping well, slightly bitter and very pretty, frizzy leaves which we pick as for lettuce, weekly.

If you still have onions in the ground, they are better harvested by month’s end so there is time to get them dry before damp weather installs.

If you have not already, pinch out all growing points so that plants cannot make new trusses. Instead they use all energy to grow and ripen what is there already. Autumn is close: six weeks from now, its October.

My tomatoes are not as good as last year, from lower sunshine levels I think. Best plants are in the greenhouse where its warmer, while in the polytunnel there is blight on a few leaves, which I keep removing.

I am impressed with Maskotka bush tomato in an airpot, its roots aerated by holes all around – have you ever noticed how roots circle the edge of pots? One Maskotka in a clay pot has grown much less. Another in a recycled (free!) plastic mushroom box – plastic sides with many holes, thin lining of newspaper – has grown even better than the airpot plant: same successful principle, from a free resource.

Out of nowhere, my cucumbers and melons have been ailing and failing in just the last fortnight. Is it cucumber mosaic virus? I am not sure, have not had it before.Older leaves develop yellow/brown areas, fruit become a little deformed and smaller, skin still good.

The polytunnel cucumbers were first to succumb and half the plants are now removed, then the polytunnel melons. In the last week, the outdoor cucumbers on the dig/no dig beds are succumbing: first damage was on the dug bed and within a week there was hardly a healthy leaf.

Interestingly, cucumbers in the greenhouse are fine at present, in the same soil, same watering regime etc.

Videos have been coming thick and fast from Edward’s creative camera, then he edits with Final Cut Pro: see the tour of Homeacres in late July.

Gardeners World filmed here on August 10th, to celebrate my work as a ‘gamechanger’. The six minute film will be shown sometime next year and I shall let you know the date. There will be archive clips of the programme I made with Geoff Hamilton in 1988. He was lovely to work with and the producer thinks I helped persuade him of the viability of organic growing, at a time when it was widely questioned.

Another early organic pioneer was Darina Allen from Ballymaloe Cookery School, and we were delighted to welcome her and farmer husband Tim for a visit to Homeacres. She is a bundle of energy and always fun to chat with. They were on a tour of organic farms and kitchens in south west England, but had noticed many economic worries compared to 15 years ago.

I was invited to speak at West Dean Chilli Festival and its brilliant, do go if you can next August 10,000 people make a great atmosphere with music, entertainments and everything chilli to see and taste.

Plus you can see the gardens and again, I was impressed at every turn: Sarah Wain and Jim Buckland are so experienced and know every inch of the place: its immaculate, beautiful and productive.

Homeacres is looking so pretty in late summer and it should be good for the open day on 4th September.

I am noticing this summer how healthy and abundant the Czar beans are, now it is six years since I first grew them, so the seed has become imbued with healthy, Somerset energy. See below for links to an event in Lincolnshire about seed saving.