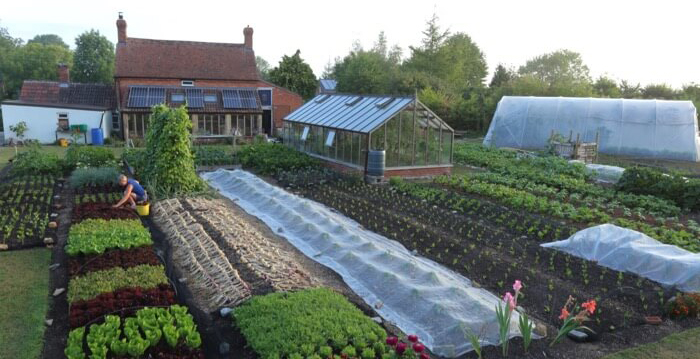 A second spring after some rain, still warm, days reasonably long – what are you waiting for? One days growth in August is two in September, four in October, eight in November, 16 in December and a half in July! The two photos show growth in just eight days.

Different benefits of no dig become apparent as weather and the seasons change. Even in wet weather you can walk on no dig beds, while moisture conservation has been fantastic this summer, and in every season the reduced weed growth of no dig is a huge blessing and time saver. Steph and I weeded the beds of Homeacres dig/no dig trial and she is holding the results. In terms of time it was nine minutes weeding the dig bed, and three on the no dig. Harvests so far in 2018 are 36kg dig, 53kg no dig, but dig is catching up a little now.

True spinach (Medania type) is good to sow now and as soon as possible, for harvests in autumn as well as next spring, it’s so hardy. Sow salad rocket and oriental leaves of all kinds, for autumn harvests outside: wait until September to sow for winter harvests under cover.

Coriander, chervil and dill can all be sown now for autumn picking, and may survive winter too. Chervil is the most hardy, coriander middling (my Cruiser came through last winter, without protection outside) and dill does not like too much frost.

If you sowed the seeds in July, now is still good to plant lettuce, chicory and endive for autumn harvests. We are planting kohlrabi and bulb fennel too.

You may have done this already and don’t delay. The idea is to prevent plants from wasting energy on futile new trusses which run out of time to ripen their fruit. Instead. all energy from photosynthesis goes into developing existing fruit and ripening most of it by October. After mid October, at this latitude at least (51) the level of light is too low to enable tasty fruit.

Remove lower leaves but leave at least the top half of leaf growth on cordon plants.

We are taking great harvests from this 25sqm/270sqft area, of three beds, each bed cropping an average of four different vegetables. Most of the current plantings, see video update of July, are following earlier summer harvests of broad beans, spinach, carrots, beetroot, lettuce, turnips, sorrel, cabbage and calabrese.

The only planting to receive extra compost was Cavolo Nero kale, because the spinach it followed had been planted last August, and received no compost in winter. I spread 40 litres of West Riding multipurpose compost and it certainly increased growth. Other beds had 1.5in/4cm homemade compost last December.

Until 8th August it was desperately dry, then we had 29mm/1.2in rain in five days, a big help. We are still watering salads and new plantings, but other veg can manage now for a while. I have yet to water celeriac and they look fine.

On the other hand I have started to water the raspberries, so that fruit swell more.

Rainfall has mostly been as storms so totals are variable from place to place, and I hope you had something worthwhile, without damaging hail.

Phoebe Grubb from Chagford, on Dartmoor in Devon took on a weedy allotment in January 2016. After two years of reasonable results, she attended a weekend course at Homeacres, bought green waste compost, and has enjoyed a bountiful season. These are her photos, well done Phoebe for such a clear record of progress. After the course, Phoebe wrote:

“Your garden and way of growing is so inspiring and exciting. Thank you so much for your patience with my myriad of questions, I really appreciate it!”

I am giving a day course near Banbury in Oxfordshire on 19th September, at a beautiful venue which is also a commercial garden for selling flowers. Plus the owners, Henrietta nd Bridget, are keen compost makers and have lots of windrows to look at.

On December 1st and 2nd I am teaching at Witzenhsusen University near Kassel, then hope to give a day course in Weinheim on Monday 3rd December, details to be confirmed.

My talk at Shankill Castle Co. Kilkenny, as part of Carlow Gardens Festival, was a complete sellout with over 100 people. It went really well in the soft Irish rain.

Visitors this summer included Phil Dudman, horticulture editor of ABC Gardening Australis, the equivalent magazine to our Gardeners World. He is enjoying great success with no dig in his Sydney garden, and prefers mulching with compost as opposed to straw, even in that dry climate.

It’s been a ratatouille summer here, with a higher proportion of aubergine than usual, since they like warmth so much. Even my outdoor aubergines on the slightly warm bed of horse manure (was my hotbed in spring) have given good harvests.

They will slow down now, and indoor plants are susceptible to red spider mite: you see leaves going pale and matt, then yellow and brittle. In my experience, once you see symptoms like that the plants are lost, don’t waste money on predators for example, they can’t increase fast enough to get on top of the problem. But consider buying predators at planting time next spring/early summer, so they can establish a population balance with the mites, which are likely to overwinter in the greenhouse/polytunnel.

I am growing soybean for the first time, and suddenly there are loads at the stage of eating green, edamame. The flavour is wonderful, after just a few minutes in boiling water, served in the pods with a little salt.

I am trying two varieties: Siverka is bred for UK conditions, has less leaves and is lower yielding this year than Green Shell. Possibly in a cooler summer the Siverka would have been more worthwhile.

Fruit is ripening a little earlier, and we even watered some apple trees in early August. Now however they are swelling nicely and Katy is sweet already.

However there is much damage from the maggots of codling moth, next year I plan to use either neem oil or pheromone traps. I know the latter work but they are expensive: neem oil comes with good recommendations, has anyone used it to protect apples from pests?