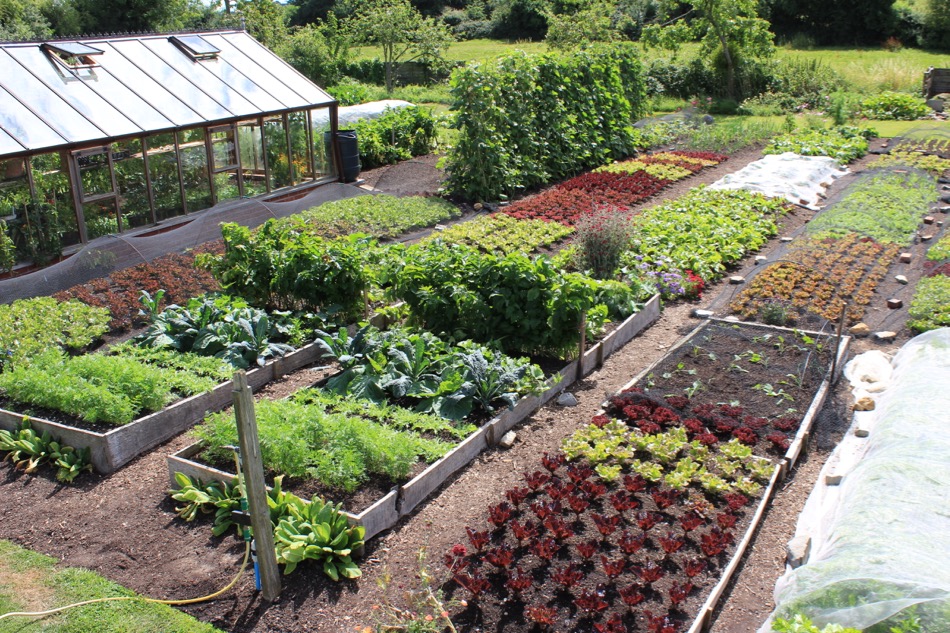 July had one hot week, I hope you had it too. It has been dry here with just 14mm  (half inch) rain in the month. My no dig approach has helped growth, with mycorrhizal fungi finding water for plant roots, in tiny crevices of soil, which are too small for roots to penetrate.

Outdoors, we have been watering salads, celeriac and all new plantings of chard, beetroot and brassicas – twice a week on average.  Check the video for more on how Homeacres looks at the moment.

Its now a good time to sow rocket and oriental leaves! In summary:

Weeds in no dig

As long as you did a thorough mulching of perennial weeds, you should be finding little new weed growth at this time of year, except for seeds blown in (hoe off as seedlings), and residual bindweed or marestail (keep pulling or removing with a trowel).

I notice more germination of annual weeds on the dug bed of my trial, where compost is dug in. On another trial where the soil is forked to “loosen it”, and compost is applied as surface mulch, weed growth is little more than on the undug, and harvests are similar this year at 55.9kg from the dug beds, 57.4kg from the undug ones with the same compost, each strip is 2x9m.

I feel a lucky man, it’s beautiful, and now has onions hanging from some of the rafters. We screwed some backing boards onto the back side. Total cost of structure around £2500 plus labour to dig the deep holes for posts.

We have planted small, ‘green-roof’ sedums into a long bed at the base. Most of this bed has an old concrete foundation (1960s greenhouse), on which we spread one to two inches soil and mushroom compost. I hope its enough for the sedum plants, which were sown on June 16th.

Charlotte continued to grow through July, when there was a lot of blight in the locality. Its health is from undug soil! The harvest was clean and fine (July 26th) with tubers swelling in the surface compost, roots going into undug soil below, which is now hard (not compact) from being so dry.

See charles_dowding on Instagram for fast harvest video of potatoes without digging.

Some Sarpo Axona are still growing, from home saved seed, for late-August harvest.

Summer lettuce is good so far, though I am nervous about the arrival of root aphids in August, especially as its so dry. Watering helps and some varieties resist the pest, such as Navara. Also its good to have some endives in reserve, we have planted a fair few Frenzy.

Tomatoes in the ground

We are approaching an end point already, to pinch out the growing tips of cordon tomatoes in August’s second week. Its not easy to do, in full summer, but directs plants’ energy into developing and ripening existing fruit. Rather than making new trusses which run out of time to ripen in autumn.

Aubergines should keep going to early October. I bought red spider predators (Phytoseilus) at vast expense, wish there was a cheaper way, last year the plants (cucumbers & beans too) suffered by September, especially in the polytunnel.

I have been impressed at the early harvests of Garden Pearl in particular, and its fine flavour, grown in the greenhouse. I tested the juice for Brix and it was higher (11) than all the soil-grown tomatoes. Maskotka was later to ripen and is cropping heavily now, but has thick skin.

Plants are in West Riding compost, no liquid feeds given, but I put two handfuls of dried chicken manure pellets on top of the compost in early July.

Felix just left after twenty weeks here of consistent, thoughtful work that has helped Homeacres garden to improve again. He wants to make his own market garden next spring, after he finishes horticulture studies at Mannheim.

Steph will be helping more now, and occasional volunteers.