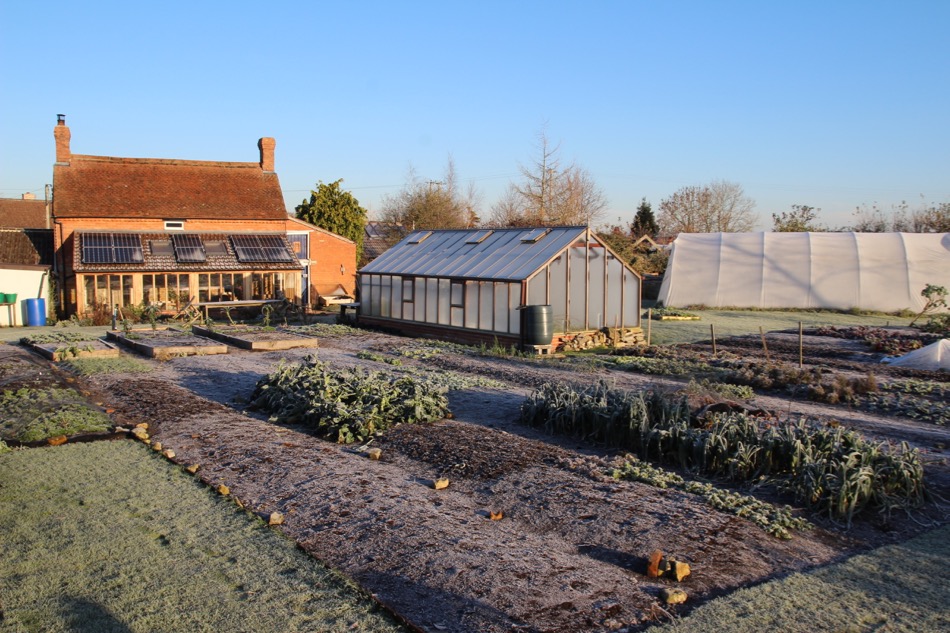 Are you ready for cold weather?  November was 4.5C (8F) cooler than last year, and December looks to be cool, perhaps with snow around the solstice. Otherwise mostly dry.

November was above average rainfall here because of the wet spell from 19th-21st (see below, no dig drainage), but otherwise it was fine and the sunshine total of 90hrs contrasts with 33hrs last November. This morning 30th it was -7C (19F) here.

I had a question on Facebook about starting no dig on community-garden beds. They were under the impression that cardboard was needed and wanted to know whether it should go at the bottom of the bed (so the ingredients dug out first) or on top, or what.

I replied that cardboard is not necessary at all, unless you have loads of weeds, couch grass etc. I was worrying whether I had misled people with my advice.

They then replied:
“Thankyou so much for your reply. It’s me getting confused, it’s watching too many clips of others starting or changing to this method and now thinking it’s them getting it wrong, haha. I understand now, think I’ll just delete the others and just have yours !!  Thanks again for taking time out to reply.”

Any existing bed which as just a few weeds that you can remove by hand, simply needs a surface dressing of one to two inches of compost, and off you go!

For new beds on weeds you need more compost, and/or cardboard first, on the weeds if there are many. In the photos I used cardboard on paths only, to smother weeds where there was no compost. One bed had just compost on the weeds, four inches. The next two beds had chopped twigs and prunings, then compost above them, like a hugelbeet only more practical. The middle bed had perhaps more long-term fertility but there were many slugs in the first six months, from the decaying greenery below.

Leeks are just superb fresh veg in cold weather, except for the early, long stemmed varieties such as Bulgarian Giant, which want eating asap.

If you are short of leeks, make a note to sow them next April, not before that or they risk bolting. We sowed the ones here in the greenhouse, three to four seeds per module, planted mostly in June. You can sow seed in drills outdoors too.

Leek moth is a pest here so some had mesh over, from planting until September, and for others I experimented with spraying small amounts of the bacteria Bacillus thuringiensis, into the heart leaves, and all my leeks are better for both approaches.

It was a happy day when my diary came from Cambrian Printers in Wales. I had the idea to write it just four months ago in August, prompted by (I thought) imminent screening of Homeacres on BBC Gardeners World. I wanted something small and convenient to offer to gardeners who might be new to no dig and to my work generally.

I teamed up with two brilliant designers in Bruton, Lucy and Robert Carter who work for top galleries and authors, and a top rank editor Elisabeth Ingles. Steph gave invaluable advice and all went smoothly, planning and writing an 80 page diary.

Then I discovered that if more than 25% of pages are writable, books are classed as stationery and attract VAT. To have the 41 writable pages I wanted, the diary needs to be 164pp altogether, and in fact it’s 168 so there is a blank page at the end for plans or notes, as well as all the week and fortnight pages to write on. It has become a book!

It has been fascinating to self publish, working with printers and finding a distributor (Troubador), selling direct and being in control of all aspects. Already I have sold nearly 300 copies, and we have posted a video to explain how the diary can help your gardening.

There is a super productive no dig garden in Holland run by Vera Greutink (GrowntoCook) who commented on my diary video: “It is amazing how difficult people find it that actually doing less (no dig) can produce better crops and better soil in the long term”. Many of you know this already, for others who are new to no dig, check these photos and the advice on this site and my You Tube channel.

We had a fantastic harvest of carrots for winter’s store, on 28th November just before the hard frosts down to -7C (19F), which is enough to damage carrots that protrude above ground. This harvest is from a bed of compost over an old gravel path, and some carrots had managed to push into the gravel, making them hard to extricate.

They were sown mid June on a waxing moon, after a harvest on this bed of 45kg spinach, from a February sowing. We added no more compost for the carrots so the only food for spinach and carrots combined was two inches of 50% old cow manure, 50% mushroom compost, spread a year ago.

Total carrot yield was 83kg, around 5kg (11lb) per 4ft (1.2m) row. Varieties were Nairobi F1, Extremo F1 and Oxhella, all of good flavour, the Othello are more stumpy and fat at their crown. The bed was covered in mesh since August and I observed remarkably little damage from the maggots of root fly, I think they had a quiet year in any case.

After clearing some climbing beans on 25th September, I planted salad rocket, winter purslane, spinach and lambs lettuce, all sown 29th August. It felt late to be planting outdoor salads, plus I needed to replant after a badger dug some up, so then I covered the bed with netting.

Despite the lack of warmth since planting, we picked on 25th November 640g lovely rocket leaves. There are three beds with the same plants, one bed was dug by forking six months ago, before planting the beans. This bed gave 150g rocket, compared to 300g from it’s neighbouring no dig bed, with the same compost. A third bed, no dig with old cow manure compost rather than mushroom or green waste, gave 190g, partly because of more slug damage.

In greenhouse and polytunnel, salads planted in October have grown steadily. WE simply pull or cut out the plants of summer crops such as basil, aubergine and tomato, walk on beds to smooth the compost and break lumps, give a massive watering, and plant. Seeds were module sown between 10th and 22nd September, and already the greenhouse salads have given around 6kg (13lb) leaves. The only ‘weeds’ are self sown marigolds, now killed by frost. No dig is so easy.

In the polytunnel, which is colder by night than the greenhouse, I covered the plants with fleece on 29th November, before the -6 to -7C frosts. Normally I do not use fleece undercover, as it keeps valuable light off plants and encourages mildew plus slugs in damp weather.

However this week, and perhaps this winter as a whole, is much colder and drier than usual, and sunnier too. Therefore the fleece’s value at night is much higher than any loss of light. And there are very few slugs compared to normal winters.

I have been watering weekly, now in the cold weather it will be fortnightly.

This was a fascinating comparison. I was excited to grow ulluco because of its unworldly colours, they look like sweets! Mandy Barber of Incredible Vegetables has done a great job of popularising and making Ullucus tuberosus available. Ulluco is in the Basellaceae family, related to Basella alba (Ceylon or Malabar spinach) and Anredera cordifolia (Madeira Vine).

However as Mandy writes, it’s not easy to grow productively. It bulks up very late and I harvested as late as I dared, before the hard frost. I was gutted to find only 0.77kg of very small tubers, none larger than marbles, from eight sprawling plants.

Then I harvested a similar area of Boltardy beetroot sown 13th June, planted after cauliflower, and there were 21kg (46lb) beetroot! From a second crop. I recommend you keep a few yield figures to see which vegetables are most worthwhile, for a hearty meal at least. Those beetroot will keep all winter in my shed and are as delicious in salads as cooked.

I roasted some for 45min at 200C, in the same tray as some parsnip, yacon and par-boiled potatoes. Both Steph and I found the ulluco lacking in flavour, just soft and juicy with a firm skin, and pretty colours.

In contrast the yacon were incredibly sweet, even a little sickly, tender and inviting one to eat more. The potatoes (Charlotte) were delicious as ever and filling, while our favourite was the Gladiator parsnip, full of sweet flavour and with a dense, creamy texture.

Here is another comparison. Like ulluco and yacon, oca needs a whole season to grow, and harvests late. From the same area as the beetroot and ulluco, my six plants gave 2.2kg (nearly 5lb), and the tubers are now on a sunny windowsill to sweeten.

We had 71mm (nearly 3in) rain in two and a half days, a great opportunity to check the drainage of beds and paths. I was fascinated to discover water lying on the grassy area around some of my garden, but not anywhere on the beds or paths, except where some extra water drained off the compost bay.

Compost/organic matter on undisturbed soil is best for drainage! I receive many comments along these lines from no dig allotmenteers, who notice the dug and rotovated plots underwater in wet weather, while theirs are not. Less work, better result, what not to like.

A last word for the old foe. Even when there appear to be few around, it’s not worth tempting them. They love chomping on decaying leaves, so collect and remove to compost all yellow and fallen leaves of Brussels, kale, broccoli, spinach and salads. This keeps the slug population lower and gives more chance to your spring sowings.

Gardening success comes from acting and thinking ahead.

9 thoughts on “Dec. 2016 winter veg, harvests, no dig success and starting out”