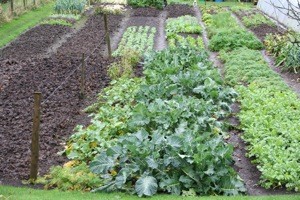 What! you ask, do gardeners actually go out to their plots in December?
Having looked around some local allotment sites at this time of year, I am afraid the answer may be ‘a lot do not’. But these people are missing out!

Partly it depends on how your plot is currently set up. If you have beds and pathways, access is possible at all times and weeds can be pulled, compost spread and so forth. Even in December there are weeds that can set seed such as bittercress and groundsel, so it pays to keep things clean.

The easiest way to keep on top of weeds is to pull them small, perennials included. If you have been doing that throughout the year, soil should be beautifully clean now. But if you have inherited or have been allowing to build up a lot of perennial weeds and roots, some long term mulching would be worthwhile.
Having a good understanding of the potential of weeds to disrupt vegetable growth, and ways of controlling and then almost eradicating their growth, makes vegetable growing much more enjoyable.

Many gardeners are now finding that no dig is a fantastic method for diminishing weed growth. If it is too wet to go outside, do some reading on this site for ideas on creating a no dig area – I have just posted an interesting and fair comparison of digging and not digging by Val Bourne, who gardens in the Cotswolds and wrote a feature for Grow It! magazine, December 2009 (see Articles).

One of Val’s objections to my system of no dig is the large amount of compost needed. Her calculation of thirteen cubic metres for a 10 pole allotment assumes that compost is spread on pathways too. In fact, once an intially heavy dose has been applied, one normally covers only about two thirds of the total area (the beds) with a two inch cover – some of which does end up in pathways if it rolls off or is kicked off by birds.

Last spring I helped to mulch an allotment with compost and manure for the first time, spreading four tons of green waste compost and about one ton of well rotted cow manure. Crops this year have been superb. As they finish, Steph the allotmenteer is spreading more compost and cow manure at about half the rate we applied initially, since fertility has now been given such a substantial lift.

These amounts of compost and manure are, in a historical sense, not large at all. Before the prevalence of internal combustion engines, there used to be a lot of horse manure available for gardens, but it is harder work to spread than fertiliser granules, so people have been forgetting about using it, and the advantages which accrue, including resistance to disease and moisture retention in the soil.

November has been the wettest month here since October 1976, so it is a good opportunity to assess drainage through my undug clay soil. I am delighted that water is passing through extremely well, much better than through the ploughed field above, whence I am receiving lots of little streams through my gardens.

Parsnips are coming out well and the soil around the bottoms of their twelve inch roots is reasonably aerated and not lying wet, all very different to how it was nine years ago when I first gardened in that part of the field.
Other harvests here in December include leeks, celeriac, turnips, swedes, beetroot, red cabbage, carrots, bulb fennel, chinese cabbage and a surprising number of outdoor salad leaves, all helped by the absence to date of any proper frost. Salad in particular has grown noticeably better than usual through November, although I expect less growth and less quality of leaf as daylight now hits its lowest levels, at the same time as temperatures falling closer to average.

The last bed of carrots provided an interesting comparison of some growing in the open and some protected by mesh, held down by stones around the bed. I was keen to see how much difference there was in damage by carrot root fly, and the meshed carrots were certainly cleaner, but still with some notable damage, as well as quite a few slug holes. The mesh was worthwhile but my results are a reminder that growing perfect carrots is not easy, unless perhaps you have a free draining, sandy soil.

Celeriac on the other hand have swollen to a good size, and they clearly do appreciate a heavy, moisture retentive soil. Many gardeners ask why they cannot grow large roots of celeriac and it always turns out, when I enquire about their soil, that they have a light loam or free draining, gravelly soil – bettter for carrots in fact.

Salad on sale at:
Spar, The Organic Shop, The Olive Bowl and Churchbridge Stores, all in Bruton
Oates and Musson and Lush, both in Castle Cary

And on menus at:
The Montague Inn, Shepton Montague
The Chapel, Bruton
Oates and Musson, Castle Cary
Pilgrims Rest, Lovington

Grow garlic, an easy crop with no dig, hard or softneck, tips for harvest