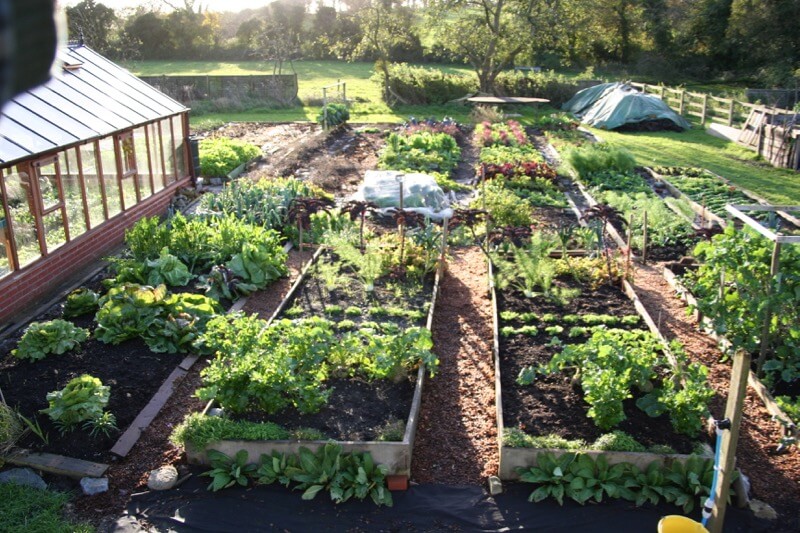 Winter has arrived but November was mostly mild until recently. I picked raspberries of good flavour on 21st, and we spread biodynamic preparation 500 on the same day, to enliven soil with good energies over winter.

From two beds covered in mesh since early August, carrots had no root fly. But there was a little slug damage and I feel safer to have the roots in boxes of sacks in the shed. Just with a little soil on as you see in the photos, I do not pack in sand or whatever, more on storing for winter in this video

On 27th-28th November and before the current frosts (-4C/25F here + breeze, so effectively colder), we brought in lovely harvests of beetroot, carrots, celery, fennel, red cabbage, Chinese cabbage hearts, chicory, kohlrabi and celeriac. Some of these are frost hardy but there is also the question of slugs and rodents eating outdoor crops.

Storing with roots on, or not

We pulled chicories and red cabbage out of the ground to leave the main rootball on, then I packed the harvests into crates lined with polythene, currently outside and in a less frosty place than mid-garden. I shall compare how the cabbage store with roots, to those in the shed without roots.

Steph and I felt happy to have run three full weekends consecutively during November. Always the participants are so interesting and from such varied backgrounds. Next year’s course dates are here, scroll down halfway, click on a date to purchase.

On the last course day I harvested oca and yacon, the photo below shows yields from one plant of each!

Unlike my Diary which is perennial, this is for one year 2018, with my best dates for next year’s sowings. Not every possible sowing date, but the first or main ones.

For northern UK best add a week to the dates in spring, then sow a little earlier from July into autumn. For gardeners in N America, my zone is 8b.

Signed copies of the calendar are available here, and the double book offer of signed and dedicated books continues until 22nd December.

Steph and I attended 2017’s ‘gardening Oscars’ at the Savoy Hotel. Permanent Publishing had entered our joint book and wow, we won  – a link with details of the awards, see Tanya Anderson’s video here. What a great feeling in front of 300 people.

My work was well represented: I had entered three categories and was shortlisted in all of them. The Diary in Practical Book (won by us!). I am having another 3000 Diaries printed.

Articles for Country Smallholding magazine in Practical Journalist (won by A. Titchmarsh)

A video in TV Broadcast of the Year. Being one of three finalists in the TV category, alongside two BBC programmes, was especially exciting.

Compost is not “fertiliser”

I have used the method of autumn mulching with compost on soils ranging from stony brash to dense clay, since 1983. There is always strong new growth in my gardens even 10-12 months after spreading the compost. I add nothing in summer and use no feeds.

Even on sandy soils well known for being hungry, when the compost is well decomposed with nutrients held in complex, aggregated forms, nutrients cannot wash out of the compost. As opposed to the simple, water soluble NPK of synthetic fertiliser, whose over-use causes most of the leaching problems in waterways, and influences discussions such as this.

More importantly, compost is not all about nutrients. When I started growing in 1982 I faced the comments of chemical farmers who were unimpressed that my compost was “only 2-1-1 NPK”, or whatever the official figure was. However these numbers ignore compost’s ability to stimulate soil organisms and long term, healthy growth.

I have four mushroom boxes cropping again, in the unheated greenhouse. This winter for a change, two boxes are filled with non organic compost, two with West Riding organic compost, and I am interested to see any difference. So far the organic leaves are smaller and darker, the first harvest was 145g organic and 240g non organic. Over the winter this will probably balance out, we shall see.

I am doing this trial just to see, and am not advocating to use non organic compost because I believe that organic compost gives healthier growth over a long period. I want to know more about how chemical compost compares.

There are many interesting comments to this new video, including this from Vera Greutink who has her own channel Growntocook:

Kale is a staple in our Dutch winter garden, too (and in the Dutch winter cuisine :-)), borecole being the most popular variety here. This year, apart from the prolific and very hardy Olympic Red, I am growing a purple variety of borecole – in my experience pigeons seem less interested in purple coloured kale varieties.

No dig is being widely adopted, and I am thrilled that it’s included in Wisley RHS new Edibles Garden, opening 2019. Also the Wisley student allotments are now 50% no dig on each plot, to compare growth with dug and rotovated soil.

Several National Trust gardens, particularly those growing vegetables, are no dig or moving towards it. At Mottisfont Abbey the gardeners are delighted to observe how mulching has reduced the oxalis problem, so much more easily than the annual dig or double dig. We heard how while it was being laid, visitors enjoyed discussing the cardboard mulch!

Sissinghurst no dig kitchen garden under Helen Silver has given steady harvests and large savings on 3/4 acre, since 2015. Kew Gardens’ kitchen garden is no dig since 2016, and Vicky Cooke is growing great no dig veg at Hampton Court garden by the river Thames.