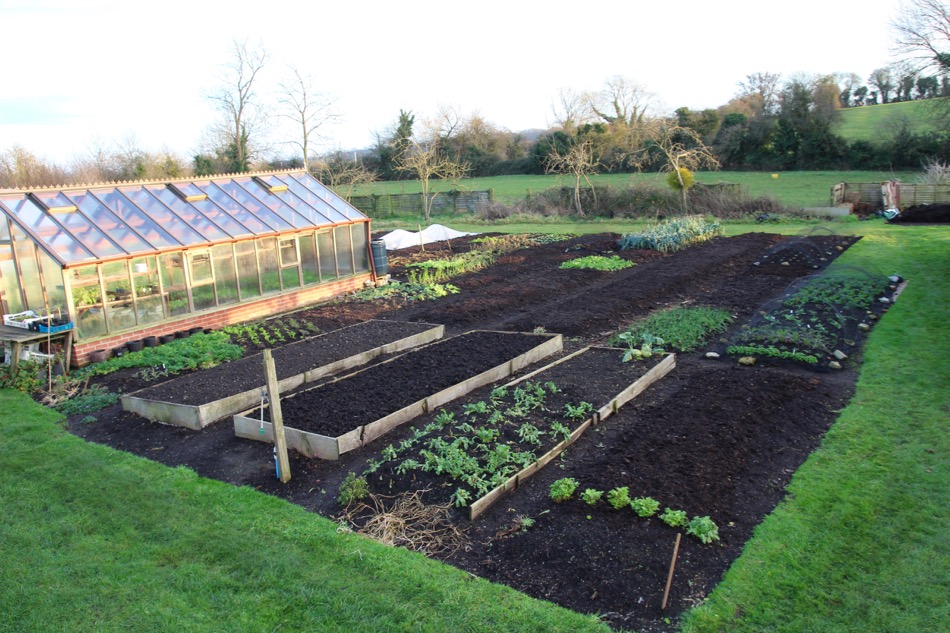 It has been mild here, after a freezing first four days when we had two nights of -6.5C (20F). That was cold enough to freeze plants in the polytunnel and greenhouse, and to damage older salad plants outside, but newer plantings outdoors have survived well, see below.

The frost was good for softening lumps of surface compost, and for sweetening the flavour of parsnips and Brussels sprouts. Steph and I love them at this time of year, and homegrown ones taste quite different to most bought (non-organic) ones.

Then I spread compost on the undug bed, which took ten minutes, and dug the other bed while spreading the same amount of compost in each trench. That took eighty minutes, so a big time saving with no dig, followed by more time saved next summer, from less weeds germinating.

Compost is my preferred mulch to feed and protect soil, without harbouring slugs. In drier climates and soils, you can use less-decomposed mulches.

Thanks to help from Felix and Mick, my compost is of lovely quality. One batch is dark brown rather than black, which suggests good aeration and less saturation with moisture. I pick out any larger woody pieces while filling the barrow, and spread them on paths.

The whole garden is weed free, thanks to occasional pulling of small weeds and the no dig method. Weeds germinate less in a  fungus-rich surface. So it’s an easy garden to keep in pristine condition, ready for new sowings and plantings at any time.

Link to podcast with Sean and my interview commences at 12m 25s.

After the climbing beans finished, I planted spinach, salad rocket, winter purslane and lambs lettuce in late September. Each bed of the three that comprise this strip has different treatment and the first bed was forked in May before planting the beans, the soil loosened without being turned. It had the same mushroom compost, surface applied, as the second bed no dig, while the third bed is no dig and has decomposed cow manure.

We made a video on this trial here.

During the frost, many winter vegetables looked sad and wilting.

Then it’s a wonderful transformation as they thaw out. My spring onions are almost ‘too big’ in that, if there is a -10C in February, their larger size makes them a little vulnerable. Smaller plants survive better in deep cold, see beans below.

If you followed my advice to sow mid November, in southern UK, and early November in the north, you should have some small or very small plants. Small is good. Invisibly to us, they are rooting strongly into the warmer soil below, and it’s the same with garlic.

We sowed some broad beans outside, and some in the greenhouse, planted 14th December. The net is to keep rabbits and birds off, but there may still be rodent damage.

Most of Homeacres leaves from now until April come from plants undercover. Grenoble Red lettuce were sown 5th September, most of the other salads were sown 20th September, and we planted them all in mid October after clearing tomatoes, basil etc.

Steph helps picking every week, then in January we have a pause, depending how cold it is. I water every two or three weeks.

We have been handling large orders for the diary, from website purchasers, Amazon, four destinations in Ireland and a book wholesaler. I hope to find a distributor in the USA and a reprint is scheduled for the new year.

Thanks to all my customers and I hope the book helps you gain more successes next year, for less effort.

You can still order here for delivery by Christmas (in the UK), until 20th December. We continue to despatch after that and the book will have more surges in sales as the new gardening year approaches.

Finally, a little late, we found time to stir and spread some horn manure preparation (bd 500). I feel it helps to enliven soil and plants, though I cannot prove that.

Always, spreading the preparation feels like making a good connection with soil and plants.

It’s time to clear the dying top growth, weed the area and spread some compost.

Last year I cleared and composted all the stems, this year to save time I am leaving them on the path between my two asparagus beds.

The asparagus grows tall and it has worked well, in part of a bed next to it, to grow Brussels sprouts.