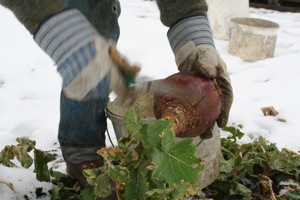 After a cold January, it looks like being a cold February. The lowest temperature so far was -15C on 7th January and the month’s mean temperature of 1.2C makes it the coldest January for 31 years. Not massively cold, but quite a change from the mildness of recent decades.

The results of four weeks cold weather (Dec 16-Jan 14, almost exactly new moon to new moon) have been revealing, mostly for showing how sturdy many of our common vegetables are. Still available to harvest outdoors (here in Somerset) are swede, savoy cabbage, kale, brussels sprouts, parsnip, leeks of the shorter stemmed Musselburgh type and some gorgeous lambs lettuce. The main suffering has happened to less hardy varieties such as Jagallo Nero kale and Autumn Giant leeks.

Now however, daylight is increasing steadily and there are occasional hints of spring coming through this month, especially if you have a greenhouse or suitable indoor space for sowing the first seeds. Only broad beans can be sown outdoors in February, but there is lots to set going undercover.

All of these vegetables are frost hardy so will not be killed by any freezing nights in a polytunnel or greenhouse. On a windowsill in the house they will germinate even more quickly, but will also become long stemmed (leggy) quite quickly and need, before that becomes acute, to be moved into full light. This happened to me with a December sowing of sweet peas, which developed long, straggly stems indoors, so I potted them on deeply in larger pots in late January, to shorten the stem above ground.

All of the above vegetables can be sown in modules filled with multipurpose compost, at different sowing rates. I put in one or two beans, two or three peas, five to seven onions and spring onions, two shallot, four beetroot,  two cabbage, cauliflower and lettuce, and three or four spinach and parsley. The idea being to have as many plants as is viable to grow in one clump.

Then once germinated, I thin some of these modules if over-sown, also beetroot which often germinates more than one seedling per seed. Lettuce and cabbage are thinned to one plant per module because they grow best as individual plants.

Another way of sowing is to scatter a few seeds in seed trays, then prick out into modules once they have just two leaves. Be careful in all sowing to spread only a little compost on top of seeds: germination is more commonly hampered by sowing too deep than too shallow. Also be sure to sow into throughly moist compost, so that no further watering is needed for up to a week while seeds are germinating. Then give water sparingly to germinating seedlings, they need very little when young. Seeds and seedlings suffer more from excess moisture than from too little.

All of the above sowing numbers should result (apart from lettuce and brassicas) in clumps of plants which can be set out in late March and April without any thinning. They grow nicely in groups, for instance of four or five beetroot.

In the case of beetroot, when clumps of plants are nearly full grown in June, there is always one root that is larger than the others: it can be twisted out and the remaining roots left to carry on growing, until a week or two later you can twist out another root of fair size, and so on. Bulb onions grow similarly and can be harvested in the same way, or may be all pulled all at the same time for drying off.

Peas grow well in clumps of two or three and when growing them for shoots I space them about a foot apart, often planted under fleece around mid March. By mid April they should be tall enough for you to pinch off the top two or three inches of stem, a delicious treat for salads with a summer-like taste of pea. The plant looks moribund after doing this first picking but a week or so later it will send out more shoots from lower down, giving many harvests during a period of up to two months.

That is all in the future, now is time to begin. I have a propagating bench in the greenhouse, nine inches of damp sand with electric cables and a thermostat set at 16C for now, rising to 20C in March. The idea is to achieve a steady germination, with all heat rising evenly through seedlings’ roots before providing a little background warmth in the greenhouse. Few plants are on the heat for more than three or four weeks, before being moved to an unheated part of the greenhouse or polytunnel.

Tomatoes, aubergines, peppers and chillies can also be sown in February although I prefer early March – and at that date they still need some extra heat to make them germinate and grow. Whichever date you choose, be sure that you will have enough space undercover to accommodate all the plants in April and May, when they are much bigger and still need frost protection.

Outdoors, if you managed to spread some compost or manure on top of soil in autumn and early winter, any dry spells in February are good for knocking it around with a rake or manure fork, to break up any larger lumps. Also remove any weeds you see, so that you are moving towards having a nice crumbly seed bed.
Compost can be spread now, or soil may be left bare and composted later, once plants are established. Sometimes I sow parsnips in un-composted soil and then spread some as a mulch between the rows, when the plants are about six inches high. Other vegetables that respond well to a summer mulch of compost are celeriac, leeks, brassicas – and autumn salads which can be planted into soil with a thin mulch of fresh compost.
Any extremely weedy soil is best either mulched thoroughly, as soon as possible, for planting in May and June, or dug over as a one off for earlier sowing and planting.

I have been doing lots of hedging in January and there is still more to do. Any tall hedges near to a plot will keep light and take moisture from its vegetables, so it is worth keeping hedges small, also cutting down any trees that are too close, as long as they don’t belong to the neighbour!

Vegetables (not neighbours) are quite fussy and we need all conditions to be as near perfect as possible if we are to harvest good crops. Use the winter months to get these basics right – rich soil, no competition from nearby plants, and clear edges to give less habitat for slugs.