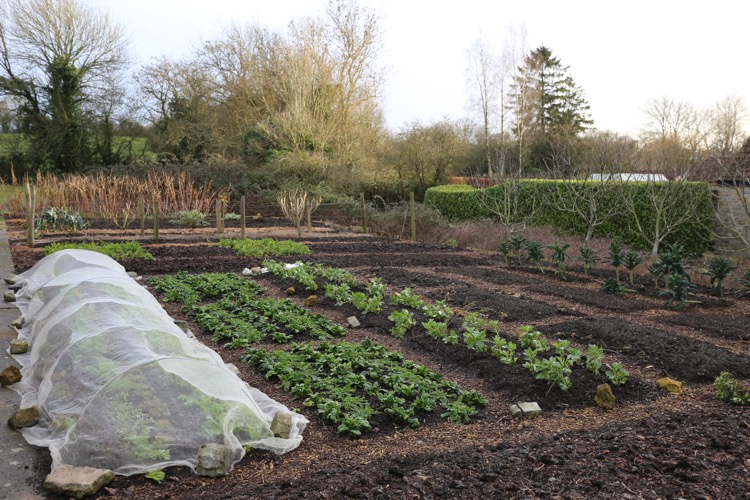 Be careful of sowing too early, there is no rush in spring because later sowings often catch up as it warms and lightens. For example I plan to sow tomatoes on 18th March this year.

In the next two weeks and undercover only (windowsills, greenhouse etc) you can sow broad/fava beans, lettuce, spinach, cabbages which are early hearting varieties (read the small print), calabrese, onions and spring onions, radish, coriander, dill, parsley and peas for shoots. All of these grow in cool conditions and are not killed by frost. I shall sow Boltardy beetroot towards the end of the month, and peas for pods. All of these can also be sown in March, this page tells you which are suitable to multisow.

I had this question and it highlights an important point:

Do you sow your seeds directly into the compost you make for your beds or do you buy/make something separate for your seeds?

The answer is yes, seeds love germinating in compost, why would they not. The important point is that this person had believed somebody, warning him not to sow seeds in compost.

Just don’t believe everything you read or are told, as in life generally. And especially in gardening where there are so many ‘experts’! Trust your common sense.

More of the same

I see this comment too, that “caffeine in coffee is harmful to plants”. Well, the best place for coffee grounds is in a compost heap, because coffee is very raw and undecomposed, only it happens to be brown and of fine texture. If there were much caffeine, it will decompose.

My compost heaps are about 5% coffee at this time of year when there is less green matter. Kitchen waste, wood ash, a few weeds and vegetable trimmings. And there are rats which do not cause a nuisance here, rather they mix and aerate the heap.

We had around 15cm/6in snow on 1st and 2nd February, with temperatures close to freezing so some of it melted while falling. Before the snow melted, we had one night of -7C/19F and the snow protected beetroots which otherwise might have been damaged.

My online course about no dig has proved a huge task: it’s now nearing completion and available within a month. The price will be around £150 which includes VAT. There are 24 new videos, new and not available on You Tube, 50,000 words and hundreds of photos.

There are quizzes too, which aren’t designed to catch you out! Just a way of checking your understanding and to help digest your learning. You’ll receive a Charles Dowding no dig certificate on passing the final quiz.

Day courses here continue to sell out and the next one with places is 20th March, then 6th April and 7th too.

My talks season has begun and the first one at Wrington had a sold out audience of 130, with a lovely atmosphere. Having a lot of gardeners together definitely increases the happiness quotient. See what’s coming up here, including a talk in Nottingham 2nd March and the conference in Norway mid March.

No dig at Kew Gardens, London

At a recent event I caught up with Helena Dove who runs the vegetable/kitchen garden at Kew, all no dig. She has some lovely compost to mulch with and the beds are beautifully maintained, worth a visit if you are nearby.

All the Kew students are learning no dig: each has a bed to grow vegetables, and these used to be dug. This is year one of no dig for them.

No dig and few weeds

It has been mild enough this winter for some weeds to germinate even, as well as grow some more. The beauty of no dig is how little this happens and I have barely weeded the beds or paths anywhere. Nonetheless if I see weeds, I pull them. For no dig basics and growing information too, check our double pack offer.

For your diary – Homeacres is open on 19th May.

Animals and birds are getting hungrier and here, unusually, I have pigeons eating brassica leaves. The broccoli and kale are my main priorities for covering, whereas swede/rutabaga and kohlrabi are barely growing so I let the pigeons prune their leaves.

There are still no rabbits at the moment, following the fever which they succumbed to last August. I have seen one or two though.

In the UK we are surrounded by ocean which is warmed by the gulf stream. This February we had snow but with temperatures no lower than -7C 19F, then three days later there was hazy sun and 10.5C/51F.

That was a great day for showing visitors the great results of no dig, a group from the International Federation of Organic Agriculture Movements.

They were from all continents, and how can one categorise the range of climates experienced by just these few people? At school I learnt the Koppen system, easy to understand, and we are temperate. The USA has adopted a more precise system, USDA’s zonal classification and it has been matched by the RHS, for use in the UK. In this one, Aberdeen and London are in the same zone (9a) which seems strange. Somerset is zone 8b but never that hot in summer (daytime is 22C/72F) and with last frosts early May, first frosts late October.

I look forward to checking the Swedish climate and lovely long days in the last week of June, at Ridgedale Farm. Richard Perkins and I are running a 4 day course in market/no dig gardening from June 25th to 28th. Then I give a one day course on Saturday 29th, also at his farm, which is 3 hours from both Oslo and Stockholm, and Gothenburg too.

49 thoughts on “February 2019 a few sowings, compost and mulching, courses, snow and pigeons”