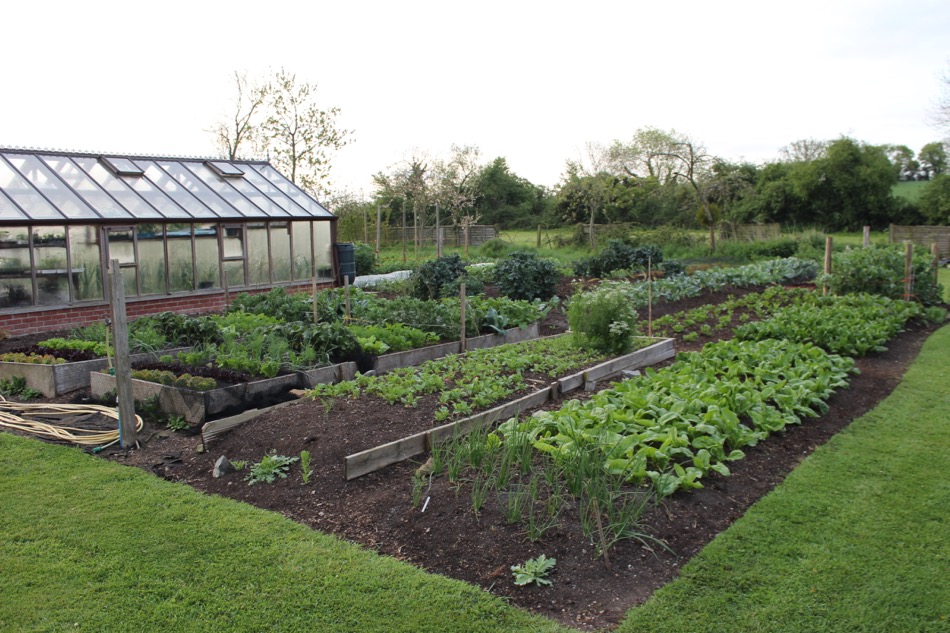 Hooray let’s go. Undercover to start with, because outside it’s still vegetable winter, see the amazing differences between spring, summer and winter. I make no outdoor sowings before mid March, except for broad (fava) beans.

It’s time to begin, or for colder parts of the UK, in about ten days time. Extra warmth for seed germination is highly worthwhile, including windowsills in the house, at least for the week or so until seedlings show legs.

At Homeacres we assemble a heap (hotbed) of fresh horse manure, to provide heat for new sowings. See March 2016 for details of that. This year two of us fetched the manure and built it in three hours today 14th. 18 hours later the heap temperature is 30C, soon it should be 60C and warming seed trays to 20-25C.

See my Diary and timeline for more on what you can sow now, and what not to sow now . Stagger your sowings throughout spring, according to the best time for each vegetable. Then through summer and into autumn, for succession, to keep the plot full, with harvests potentially all year round.

Composts change every year, and vary from batch to batch. Yet over the last 20 years I have had consistent, good results from West Riding Organic compost, at around £6 for a pallet of 60 x 40l sacks, or £12 retail for one sack. Their compost is half recycled peat, half green waste, see next section.

This page on Quickcrop has some good composts, and I think that the Klaasman seed compost is based on green waste. I have used it and had good results, but would be happy to try worm compost as that has always grown good plants. Those prices are high though (good discussion on that in this topic) and the best budget deal, not organic, is probably Melcourt peat free, and B&Q.

Do you need one compost for seed, another for potting? I suspect this is a myth: an experienced gardening friend reinforced this by sowing a large number of seeds into Levington’s No.3 at Christmas, just to see. No. 3 is the compost with the most nutrients, recommended only for potting. Yet all seedlings came up nearly 100% and have grown strongly, under the LED grow lights that Allan was also trialling (they work!).

In the two photos here, I used some of my own compost. It’s a little lumpy, which helps maintain air for the roots.

These persistent, horrible poisons are sometimes in grass from lawns (clopyralid) and sometimes from horse manure if the hay was weed-killed with aminopyralid. There was a discussion about this on the excellent Facebook group Undug. See the ghastly effects below – curling of new leaves, lack of chlorophyll, stunted growth.

Occasionally green waste compost is tainted, even potting composts. I asked West Riding, who use half green waste as well as the peat sieved out of reservoirs, this was their reply:

“We source our green waste from a small independent firm who only compost the tree cuttings/chips that they produce. As there are no grass cuttings composted, as well as testing for clopyralid, means they are as sure as they can be that nothing is present in the green waste.” Melcourt’s compost is also based on their own composts of wood.

On a brighter note,

Edward filmed here in early February, mostly in my brick lean-to where the root vegetables and cabbage are stored for winter. We also went in the conservatory and filmed some vegetables that keep well in the house. See the  video here.

This subject also has a new video, filmed in late December after some hard frosts. The salad plants and spinach are all still surviving and starting to grow again, slowly.

On a different bed of spinach, we took the net off and covered plants with fleece, to speed new growth in the lighter days. See the result of doing this in March 2016.

I put up the photo of last summer to show how we planted the savoy cabbage, between lettuce which we were still harvesting in July. Interplanting is easy with no dig.

Growth is starting to be more vigorous as leaves use the increasing light to grow thicker, larger and glossier. We love harvesting in late winter and spring, each week is a mini revelation. See Steph’s blog for examples.

No dig with compost mulch means that growth is generally healthy, and there are almost no weeds. We tweak any weed seedlings while picking, it’s a pleasure when there are so few.

I have been watering every three weeks through winter, soon it will be every week. I wait until the surface looks dry: this reduces slug and mildew damage.

With no dig it’s easy. Time needed depends on your weed situation: if you have a mass of weeds, more than can be cleared by hand, check this video for ideas.

Otherwise, some hand weeding to remove every small weed is important, then spread 1-2in (3-5cm) compost on the surface. Or less if you cannot source much, though vegetables do love rich soil.

Many of us have spread compost already and any frosts have helped to soften it. Best wait until March for initial weed strikes with rake and hoe.

I have always sown parsnips direct into surface compost, finding they come up so quickly. Best time to sow outside is mid to late March, and a fleece cover helps germination.

“Having saved many loo roll tubes, I filled a seed tray with them and sowed 4-6 parsnip seeds into each, a day or two after full moon, germinated them indoors to get as uniform a germination time as possible (it was quick too), then transferred to the greenhouse and monitored carefully for the very first signs of any little white roots out of the bottom.  The moment I saw any roots, the whole lot went out into the heavily mulched bed over clay and I fleeced them over, must have been late March I think.  The photo shows one clump of them just pulled – only one forked at approx. the length of the loo roll and they didn’t wind themselves around each other.”

Charles Dowding is renowned for his no-dig approach to growing and the benefits it brings in saving money, less weeding, plant health and harvests for all seasons. Although this spiral bound book is a ‘diary’ of sorts, this only tells half the story as it is also packed with tips, guidance and nuggets of gardening wisdom on various aspects of growing fruit and veg. From care of the soil to making compost to how to manage individual plants, this book is structured chronologically month by month, as you would expect. However, it starts with March – one of the busiest months in the gardening year – and ends in February. Each month has a page for notes in diary format, so you can add your own notes as an aide memoire perhaps to look back on in subsequent years. The diary pages are interspersed with well-illustrated pages of practical advice. Definitely one to have by your side as the growing year unfolds.

WHO IS IT FOR? All gardeners looking to get the best out of their crops.

Feedback from Ewa in northern Poland

“it seems likely that farming, food safety and animal welfare will be sacrificed in a rush to the unregulated bottom that is World Trade Organization rules. Perhaps we could compete on world markets if farmers were free to bulldoze hedges, fell trees, pollute waterways and abuse their livestock.

However our island is too small and there are too many other stakeholders who want a say in how our food is produced and countryside managed. Welcome to an uncertain world in which we need to keep our eyes firmly on ensuring a decent food supply for all.”

Conclusion: grow as much as you can!

However, I received this from Lynn Formison

“My husbands favourite saying: if it was easy to grow vegetables everybody would do it!”

Now there is a challenge.