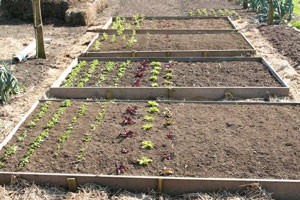 December’s blog explained the background to my dig/no dig experiment and gave the results of all harvests in 2007. Soon after posting that, I finished the year’s harvesting off all four experimental beds, and the summarised results for the whole calendar year of 2008 are set out below.

It was another wet year, with over 1400mm (56”) of rain and the raised beds never dried out. Temperatures were about average (year’s mean just below 10C), while sunshine was well below average. These conditions favoured winter crops such as parsnips, leeks, cabbage and celeriac more than summer vegetables such as french beans. Onions were affected by mildew but no other diseases were prevalent and I just about kept on top of the slug population, by having no weeds and with some night patrols in the summer.

Please see the tables below for the Dig vs. No-dig growth differences.

Summarising the growth differences, it was noticeable again that early spring growth of all plants was stronger on the undug beds, such that by early August they had yielded 24kg of leaves, roots and fruits compared to 21kg from the two dug beds. Meanwhile, the red cabbages were again growing more strongly on the dug beds, where soil had supposedly been ‘opened’ by digging. An intriguing refutation of the maxim that cabbages like firm soil. Or perhaps the undug soil is, in fact, better aerated by worms and undisturbed soil life.

Parsnips provided a fascinating comparison. The dug bed’s heavier crop was slightly offset by its poorer quality, with more canker and root branching. Both beds’ parsnips were prised up with a fork and the undug bed’s roots came out markedly cleaner, taking less time to make presentable. Notice in the photo how the dug parsnips are smeared with mud, indicating a soil with too little structure, unable to aggregate in colloidal lumps.

I was also intrigued by the difference in late salad growth, with both lambs lettuce and land cress growing darker and more strongly on the undug bed. Maybe this late growth potential is why leeks again came out heavier on the dug bed. Still plenty of questions!

I am running this experiment because I really want to understand the differences caused by soil cultivation and inversion, and I hope the results and photographs are helping you also, to understand how best to treat soil.

Bed 2 was dug on 28th November, its clay rather sticky and I worked off a board, incorporating one large wheelbarrow of 70% homemade compost, and 30% mushroom compost in the trenches. Bed 1 received a barrowload of the same compost on its surface, which took about an hour and a half less time, and made less mess!

Bed 4 was dug on 25th November when I incorporated one large barrow of well rotted horse manure and spread the same amount of manure
on top of bed 3.