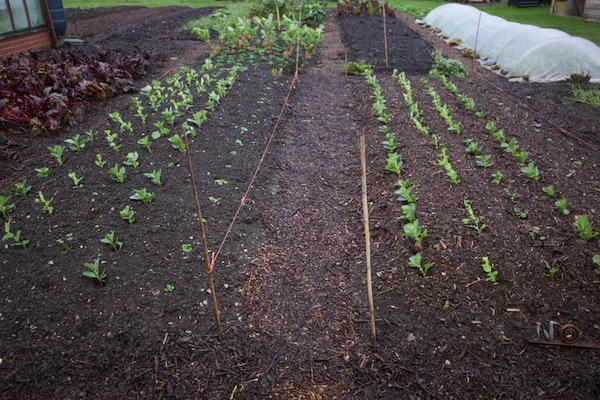 No dig gardening and farming are easier because soil can “soak up” the extremes of weather. For example by draining freely, as in the German floods of July this year, and by holding moisture,  and growing fewer weeds for larger harvests. Growth has been good here in the variable weather of 2021, as in every year preceding.

The weather here has been a whole degree cooler than last year, which was very warm. The cold spring made quite a difference, but then we had a pleasant summer and rainfall has been consistently average. We receive about 70 mm monthly or just under 3 inches: see all about the weather at Homeacres on my weather station pages, (they need manual refreshing).

Now in winter, we have top dressed all beds with 2.5 cm/1 inch (measured after it settles, say following rain) of 6-10 month old compost of any origin, often not perfect and we never sieve it. Any lumps are broken by occasional frosts, then we rake off any larger bits of wood into the pathways, which also receive a dressing of woodchip. I like to keep heaps of woodchip for up to a year before spreading them on the paths, so that their goodness is more accessible to soil organisms.

No dig is such a win-win, see my latest new area video, and one of its best attributes for me is the quality of food we harvest. I used a little oil and no salt for the dish of roast vegetables below. Not that I’m against adding condiments but when the base flavours are so strong, often it’s a shame to add other ones.

Another aspect of no dig which I love is the ease of maintaining fertility. For example the Brussels below are a second harvest of the year, after carrots, and with nothing added to the soil since the previous December. I never use any feeds or fertilisers, which makes gardening so much easier. We can just rely on soil life!

Learn more about the ease and benefits of this way of growing with my online courses, which are half price until 31st December with coupon #nodigforlife. Last week I received this feedback, from a gardener in Pennsylvania USA:

“I took one of your courses last winter, and received much appreciated advice from you on planting times in New England. It was a remarkable summer in my vegetable garden, much more productive than I had ever managed” Violetta Faulkner.

I shall be explaining more about no dig and health at a virtual conference in the middle of January, the Health Freedom Revolution summit, where I am speaking on Sunday 16th January at 11:15 am.

I started this trial at my former garden in 2007, so this is the 14th successive year of comparing growth in adjacent beds where we apply the same amount of compost, and set out the same plants or seeds. The only difference is that the soil in one bed has been dug and its compost placed 15 to 20 cm down, while the adjacent bed has the same amount of compost simply placed on top. See the results below.

One difference this winter is I decided to grow something, between now and when we do first plantings in the middle of March. At that point we shall cut off the broad bean & pea stems to leave their roots in the ground and harvest everything else, to start with clear soil in spring.

It will be interesting to compare the plantings through winter – see this video to compare growth of other late plantings from the autumn. So far in these beds, there is a little more growth in the dig bed, probably because of bacterial oxidation resulting in nutrient release. Also I am sure that the digging will have caused some carbon to oxidise, and I’m still waiting for figures about the carbon content of each bed from Jane the scientist.

The tables give you an idea of how intensively these beds are cropped, more details on this page, and maximum cropping for less effort is one subject of my new Skills for Growing book It’s also available with many videos as the Skills for Growing online course, half price until 31st December with coupon #nodigforlife. We have a few advance copies of the book at Homeacres, and have sold 700 already. In North America, order from Chelsea Green Publishing.

My desire in writing Skills is to help gardeners achieve better results for the same amount of effort and from the same amount of ground. Make all your time and space count, even double. It’s easier than you think once you understand how to do it and the no dig bed of just 1.5 x 5m / 5 x 16ft gives 100kg+ / 220lb every year, of trimmed and kitchen ready vegetables.

My son Jack, who runs a contracting business with, wait for it, diggers and tractors, is free in early January so he will be digging the new pond then. Meanwhile, Adam dug a hole and it’s fascinating to see the profile of soil, down to below a metre.

The hole had no water in, then by the following day it did have some and now the water level/water table is only 60cm / 2ft below the soil surface. Jack is confident that we can have a decent amount of water for most of the year, and has some plans about making that more certain.

Chervil and claytonia for winter harvests outside

In the temperatures we’re having, these continue to grow impressively outside. I took a big harvest just before Christmas and there will be more to come.

I’ve also been noticing how the Claytonia attracts bees because its flat leaves hold  droplets of water which they can drink from, on days when the temperature is 12-13C or more. Not often!

A big subject but these are two descriptions of pretty much the same thing. I feel that cover cropping is the more accurate term because there is not a huge addition of “manure” to the soil, over the short time period we use them between vegetable plantings. However these plants do a valuable job of covering the soil surface and adding biology + carbon, through root growth.

From the time we take a final harvest in November-December, until we replant in March, I like to leave beds empty of cover crops but covered with compost or woodchip. The soil is covered, but not growing any leaves which harbour slugs, and also it’s then very quick to sow or transplant in March, with often a success rate of 99%, thanks to the surface being so perfect for new seedlings. In the case of the broad beans here, we shall cut them off at root level at whatever point we need to, once asparagus looks strong. Maybe leave a few for pod harvest. There will be addition of nitrogen nodules and organic matter, both valuable.

I was given some wool in June and we spread it on the surface of an area before transplanting brassicas, on summer solstice day. They grew very well, then six months later we twisted out the cabbage, kale and Brussels sprouts stems, lifted the black polythene (was to prevent bindweed) and spread compost on top of the wool. It’s early to say how much the wool is improving soil but it looks promising and a lot has decomposed already.

The middle photo below is 27th of August, and in the middle section of it you can see broccoli plus leeks, which we transplanted after the potato harvest. Learn more about that in my new video, filmed in July this year.

It’s my enormous pleasure to tell you about a new CSA starting in South Dorset, close to Ringwood and Bournemouth, the initiative of Kate Forrester and her stepsister Mollie. Kate started working here in September 2019, at which time she was working as a chef. Her desire is to match creating meals with growing healthy food, and then teaching people about those two. Molly meanwhile has worked as a ranger and is hugely knowledgeable about wildlife, and is closely involved with all that side of their project. They are crowdfunding now and I recommend supporting them.

I recently met the founders of Roots Allotments, an enterprise starting allotment sites close to large towns through the UK. The first plot of 8 acres is near Bath. All of the rented spaces are no dig, and they are not cheap but include help and compost, and will be particularly useful for anybody gardening for the first time, an easy and effective point of entry.

The third photo is from a film producer in Israel, who contacted me well over a year ago and we have conversed a little since then. He is ultra impressed with the results of his no dig garden and is working to publicise the method to great effect, see this video