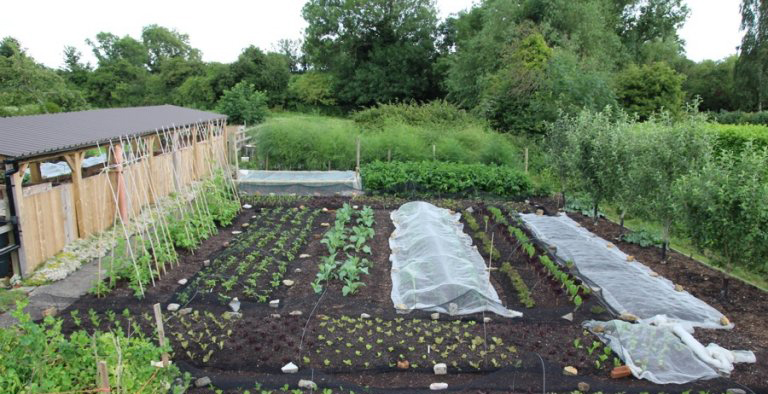 The long days of July are great for sowing and replanting, after summer harvests that are increasing in quantity all month.

No dig makes summer clearing and planting an easy process. Clear the few weeds there are, twist out stems of the first-harvest plants, leaving their roots in the soil, and replant (for faster results) or resow. There are many more tips and ideas in my Diary, and our new book, both selling at reduced prices.

Here it takes 5-6 weeks to fill a bay of 1.5m square, from the 3,000 sq.m garden (1,000sq.m cropped). I leave the full heap to cool down for 6-8 weeks, then empty/turn into an adjacent bay, see video. This mixing/turning admits fresh oxygen and improves the compost quality.

Heap temperature often touches 70C now and that is a little too hot, killing beneficial microbes: more brown ingredients keep temperatures lower. I have been adding some spare and rather woody green waste compost to my green ingredients, as well as shredded stems of elder.

For those who wonder where best to buy it, eBay offer a decent option though you have to buy a lot. It keeps for several years. Thanks to Adrian Eyre on You Tube for this. I have not used any yet as there are only a few butterflies: wait until you see the first small caterpillars.

In Denmark, Steph and I saw Bo Egelund’s no dig garden> He is a doctor so has limited time: he covers brassica beds with mesh, over hoops of electrical conduit. Two metre lengths of conduit span the 70cm beds, which are mulched with horse manure + its bedding of sawdust. Bo has just had a book published on self sufficient living, including beekeeping and energy supply, pub Koustrup & Co. They have also brought out a great book on edible flowers by Aiah Noack, an experienced and knowledgeable lady with a PhD in horticulture.

In early July you can sow so many vegetables: kohlrabi, lettuce, leaf beet, chard, endive, chicory, Florence fennel, chervil, coriander, beetroot, carrots and savoy cabbage. The last three are best sown in the first week, so they have time in autumn to reach a decent size. A waxing moon means seeds will emerge rapidly.

After mid month, I recommend some first sowings of land cress, Chinese cabbage and spinach. Then at month’s end, we come into the sowing season of mustards, pak choi and salad rocket, although the first week August is often better for these, to have longer-lived plants and less flea beetle damage to leaves. And the best date for sowing true spinach, is early to mid August.

You can sow up until mid July for harvests of small to medium roots in late autumn. If you cannot find any bare spaces, it’s possible to sow between maturing vegetables that offer enough space, such as rows of onions and frequently picked lettuce.

Extend the season by sowing beetroot in modules, four seeds thinned to average four seedlings per module. Plant after four weeks at 15in (37cm) apart. Or sow direct, but beetroot seedlings are often eaten by birds and woodlice.

Fantastic growth from sowing in July makes chard a banker for autumn, even into winter and spring. Choose the stem colour you prefer or sow rainbow chard for harvests of many colours; first picking is around eight weeks from sowing.

Until the middle of July you can sow kale, broccoli and cauliflower (the latter two for spring cropping), then turnips in early August, for harvests over a long period. Brassicas’ natural germination time is summer, after seeds fall in June, then they grow fast and large before winter. Best sow in trays or modules, to plant three to four weeks later.

This new video will help if you are unsure about what to pinch out.

The method of training aubergines on two stems was taught me by Felix Hoffman who worked here last spring. He now runs a no dig market garden, part time, in Mannheim.

A friend Alan Cavill gave me plants in February of a speculative sowing he had made on Christmas Eve (!), of Apache chilli. I kept them going over my hotbed and potted them on, now there are red chillies already.

The Magno peppers from www.organicplants.co.uk are fruiting well, indeed with more fruit per plant than I have managed before. But where there are ants in the soil, growth is weak, and I know no remedy for that except extra watering.

Growth has been fast, and most of Homeacres tomatoes were sown 20th March, my latest ever. Only the Sakura and Velocity are bought plants as plugs in April, and they are on grafted rootstock.

Each winter I prune the new branches by a third to a half, and in early July I cut off a foot or so of each new branch to keep trees within reach.

We have thinned the fruit, after a mostly good set this spring.

Vegetables such as French Beans, Brussels Sprouts, and Swiss Chard have seen sales grow by up to 44% this season and even varieties named after European towns and cities have done well. Top performers include Carrots Paris Atlas and Amsterdam Forcing 3, Lettuce Barcelona, Tomato Roma and Florence Fennel.

“I’m not sure this is due to a conscious decision by our customers, perhaps something is influencing gardeners at a subliminal level?” says D.T. Brown’s Tim Jeffries. “However, Grow Your Own has never been more popular and we’ve seen a huge increase in vegetable seed sales this season, driven in part by rising food prices and import problems earlier in the year.”

• Lettuce Barcelona up up 4%

British varieties not doing so well

• Courgette Best of British down 30%