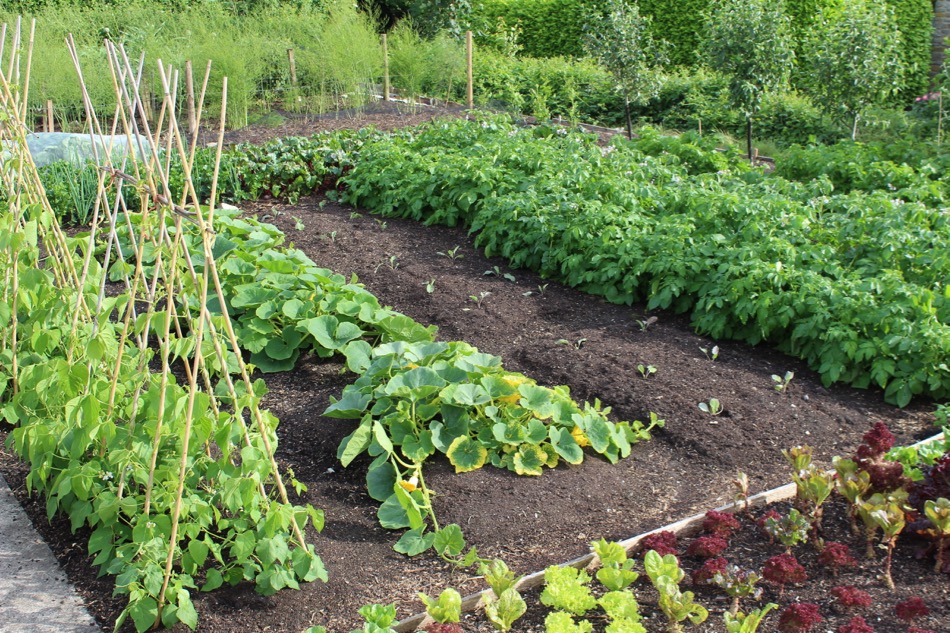 Looking back over spring, it started cold and then was good. May and early June growth was as fast as I have seen, until the wheels came off recently with the arrival of wind and rain. A British summer has installed and I feel less optimistic, slugs are breeding fast.

If the summer stays cool, dull and wet, it will highlight the importance of undug soil (good structure and drainage), together with sowing suitable varieties at the best time to maximise the season. Squash for example are at their climatic limit even in southern Britain, and want setting out as strong plants by the end of May. No dig helps because soil stays warmer under a dark, compost mulch, and also because capillary conductivity remains unbroken, so that warmth (and moisture) from deeper levels can move freely.

A friend pointed out the endorsement of digging in July’s Gardeners World magazine by Monty Don.  He makes it sound romantic, with no reference to the destruction of soil life.

I think he personally likes no dig, but his job involves writing for diggers too. Or perhaps he does think digging is worthwhile, its hard to know! Meanwhile some inaccuracies are frustrating, especially his claim that “If you make raised beds you have to dig the ground initially”. No wonder people get confused.

Below are images from Homeacres, all weedy pasture 40 months ago when I arrived.

The soil has never once been dug or disturbed, two beds/strips excepted.

Now its a productive and easy to run garden which also demonstrates how beautiful a vegetable garden can be.

its ten years since I started comparing and harvesting the same vegetables in dug and undug beds. Mostly there are few differences, for all that effort of digging. But there is usually more weeding needed on the dug bed, while undug beds hardly grow a weed after May, once the weed seeds in its surface compost have germinated.

There is plenty to eat now and already its time to be putting vegetables by, such as garlic. Softnecks want to be harvested now, if you have not already, and hardbacks by mid month. Its only a fortnight until second early potatoes such as Charlotte can be gathered, and they can store until next April, make sure tubers are dry and keep them in paper sacks, frost free.

I have been impressed by Cabbice cabbage (Mr Fothergills), sown in February and planted late March, fleeced over for a month against cold winds. The heads weigh over 2kg (5lb), taste great, and have matured before the butterflies are numerous, so I have not needed to cover them. Same story for early calabrese. The Cabbice came from Delfland nurseries who sell a good range of vegetables for summer planting, use this link and code CD16F for cheaper Cabbice plants – one free pack per household, you pay postage £4.95.

Many second crops are possible when you can be prompt with clearing vegetables that are finishing. For broad beans I often remove them (cut at soil level) when there are still a few pods on, because there is such abundance now that a few extra beans are less valuable than some space to plant. This also means that more nitrogen nodules are left in the soil, before the ageing plants can use them up.

New sowings include lettuce, endive, chicory for radicchio, spring onion, carrot, beetroot (asap for these two), coriander, Florence fennel, kale and purple sprouting broccoli for spring. Sowing undercover gives more chance of plants getting away from slug damage. And keep on top of weeds, sow and plant into a completely clear surface.

These different topics all come down to the two main things needed for successful vegetable growing: high fertility and few weeds.

Under the green polythene, weed-suppressing cover is a three inch layer of 50% homemade compost, 50% two-year-old cow manure. There is also plenty of field bindweed and some couch grass at one end, now dying from lack of light while the squash plants are growing.

The new beds next to it had polythene over the weedy jungle in February, then we removed the polythene and mulched with six inches compost in April between the temporary wooden sides, which are old fence posts: I remove them in autumn.

In the paths, under the mulch of shavings is a thick layer of cardboard. Some couch and bindweed still needs pulling, regularly, where it appears through the planting holes and a few gaps.

After this first year of heavy mulch, which leaves almost all perennial weeds dead or at least in abeyance, its generally possible to mulch with compost only, and have few slugs.

When to harvest potatoes

Another myth abounds and confuses gardeners, “that potatoes need to flower before harvesting might be good”. Such statements are misleading because it depends on potato type and variety. Many first earlies do not flower and the signal for harvesting them is leaves going yellow, best pull tubers before half yellow. Now if you have not already.

I am noticing this year that some bought Charlotte seed (second early) is not flowering, while plants from the home-saved Charlotte are in flower. No idea why but I shall harvest them all when leaves are about a quarter yellow and tubers are swelling above ground. I need the space for leeks, by mid July.

If the leaves suffer blight, harvest will be earlier. When you see the first blight, unless its become fine weather again, I reckon to cut off haulm to  ground level, compost all the tops (that is another myth, you can compost them (see below)  and I recommend to harvest asap after blight appears.

Update 7.30am, June 30th: since posting this a French friend Nicolas Rouchon-Roche (no dig grower in S. France) sent this helpful comment: “the head technician working at Desmazieres (company creating new potatoes varieties like Cerisa) told me flowering potatoes was not a healthy sign, as gardeners usully think. When a tuber plant goes fine, it generally does not flower (depending on variety also) as its reproduction is done by tubers. So flowering occurs if drought, disease or something bad happens. He also advised that home made seeds are best kept at 4 to 5 degree celsius, witn no variation in temperature at all”.

There are many possibilities but you need to be organised about timing and spacing. The spring onions below are an option between celeriac, both planted at the same time in May, because they can use the wide space before it closes – which is soon: we shall harvest these spring onions over the next fortnight.

Possibilities for July include planting coriander with new broccoli, beetroot between maturing onions and sowing carrots between finishing leaf lettuce – though watch out for slugs on this one.

Its also a good time to think ahead and order apple trees for planting this autumn/winter. My one year trees cost just £10 from Walcote Nurseries and ordering early gives you more chance to buy the varieties you want.

Blight spores cannot survive in soil or compost, see this link http://www.bbc.co.uk/gardening/advice/pests_and_diseases/identifier.shtml?blight  – and this https://ag.umass.edu/fact-sheets/late-blight-on-tomatoes-potatoes. The latter mentions a difference for the southern USA where blight spores can survive in soil, but they do not in northern latitudes including the UK.

Unfortunately confusion arises because the RHS advises that “Infected material should be deeply buried (more than 45cm deep), consigned to the green waste collection or, ideally, burned rather than composted”. The links above, and my long experience, show that this is wrong advice. Also its environmentally destructive.

On a different topic the RHS advises that digging is necessary before planting asparagus and that it requires fertiliser each year https://www.rhs.org.uk/advice/grow-your-own/vegetables/asparagus. My asparagus disagrees on both counts.

I find it frustrating that gardeners are often advised to do unnecessary work, spend unnecessary money and do unnecessary harm to the soil and soil life. For example the peas you see below have been so easy to grow, just mulched with compost, in soil that had bindweed and couch grass three years ago.

So don’t believe everything you read or are told, ask for reasons if something seems wrong. Be sceptical of my writing too, but its all based on garden experience and the growth you see here.

The annoying part of gardening. Its not butterflies this summer but slugs. Reducing habitat is key, traps, wool barriers, sorties at dawn and suk with a knife or bucket. Its ongoing, no easy answers, avoid mulches of unrotted materials.

Now at Homeacres I have a tame, young rabbit who loves lettuce seedlings above all. So more plantings are netted than normal, and sometimes the rabbit slips underneath. Larger plants are left alone.