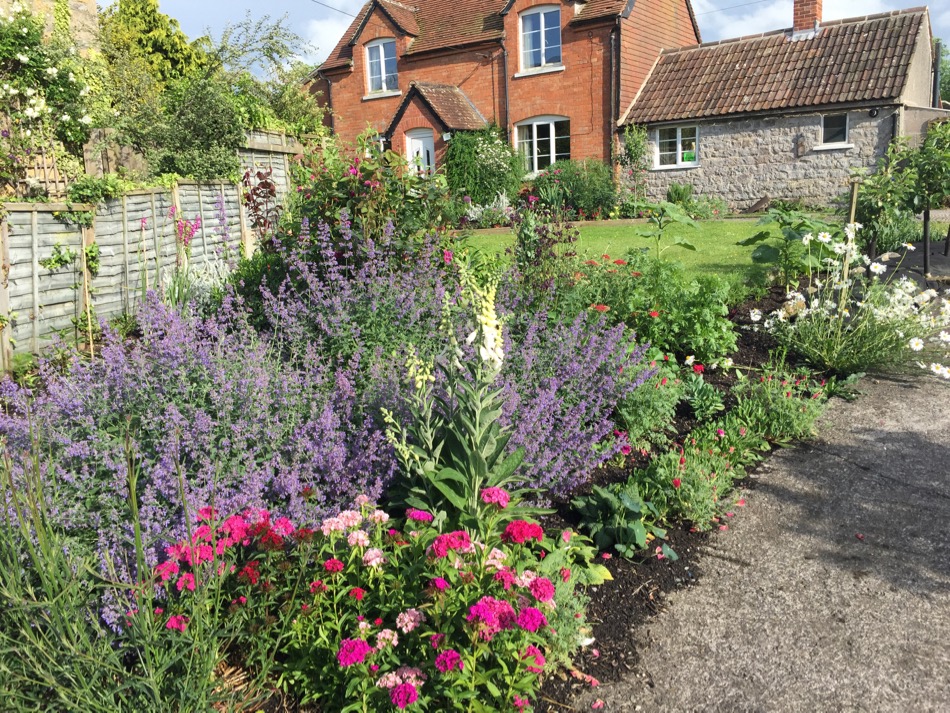 Its still that amazing time when growth is so willing, just as crops begin to mature and before some of the lushness turns less exuberant. Watch for yellowing of first early potatoes which are ready when about one third yellow-leaved at the bottom. Some of them do not flower so there is no need to wait for that.

Weeds should not be a problem if you did your preparation last winter, and can do a small weekly weed now. But if, say, you took on a weedy allotment this year and are struggling to keep up with weeds, I would consider a polythene mulch on some parts at least, see https://charlesdowding.co.uk/no-dig-growing/no-dig-growing-preparation/ for ideas.

Its not only veg that like undug soil, flowers do as well! At Homeacres I grow a mix of annuals, biennials and perennials. My June favourites are self seeded honesty and escholzia, including a pink one, roses, geums, catmint and  sweet williams.

Its British flowers week until June 19th and many growers offer courses to share their knowledge, see http://www.gracealexanderflowers.co.uk and http://www.commonfarmflowers.com/workshops/

One of gardening’s greater mysteries, and I have learnt a lot more this spring. The second ‘made-in-a-day’ heap lost its heat in similarly spectacular fashion to the first, after four weeks. Its currently underneath a six inch layer of old manure with melons planted on top, so they will be disappointed by the lack of warmth! The sudden cooling is perhaps due again to wetness from grass clippings, though the heap never had water added and included some dry ingredients, see  https://charlesdowding.co.uk/june-2016/

If buying green waste compost, beware that it may be fresher than it looks – the heap I just bought is black, but its temperature is 61C and I would not use it now. Its for spreading this winter.

Meanwhile Felix offered to empty the greenhouse hotbed of horse manure, where woodlice were becoming a pest to brassica and cucumber seedlings. The manure ranged in age from mid February to mid April (mostly the former) and is now in a heap underneath some aubergine plants grown by Steph.

I am impressed no end to measure 53C in that heap of manure, and it was 61C after being moved. The aubergines are growing in a surface layer of well rotted horse manure from Jenny my neighbour. We knew this to be good from how some Jerusalem artichokes are growing in a new bed made entirely from it, simply placed on a very weedy area.

Its prime time to sow carrots for autumn and winter if you can find space. In modules you can sow beetroot to transplant after say four weeks, by which time some early harvests will be finished. Also sow kale, purple sprouting, calabrese, savoy cabbage, more salads including endive, and perhaps some dwarf French beans.

Incidentally its full moon on Monday 20th and Saturday 18th is a leaf day,  propitious for the brassica and salad sowings.

Rust has struck again on the outdoor garlic, even on garlic grown from new seed and in a new bed where there cannot have been any spores in the soil. On the other hand, it has not yet damaged some garlic growing between two apple trees, so I shall try that again this November.

Also my “free” garlic, planted November between indoor salads and finishing between new plantings of tomato and cucumber (see earlier posts) has stayed clear of rust and yielded well.

Most softneck garlic wants harvesting by the end of June, when many leaves are still green, or by mid July for some hardbacks mostly.

In March I module-sowed some of Hodmedod’s Carlin peas, to harvest dry, and they turn out to have beautiful flowers too. Also I took some green lentils from a jar in the kitchen and module-sowed them, then planted in April after lambs lettuce, and they are just starting to offer little white flowers, on very healthy plants. I am intrigued.

You can use mesh covers to deter carrot root fly and brassica butterflies and moths. They are not 100% secure but make a worthwhile difference. Currently I have some carrots uncovered and there are no root fly maggots, yet.

Summer slugs are emerging. There is some nice advice from Anne Wood on using Felix Tosta, a homeopathic potion made from snail shells, to deter molluscs, see https://charlesdowding.co.uk/forums/topic/paca-lettuce-and-slug-attack/

Pea moth arrives in July, a good reason to sow peas early and have them ready from now.

The West Riding multipurpose compost continues to impress me, look how rich these basil are, in small pots and without any feeding. Also some lettuce grown in homemade compost is growing better than one in well rotted cow manure. Best lettuce growth is from spreading the compost to dry, before filling the pot, because it had been somewhat anaerobic in my winter heap, due I think to the grass mowings holding so much moisture.

This is a small but potentially painful possibility from using horse manure, if one were unlucky enough that the horses had eaten hay sprayed with Dow’s lethal poison. I do a simple check on Jenny’s manure, using in this case tomato and runner bean, planted into pots packed with fresh horse poo.

Fortunately they have grown fine and I am intrigued to see how many new roots are growing in the fresh manure. The old saw about fresh manure “burning” roots applies mostly to chicken manure.

A different issue with horse manure can be wood shavings used as bedding. If you see even small signs of these, I would not use the manure. At Jenny’s we take manure only from heaps with straw bedding, otherwise any wood takes years to break down and sucks goodness away from plants.

Its so busy here now with many harvests to make as well as new sowings and keeping the garden tidy. Spinach is finishing as it rises to flower, being replaced by chard. Nantes carrot, Boltardy beetroot, first early potatoes and November-sown beans are all good. Peas of many types are yielding their sweetness, Caraflex and Golden Acre cabbage are hearting, calabrese and cauliflower are just starting and courgettes have given a first pick, with indoor cucumbers not far behind.

June here is the most exciting month for new harvests. And July is not far behind.