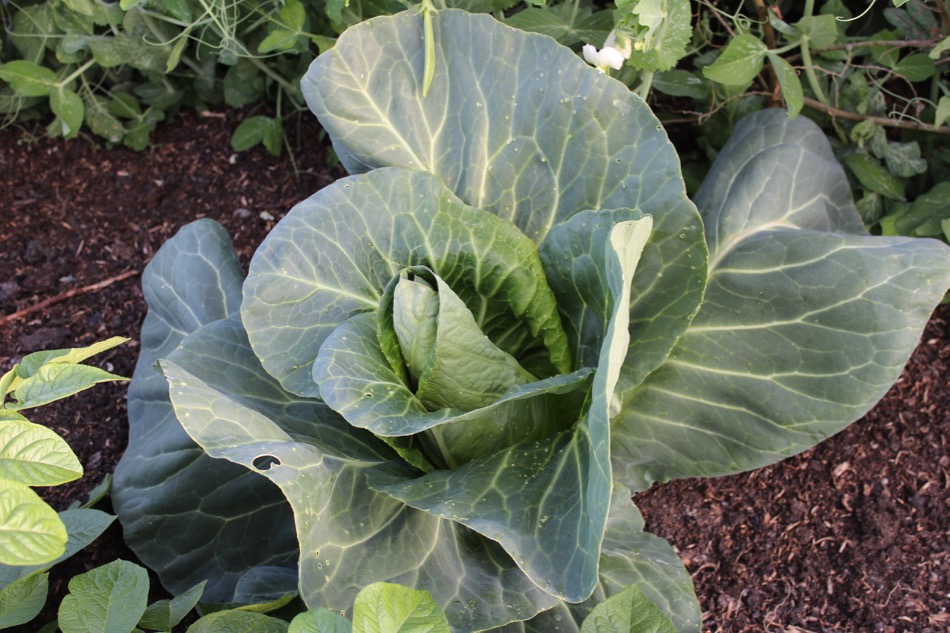 Despite a dry May (just 17.9mm here in May’s last 3 weeks), plants have sprung out of the ground like unleashing coils, with warmth complementing the long hours of daylight. The photos say it all, such as potatoes invisible on May 4th after frosts, then abundant by May 30th.

In polytunnel and greenhouse, May has been about clearing winter salads, spreading 3in (7cm) compost and planting summer crops into that. This compost is the only feed until next May, first for tomatoes etc and second for the salads we plant in October, to crop all winter. This year’s compost was half home made and half mushroom compost on top.

Now however there is a growing need to water, unless you have been lucky to catch a storm. Priority is new plantings until established, salads and celery.

Its still possible to sow runner and French beans, courgettes and cucumbers, and there is still time to set out plants of winter squash, celeriac, sweetcorn and autumn-hearting cabbages, but don’t delay.

For summer salads, sow more lettuce and perhaps frizzy endive too if you like bitter leaves. Endive is useful if lettuce suffer from root aphid in August. Sow more coriander and dill, plant basil undercover if possible, or in a sunny spot – and don’t overwater it, especially in containers.

First of the summer harvests

I love June for its exciting first harvests. Already we have enjoyed carrot thinnings from March sowings, nicely brought on by fleece covers throughout the cold April. From now on its worth covering carrots with mesh, to keep most carrot fly at bay.

Also we are harvesting Caraflex pointed cabbage, again February sown, half-hearted and weighing a kilo each. Kohlrabi and broad beans are ready this week, peas and calabrese in two weeks time, courgettes too.

Meanwhile spinach is starting to flower and I plan to sow carrots or plant swede after clearing.

Its a good time to plant outdoor tomatoes, or undercover if you have not already.  I am doing a trial of different outdoor varieties in pots, to see how they resist blight.

Undercover, cordon tomatoes need regular removal of side shoots and any yellowing leaves at the base. At the moment its fine to water their leaves, since blight spores are not prevalent until any arrival of humid weather, usually from late June. At that point, take care to water at the base only.

If you are new to no dig, take heart from the photos of long carrots and parsnip roots. Achieve this by feeding soil with surface mulches, to encourage the organisms that maintain an open structure.

The mulch I recommend for Britain and other damp climates is compost, because it does not harbour slugs.

This confused some visitors from Shift Bristol permaculture course, who looked at the garden and asked f I do any mulching: they thought mulches are only of undecomposed materials such as straw, hay, grass, cardboard etc. If I used those here, there would be no early carrots or slug free salads, because of slug numbers.

See also Steph’s recent blog on preparing soil for planting with a compost mulch, as food for soil and plants, https://nodighome.com/2016/05/31/mulching-and-planting-my-no-dig-polytunnel/

Homeacres is open on Sunday June 12th from 1-5pm, as part of Alhampton’s open gardens event, get your ticket for £5 at the Alhampton Inn. My neighbour Gert Schley’s garden is one of the ten to visit, its the best permaculture garden I know, well worth checking out.

On Saturday 11th is an open garden event at Vine Farm in Staunton, Glos GN19 3NZ http://www.vinefarm.co.uk/Vine_Farm/Vegetables___Fruit.html where Alex and Jane Morton have been growing no dig vegetables for ten years, as well as establishing a cherry orchard and small vineyard.

Also on 11th are many workshops, including mine on salad growing and no dig, during the Landworkers Alliance Land Skills day http://landworkersalliance.org.uk/calendar/?mc_id=142 at Thorny Lakes near Langport in Somerset, TA10 0DW.

Thanks to Felix’s help, another compost heap has replaced the one he spread already, just 26 days from assembling it. He spread it, five large wheelbarrows, on a weedy area that had been mulched with polythene for six weeks, two inches deep and with an inch of old cow manure on top. Then we planted Crown Prince squash through holes in the polythene.

The new heap is 60% green (nettles and grass) and 40% brown (straw, fresh horse manure, small wood chip and pine needles). The difference this time is that we added no water, after finding the previous heap too wet towards the end, which meant too little air. I think this caused its heat to suddenly dissipate after 22 days.

The current heap reached 68C after two days, has not exceeded 70C and is currently 56C after ten days. The plan is to turn it this week, more to follow in next update.

Compost extracts and microbes are two ways to achieve strong growth with less compost. Compost teas are possible too but require some special kit, so this is a quick look at something simple.

We have compared growth of leeks and chard in multipurpose compost made by West Riding and Klassman. The first is based on eco-peat sieved out of Yorkshire reservoirs, the second on peat from bogs in Germany.

Klassman has given better germination of seeds and stronger early growth, with no weeds. West Riding sometimes has seedlings slow to start but they tend to catch up and grow well for a long time.