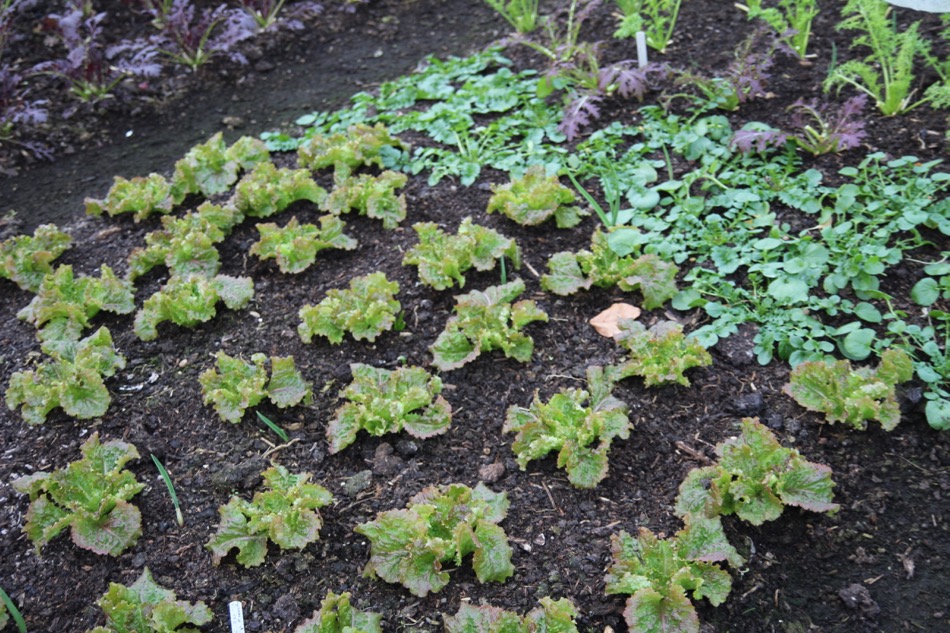 Harvests in 2007-2012 from the dug and undug experimental beds at Lower Farm, Somerset, UK.

Background to the experiment

The four beds of 1.5×2.5m (5×8′) were created in March 2007 from old pasture on clay soil, and the first section below is a record of their total harvests over six years. Below that are tables of the harvests in 2011 and 2012. In their sixth year without any soil disturbance, the two undug beds have performed better than ever.
This experiment has now finished as I have moved from Lower Farm, and am running a new one at Homeacres.
Each November or December, as soon as the last harvest is taken, I spread a large wheelbarrow load of compost or manure (two inch depth or 5cm) on the two undug beds and I dig the other two, at the same time as incorporating an equal amount of compost or manure at the bottom of 15-20cm (6-8′) spits*.
The idea is to have two pairs of beds with the same ingredients, but in a different profile – also one of the beds has undisturbed soil, one has disturbed soil.
In November 2008, beds 1 and 2 (undug and dug respectively) received home made compost while beds 3 and 4 received horse manure from the neighbour’s well rotted pile.
In November 2009, beds 1 & 2 received well rotted cow manure – purchased from a neighbouring farm and checked for aminopyralids by doing a germination test – while beds 3 and 4 received home made compost.
In November 2010, beds 1 & 2 received home made compost, beds 3 & 4 received cow manure.
In November 2011, vice versa again.

The data here is of harvests weighed, trimmed and graded to my normal standard for selling produce. I also append some comments on any problems encountered and on quality of growth.

All beds carry a mixture of single and double crops, so there is rarely any empty space in the growing season. Plants are raised in my greenhouse in modules filled with organic multipurpose compost from West Riding Organics.

*My digging method (single dig) is to put the first spit of soil into a wheelbarrow, from a 25cm (10’) row across one end of the bed to be dug, then manure or compost is placed in this first trench before soil from making a second trench is put on top of it. The barrow of soil is used at the end to fill the final trench and the whole process takes just under two hours.

* Early harvests are beetroot, chard, lettuce, onion, peas, potatoes, radish and spinach. Late harvests are all other vegetables listed here. The last two columns show how the no dig beds start growing more quickly in spring, followed by the dug beds catching up somewhat in late summer and autumn.

Comments and comparison with 2011

There are differences between both dug and undug, and between 2011 and 2012: notice the lower yields in 2012 when the incessant rain had more impact on dug soil, from what I can see here and from the comments of other gardeners. Undug soil preserves its structure in wet conditions, and also can be accessed more easily as it does not damage from being walked on.

Summing up, less good weather in 2012, lower yields, most noticeably on the dug beds which have suffered most with a 28% reduction compared to a 19% reduction on the undug beds. Root vegetables all better on the undug, except for parsnip and that is a puzzle as in 2011 it was the other way around. These results are indications of the enduring validity of a no dig approach, and highlight some intriguing variations for each vegetable.

Beds were sown with parsnips and radish in late February, planted with spinach, lettuce, potato, onion, beetroot, cabbage and tall peas in mid March, with carrots sown too. Then all four beds were covered with fleece, and the three photos below show what was happening under this fleece by early April.

Harvests already of 1.7kg lettuce, spinach radish from Dug and 2.4kg from undug, both lettuce & radish higher yielding on latter.

Through large parts of April, early May, June and the first half of July, the area as a whole was something of a quagmire, the paths running with water on some days, thank goodness for raised beds!

Harvests have been steady off both dug and undug beds, and yesterday I even pulled the first  beetroot, by carefully twisting out the largest root from four of the five clumps on each bed.

The most notably different harvests have been of spinach, which is much stronger and darker on the undug bed, and of cabbage which was more hearted on the dug bed. Presumably this is related to their different rooting habits, and I have heard that brassicas use no fugal mycorhizae to grow their roots, and digging destroys many soil fungi, so this would make sense – the spinach presumably does use mycorhizae.

Look at the soil differences in these photos:

This table shows harvests off both pairs of beds up to end August. I am about to start harvesting french beans and kale, with more endive and salad to follow, then parsnip and celeriac in late autumn.

Growth continues to look healthier on the undug beds, assess it for yourself in these four photos, all taken on 29th August.

The celeriac were harvested late October and although looking nice, they turned out to have many slug holes with woodlice too. Whereas the same plants grown in beds without wooden sides had almost no damage, so that is an interesting result too!

Through April and May growth was steady in above average temperatures, and I watered all the beds about once a week. Lettuce and spinach are being picked weekly, potatoes and beetroot are almost ready and peas are flowering. Carrots have germinated better on the undug bed, I think there were more slugs on the smooth clay surface of the dug bed.

By September 2011 there are many second and even third plantings, such as Redbor kale after lettuce on beds 1 & 2, where french beans have grown after potatoes and carrots, and after them we planted winter purslane and spinach. It has been interesting to watch the growth of salads planted in September because of the much greater slug damage on both dug beds, compared to same plants on the undug beds. It looks as though slugs are more comfortable slithering over a surface of clay soil (where compost has been incorporated) as opposed to a surface of crumbly and less smooth compost:

On the other hand the dug bed’s celeriac is bigger and the chicories are showing more heart! Whereas the winter radish in front has grown more strongly on the undug bed.

*no mildew this year, the cleanest bulbs since 2003, after I stopped growing overwintering Japanese onions in 2009

Parsnips, higher quality with less canker and forking on undug bed
Radish grew better on dug bed, for the first time in five years
Spinach was earlier on the undug bed then the dug spinach almost caught up
Lettuce was similar, dug lost plants to slugs and replacements were higher yielding variety!
Carrot seedlings on dug bed were more eaten by slugs
Potatoes were more numerous under plants on dug bed
Kale on undug bed had thicker stems and darker, glowing leaf colour (stems weighed post harvest, 1.73kg dug and 2.00kg undug
Beetroot and leeks grew bigger on undug bed after getting away more quickly in spring
Celeriac caught up on dug bed and were much larger but also with more slug holes and woodlice
Onions were similar but undug onions started growing faster in April and May
Chicories hearted more strongly on dug bed
Rocket, 3 plants on each bed, then two dug rocket were eaten by slugs
Lambs lettuce was noticeably larger and glossier on undug bed
Winter purslane grew so much better on undug bed, was slug eaten on dug bed, spinach too

2010 totals a little lower than 2009, from growing no turnips or chard and from some damage by leek moth. See This Month December 2010 for some commentary on these results

All first sowings and plantings complete by late March and beds were covered with fleece for one month. Worse slug damage on the dug soil as slugs prefer the clay surface to lumps of less smooth compost. More lettuce replaced on dug bed in early April. Second plantings in July & August.

Parsnip quality much higher on undug bed, little forking compared with more than half of dug parsnips forked and a little more canker on surface.