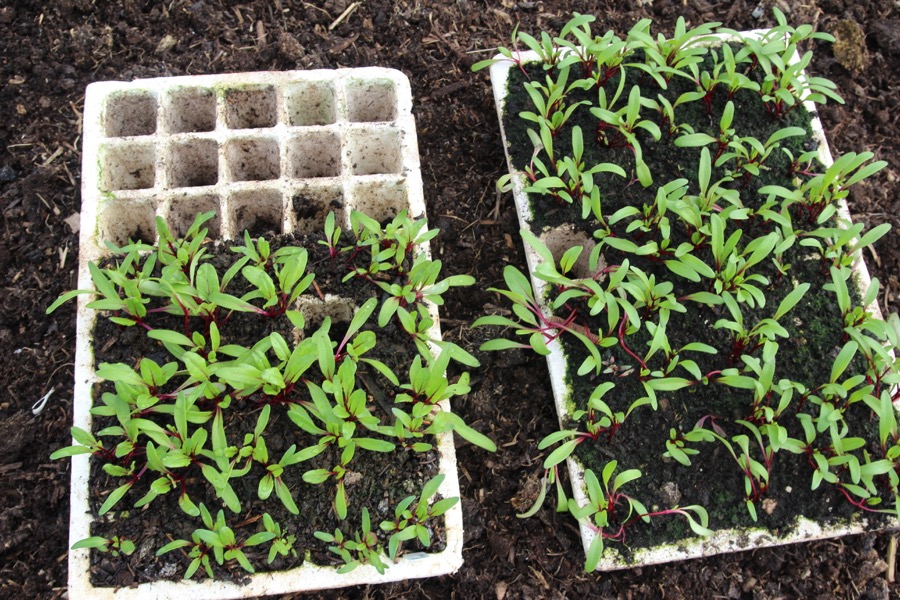 Exciting times, spring energy rising in the UK at least. From reports of weather in some of the USA and Scandinavia, we are fortunate to have mild temperatures and in Somerset. the first two weeks have seen average night minima 5C/41F, day maxima 12C/54F. Last year in comparison, the same two weeks in early March were 1C/34F and 10C/50F.

So you never know, but the important thing is to respect your calendar of appropriate sowing dates, which are the average that works every year. Don’t sow too early, especially warmth loving plants such as courgettes and French/climbing beans. Undercover, I sow basil first week of April, courgettes and squash in mid April and summer beans on 10th May: they grow more quickly in warmth and overtake the earlier sowings. I am sowing tomatoes next week.

Sowing no dig, into surface compost

When the compost is light and of good quality, it’s quick and easy to draw drills for sowing.

If your compost is wet and lumpy, I would consider raising plants rather than direct sowing.

Usually, this is a benefit of having spread compost in autumn, giving time for winter weather to have softened it. But it needs to have been well decomposed when spread.

It’s effective and simple, lay fleece directly on top of seedlings. Then they can bask in the surrounding warmth during any sunshine. If you raise fleece on hoops, the warmth rises away too, plus covers are more vulnerable to damage in high wind.

Here I use a stone every 4ft (1.2m) along the sides as a quick way to hold fleece/row covers in place. Then it is quick to remove for weeding and soon, picking.

Get these seeds going, but for many veg it’s still worth waiting

See my sowing timeline to sort out your dates. Actually I cannot find it on the new site, sorry! Meanwhile I have copied the first four months below. First early potatoes and onion sets are now in season to sow, among many other seeds.

A golden tip is to use any warmth for germinating seeds, and after the first leaves appear you can lower the temperature. I use the hotbed for seeds and seedlings, then move plants to an unheated bench – the greenhouse has no extra heating.

Peas are a seasonal example of this.

Dwarf peas grow to about 60cm/2ft high and may support themselves, though s few small branches to support them will make picking easier.

Keep on top/ahead of weeds!!!

This is now a key job, to save you so much time in all the months ahead. Hoe weeds before they have a true leaf, even when they are barely visible. Run the hoe shallowly through surface compost: it’s a glide, not a hack. Effortless.

Or scuff the surface to dislodge hundreds of tiny seedling roots, to dry in andy sun and wind.

Big job avoided, of larger weeds in weeks ahead. Be proactive. Likewise it’s good to keep removing older, lower leaves of broccoli to have less habitat for slugs.

Steph reveals her mastery of Homeacres’ small kitchen and large range of vegetables. She prepares everything on the morning, and washes up by hand, after I bake the rye sourdough bread.

The first plants to flower are tatsoi, and salad rocket is not far behind. Mustards, pak choi, spinach, chard, endive and lettuce continue to grow nicely under cover.

Check this new video on making compost, ingredients and some results. Gather some brown materials for adding to the greens of spring and summer. Suddenly my heaps are over 60C as we add the first mowings of grass and edgings to shredded wood, straw, cardboard, kitchen scraps, wood ash and coffee grounds.

Check this from a young German seed company, Culinaris. They go for flavour, and their tomatoes do resist blight. You can buy packets of 30 seeds and min order value is 25 Euros.

Sow outside broad beans, garlic if not already

Sow undercover as for March (except its getting late for celeriac, sow asap), leeks, leaf beet, beetroot (all varieties), chard at month’s end, tomatoes for outdoor growing. With warmth and around mid month, cucumber, courgette, squash, sweetcorn

Swede at end May

Sow outside same as undercover, also maincrop potatoes in early May, carrots, parsnips but keep seedbed moist until germinated.

From Roscoe Gibbs, commenting on my video about storing vegetables:

“I’m so glad I found Dowding’s methods before I started my allotment. It worked great last season and now once again he has pulled it out of the bag with information I haven’t heard anywhere else, that will save me time and effort on storing. Thanks again Charles. Everyone at my allotment thinks I’m nuts and lazy, but I think they are slowly coming around.”

No dig, no till

Article: Getting down to earth