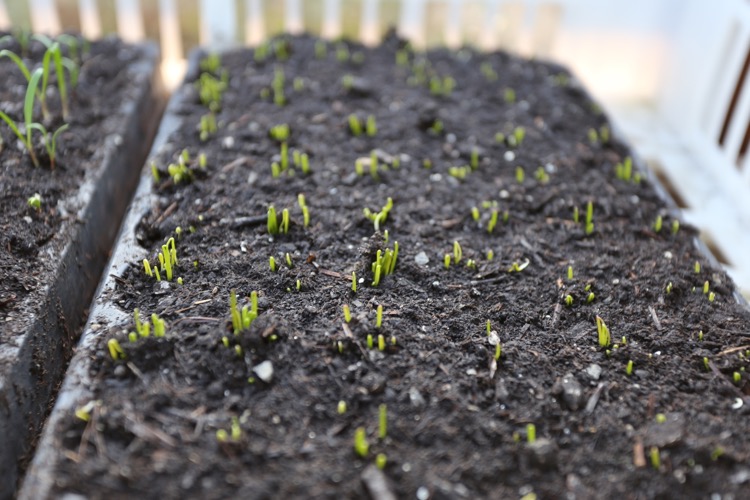 It feels like an early spring here, yet it’s still winter, just! Choosing what to sow and plant becomes confused when the seasons go out of order, and generally it’s best to stick with the dates you know, because the weather can change so much. Look at the snow last March for example.

All the vegetables we sow at this time are frost hardy, so they survive a light freeze. This means less worries about seedlings outside in unheated structures. When I say undercover or indoors, I include unheated polytunnels and greenhouses in that category.

Tomatoes are an exception to the frost-hardy theme, however I do not sow mine until the third week of March. Also don’t chit potatoes in a cold greenhouse where they might be damaged by frost.

Seeds need more warmth to germinate than seedlings need to grow. Therefore windowsills in the house are great for the first 7-14 days after sowing. You can even stack trays one on top of another for the first days as they don’t need light to germinate – just be sure to unstack before leaves appear, often 4-5 days after sowing, depending on temperature and the vegetable.

I germinated a lot of seeds like that this year, before using the greenhouse.

On 20th Feb. we made a hotbed in the greenhouse, of fresh horse manure. It heated to 65C/ within two days, and its rising heat warms the module and seed trays sitting on the wooden frame above it. However new heaps make ammonia gases for a few days and it’s smelly in there – I need to ventilate all the time.

From mid March you can sow all of these outside in milder areas of the UK, and plant onion sets too.

A different category is seeds and seedlings that need higher temperatures, so give them warmth, especially aubergine, pepper and chilli – sow these by early March. Then celery, celeriac mid month, then tomatoes 15th-20th March works well for having decent sized but not huge plants by early May.

I wait until early April before sowing basil, and mid April for cucumber and courgettes/squash, all under cover and on heat.

March has sold out so we are selling at April now, with places on 6th, 7th and17th, plus two places on the April weekend course.

A big course appearing 28th February is my new online one. It comprises 27 new videos, 50,000 words and 600 photos, all about no dig gardening and the benefits you enjoy when practicing it, such as time saving and increased harvests. The course does not include private access to me, but there are quizzes after each of the 19 lessons. If you pass them all, you receive a Charles Dowding Certificate of no dig gardening. Currently not linked to an accreditation scheme but valuable because you won’t receive it without showing best understanding of how no dig works, and no dig now receives much recognition. The quizzes are not difficult, but cover all bases.

The course includes a lesson on the small garden with it’s plan of cropping and yields in 2018, from a 25sqm/270sqft space. And a lesson on how we made one bed in 2015, with a 20 minute video of the whole process including planting straightaway. Then you see all the subsequent harvests and new plantings, including some unusual vegetables.

Other lessons include how to make compost, and the value of different composts. I show the results of a trial we did last summer, see the photo.

On 28th a page will appear on this website under Courses where you can read about the online course, and buy it if interested, for £150 including VAT.

See a market garden event I am running near Worcester with Jake Eldridge in September, description and tickets here. Jake’s garden is well worth a visit and we teach a day each.

Steph is running offers on her book Creative Kitchen plus as a double with our joint book, see her blog here.

Salad rocket has overwintered well undercover, some even outside, and is now starting to make flowering stems, with the leaves becoming more pungent. However just last  week it was discovered by pigeons and mostly devoured. I am leaving it now as we have so many leaves undercover: soon we shall twist it out and spread compost.

Wild rocket is different and I just planted some, which has been in pots in the greenhouse all winter, from a September sowing. It’s the only brassica salad I grow in spring, because it flowers so much later than the others. We shall pick and then cut leaves of wild rocket from April until end June, by which time it will be flowering. Flea beetle damage increases through the spring, even under fleece or mesh.

My salad boxes on staging in the greenhouse have cropped little and not that often, still worthwhile though with 1.4kg/3lb of leaves from five picks so far. They will crop until mid April, when the mustards flower, even until May for the Grenoble Red lettuce. They are now outside as I ran out of space in the greenhouse.

Plants growing in soil are suddenly putting on a huge spurt, thanks to increased day length as well as warmth. Leaves are firmer, larger and more glossy.

Outdoors we still have fine beetroot, leeks, kale, many salads and good old Brussels, the photos give you a taste of this mild winter. All are growing without covers but the Brussels have bird netting against pigeons, and the pak choi had fleece over for two months.

I have rats in my winter compost heap, which we shall turn in a month or so. Lat year they left for the fields at that point and I hope it will be the same this year. In the winter I accept they need somewhere to live and their activity in the heap does a good job of mixing and aerating.

At the other end of my bays there is a new heap, which got off to a flying start when Ron Heath from Bristol dropped off some spent hops, fresh from the Bath Ales brewery at Warmsley – check it out if nearby. I like to compost the hops, while Ron had had success with applying them as mulch, especially last summer. He has organised my talk at Keynsham on 26th March, and it has sold out. I need bigger venues.