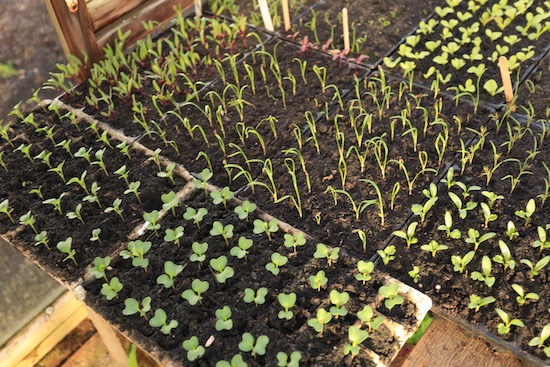 It has been a different kind of winter here, somehow cold and damp in a more damaging way than 2018, when we had bitter winds in March but with less damage to plants. See the broad bean photos below. However, I am encouraged by the broccoli which I sowed last June and it should be cropping within a month, through the beginning of hungry gap time. My new course 3A has a lesson for each vegetable, with lots of these details.

And the plantings I made into the compost of a brand-new bed with cardboard underneath, and strong perennial weeds under the cardboard on 21st November (see video with Epic Gardening), have all done really well. The one exception is direct sown spinach. Transplants generally work better, although the garlic was cloves I popped in.

I heard from a follower in South Sweden who said her broccoli has not survived the winter. Their frosts of lower than -10 C/14 F seem to be a temperature limit for its survival, but also depending how long that level of cold is sustained, whether there is snow protection, and how windy it is as well.

Soon we shall pass that exciting time of equinox and already the days feel amazingly light, even though it’s not very sunny here! In the first 12 days of March we have had four hours of sunshine and the average night temperature has been 1.8C / 36F with average day temperatures of 9C / 48F. Rain to 12th March was 32.4mm / 1.3in, less than normal.

The weather charts suggest that we are not warming up much any time soon, and I think that’s the same for most of north-west Europe. The wind direction at equinox is a clue to the next few weeks of weather and it looks like being more northerly then southerly, so I am expecting a spring more cool than warm, sadly. Fleece covers will serve well for new plantings.

Despite the cool and windy weather, some of us can soon make a few sowings outdoors. I find that late March is excellent for carrots and parsnips here, and you could also make outdoor sowings of lettuce, spinach, onions plus salad onions and shallots, onion and shallot sets, early varieties of cabbage + cauliflower + broccoli, radish, broad beans and peas. For the latter two there is always a risk of mice eating seeds.

Sowing under cover is more reliable, and you can so any of the above plus tomatoes celery, and celeriac. I do not recommend sowing leeks yet unless you want a few for a very early harvest. I do my main leek sowing in early April, together with chard. Both of these have a small risk of bolting if sown too early. Find sowing dates all year in my Calendar, now cheaper in our spring sale.

See the photos and this IGTV video, for how I rapidly prepare beds after winter, for seeds and plants.

I use windowsills and space in my house for most germination at this time of year, five days or so straight after seeding which is when one counts for the most, and before light is necessary. If space allows I also germinate on the hotbed of fresh horse manure, whose surface is currently 39 C/102 F, after we added two large wheelbarrows of more fresh manure, four days ago.

The Moorland Gold compost is performing better now. I am sure it contained some ingredients which were too fresh, not fully composted, partly because of how it is not holding moisture so well as normal. Plus we did not react enough to its being so fine, and should have pushed it less firmly into the cells. After realising this I mixed some new potting compost with the Moorland Gold together with some of my own compost which I sieved, and much of what you see in these photographs is that mix which is growing well so far.

Most of us want to make more compost and at this time of year, there is not a great deal of raw material. I find that my compost heaps fill very slowly until April. We just finished adding to the heap which we started last November, and it had been 3/4 full by Christmas, then has received only small top ups until recently.

A final boost was using the lawnmower to cut some brambles and grass and ivy, which was a quite nice mix of green and brown, more brown actually with the bramble stems in small pieces. To finish the heap, we again used the lawnmower and cut some year old woodchip, to make a capping layer of about 3 cm/an inch. The temperature is only 30 C/86 Fahrenheit which reflects the lack of green. It will become nice Compost but more slowly and with more weed seeds, than if there were more green additions. I should love to add a little fresh manure from the neighbour’s horses, but simply do not dare to because of the potential pyralid weedkiller, see below.

We continue to do some different mulchings of weeds in the new ground. Some mulches we spread six weeks earlier made a great backdrop for the video with Wini Walbaum in Santiago. I first met Winnie on Instagram over a discussion about T-shirts, and one result of that is a new range of no dig clothing in organic cotton! When you buy before end of 14th March, they plant a tree for every order received.

It was such a pleasure discussing with her on Zoom, which has been one small blessing of lockdowns. We are in the process now of making available my courses at Homeacres and first ones in June, do keep an eye on the website.

Sadly the villagers have decided not to hold Alampton Gardens open day on  23rd May, but we may do a visits day then instead – again do watch this space.

It upsets me that this is necessary, but I want peace of mind. Happily, many of you will be fortunate and succeed with clean compost. Then there will be a few of you who do not, and there is no way of knowing by looking at compost, or by talking to the sellers who don’t know either, whether the highly poisonous pyralid weedkiller is in there.

For example in garden waste compost it can come from lawn weedkillers. It is far worse than glyphosate, which does break down in a compost heap. Happily, both batches of green waste compost which I have purchased are free of this poison and even better than that, they are growing excellent plants, as you can see in the photograph on left.

Compared to them, the beans I sowed in freshly delivered mushroom compost hardly germinated, which got me worried. Then three weeks later I sowed peas in the same mushroom compost and they are looking fine, so probably the compost was just too fresh (heap was 50C). That shows how worthwhile it is to buy compost a few weeks before you want to spread it. However this is not always possible and you can still use fresh compost as a thin mulch on the surface, to feed soil life rather than plant roots, but I would not use it to fill a whole bed, until more mature.

I have added the photograph of a contaminated plant to give you an idea of the possible symptoms, which concentrate in the growing point, not so much in lower leaves.

I have been asked by Russ Carrington at Knepp Regen Farms (rewilding) in South Sussex, if I know a grower with experience of no dig market gardening, follow the link. Also there is an opportunity at Roots to Work in central Somerset.

New ground for no dig

My new area is expanding and I have less time than ever before, because of so much computer work. Therefore I have employed a full-time gardener, Adam who lives in Bruton. As well as being familiar with vegetable growing, he has a passion for working with fungi.

The biggest job of the last week has been removing the last fence panels and massive amounts of bramble and ivy. Most of the roots are still in the ground, but we mode very short and may just keep going which will allow the grass to develop and grow between. It’s amazing how grass develops in this climate when it is repeatedly cut short, making it spread horizontally into a lawn!

The selection of culinary apple trees on M26 root stock, are from Pennard Plants, who are near here. Chris Smith the owner is building our RHS no dig garden at Hampton Court.

Winter has been long, and spring is rushing in. With no dig it’s such a beautiful method of preparation that takes almost no time, to rake the bed lightly, and remove any weeds including any in the pathways. People sometimes ask if I have cardboard under the woodchip but absolutely never do I use that after year one, when it is for smothering perennial weeds.

I am so disappointed to have lost a lot of broad bean transplants, and it is partly my carelessness. I have been so immersed in writing course material this winter that I have not given quite enough time for a few jobs. We rushed to get these transplants in the ground in December, just before a frost as it happened, and there was not time to put a cover on. Normally I would have waited to transplant them later, but I have been trying to get everything done when I have a gang here, and that’s not always at the right time.

Nonetheless it’s fascinating to see how the most damaged beans are in the three strip trial, on the bed which we fork, while the neighbouring no dig bed has a reasonable survival rate. This is the seventh winter of growing broad beans there.