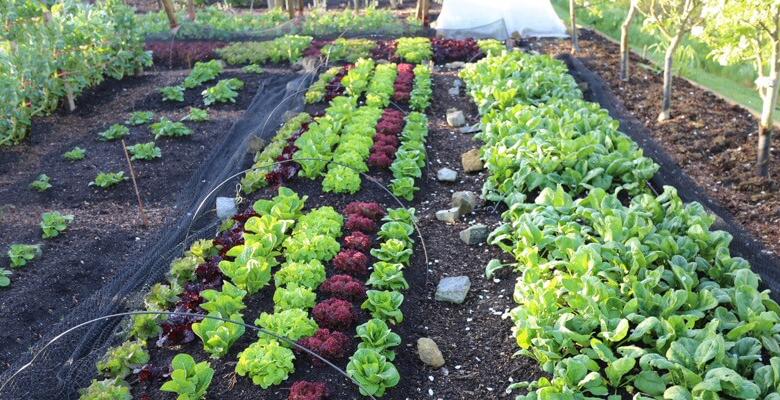 May is proving way sunnier than April, as spring merges into summer. However there are still cool nights – we are forecast a ground frost on 18th. I hope you are enjoying some fine leafy harvests.

Planting continues, a bit of a rush now to get frost tender plants in the ground. We just planted basil & cucumber in the greenhouse & polytunnel, still some tomatoes to go in.

Sow French and runner beans, squash, sweetcorn, cucumbers for outdoors: so many options now. Plant celery and celeriac too.

No dig continues to amaze me with how few weeds grow compared to dug soil. However it does not just happen, we stay on the case, and have already hoed most potential weeds as seedlings of tiny size. It’s very quick: Josh and I spent two hours weeding the 3/4 acre/3000sqm garden last week and half an hour this week. Veg area is a third of that.

In the main dig/no dig trial, the dig bed has problems with some very weak spinach, beetroot and peas, but is doing well with onions.

We were visited by Annabelle of Life at No 27 and this is a blog about her impressions of Bruton and no dig.

In the small garden, explained in this video, weeding takes about five minutes a week, and much of that is keeping edges tidy with a knife or secateurs.

Few other beds are growing weeds now, we just pull any weed seedlings we see, in passing. So the garden is always tidy, attractive and with no possibility of weeds setting seed.

We use mostly posts and polypropylene string, a waste resource from the local stables, from bales of hay and straw. As peas grow, we add more strings. See below for more on using plant roots to anchor strings in the soil: don’t try this with jute though, it will break.

Planting with string as support

For tall plants undercover, we put a knotted string at the bottom of each planting hole. It’s top end is tied to wire above.

How big before you can plant? It depends on the veg, mostly we plant from modules when no bigger than the celeriac below: I planted some already and the rest are going out next week.

I water my seedlings from above, and in the morning, so that leaves are dry by nightfall..

While teaching in Leitrim, I met Patrick McCartney and was thrilled to hear of his no dig success, since 1988 when he saw me with Geoff Hamilton on Gardeners World. His garden looks so gorgeous.

We uncovered most beds on 3rd May as it finally warmed up. It then took little time to pull a few weeds and enjoy the beauty of now-visible plants!

Qualities of seeds & of potting composts

I continue to be puzzled and worried by my West Riding compost. In the last blog I reported on the multipurpose, now in a separate trial we are finding poor growth in the Seed & Cutting, which last year grew superb plants in the 2017 batch.

Also I am disappointed with the unevenness of Poloneza seed from Kings. Two years ago its radish were much more even: this year there is varied colour and shape, with less fine taproots.