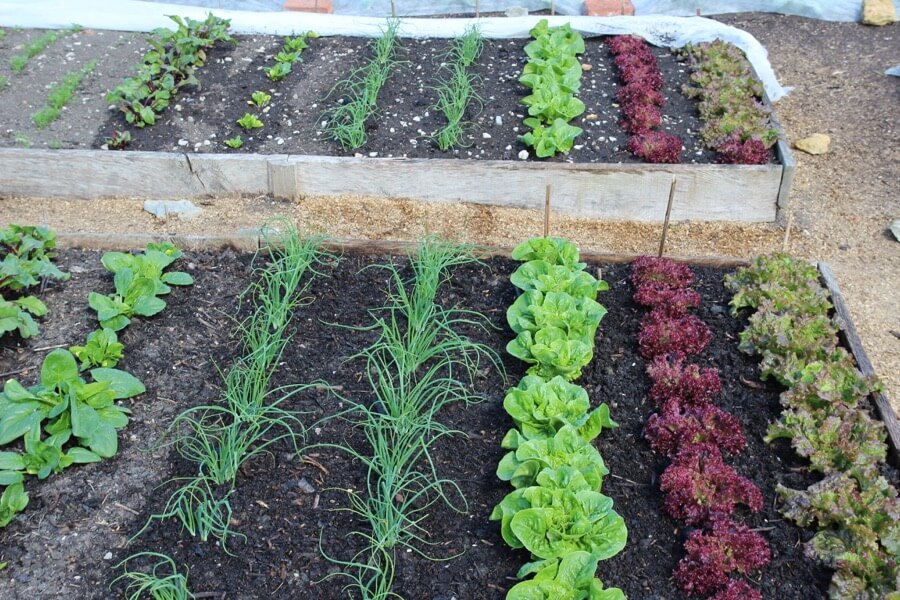 Until the cold final week, April at Homeacres was a good growing month. Temperatures and sunshine hours were slightly above average, while rainfall was a record low amount until 30th, just 7.6mm (0.3 inches) in the month. I am watering salads, spinach, some beetroot as they approach harvest time, and all new plantings.

Water infrequently, and give a good soak. If you are bothered by slugs, best water in the morning so that leaves and the ground surface are dry by evening. You can water in bright sunlight,  and also through fleece, but many fleece covers can come off now as warmth builds, unless they are against pests.

The Gardeners World programme has brought a wonderful upsurge of interest in my ways of growing, and no dig in particular. I was so impressed to hear Monty Don say he is a convert. Also that he said “where possible”, because there are times one needs to dig out woody roots, dig out rocks and plant trees.

I am often asked whether hoeing is “allowed” in no dig. Yes is the answer because one is just skimming an inch’2-3cm though a crumbly surface tilth, which is often compost. Hoeing is a shallow, horizontal job and does not involve hacking into soil. The bed below did not need hoeing, just hand pulling of a few weed seedlings. Currently it’s planted with potatoes.

As a follow up to the programme, I uploaded this video that Edward assembled from filming both before and after the BBC visit, of the bed shown in that film.

I also appeared on Charlie Dimmock’s garden rescue programme on 2th April and if you have a tv license (we don’t, so have not seen it) you can watch it here.

You can buy our new book here and my diary here. The new book has got off to a flying start, already we have done two signing sessions of over a hundred copies. See Steph’s blog about it.

Also I am pleased at sales of the diary since the programme. You can start using it at any time of year, and now is particularly appropriate for timing of all the jobs to come. It’s a perennial diary, for use every year and to help you establish best dates for your plot and location

Saving your own seed requires knowledge of the basic principles, as explained in chapter 11 of our new book, and my articles in the new Permaculture magazines of both the UK and U.S. The photo shows lettuce and onions from home saved seed and I am pleased with their vigour.

I grew the onions for seed in a polytunnel, to keep them dry and reduce mildew on the leaves.

Usually we have a slight frost in mid May, but one never knows, perhaps not this year. I have sown courgettes and sweetcorn in trays on the hotbed, to plant out after mid month. I plan to sow runner and French beans around May 5th-10th, to plant at end May when warmth is more certain.

The frosts of 25th-27th April caused some damage Most affected were potato leaves, apple and strawberry blossom, fig leaves and even some lettuce where they were touching the fleece cover. Apples should be alright because there are still flowers to open.

The three nights of -2C/28F caused most damage to soft new growth, after a long run of mild weather. Worst effects were on plants that caught the strongest early sunshine, for example the Lollo Rossa on the left, east-facing side of the bed.

Potatoes are notoriously prone to damage from even a slight frost, but it’s rarely cold enough in spring for plants to be killed. We should see new growth soon.

As for the fig trees, I am unsure whether the fruits will survive, but they look alright so far. Likewise plums and pears which had already set small fruit. My raspberries look alright, variety Joan J for autumn.

May and October are busy months in polytunnel and greenhouse, clearing and replanting. We clear the winter salads, simply by twisting out plants and leaving most of their roots in the soil. Then we spread compost, and plant summer crops immediately.

My tomatoes are later than they might be because of waiting for salad to finish. In particular the Grenoble Red lettuce, in their eighth month, are still hugely productive. The ones in my polytunnel have thicker leaves and richer colour than those in the greenhouse.

This year we are spreading a mix of about 40% homemade compost, 30& old cow manure and 20% mushroom compost, a balance of my finest composts. I do not feed anything else e.g. no tomato food, and this compost serves for a year of cropping. That saves much time in October, when days are short and salad planting is rushed, and there is no time to spread more compost.

Plants waiting to go out, because of needing more warmth mostly, can be kept growing by moving to larger pots and pushing compost on top. Best results are from two pottings into slightly larger pots, than from one into a much larger pot.

Basil and cucumber specially, do not like sitting in large pots of moist compost, which can cause roots to rot, akin to damping off. Hence my use of vermiculite for basil, which holds air around roots.

Keep your cucumber, melon and basil plants slightly dry. Even peppers and aubergines prefer it on the dry side, but it’s safe to water thoroughly before any hot, sunny days.

No rush to sow runner and French beans, 10th-15th May is good here for sowing undercover, and late May for sowing outdoors.

Also undercover, sow sweetcorn, squash, cucumbers for under cover, basil and courgettes now, if you have not already. Sow Brussels sprouts and cabbage for hearting in autumn, but wait until June before sowing purple sprouting broccoli and kale, unless you want kale in summer. Sow chard, celery and beetroot if you have not already.

Use the Charles Dowding method for

The photos give an idea of when to start picking and how many leaves to remove. You will find the first pick or two more difficult, then it’s easier as plants grow a little taller. Push each leaf you harvest downwards, to detach all of the stalk from the main stem. This means less hiding places for slugs, and makes the next picking easier.

Growth has been faster than usual, and I have already picked over 3kg/7lb. It looks to be a good May, then I shall stop picking in early June to allow the still youthful, four year plants to continue building their roots.

On the path between the beds is all of last year’s top growth which I scythed off in December.

Happiness is early turnips, because these are much sweeter than I have grown before. I think it’s a different type as well as a different variety, from CN Seeds and called CN 7303 F1, salad turnip. I shall sow again in early August for an autumn crop.

More veg for the Hungry Gap

Lettuce are abundant in May, but it’s the leanest month for harvests of most other vegetables. Leeks for example are now rising to flower, so need eating within a week.

These are great vegetables for the hungry gap:

The students on my April weekend intensive course expressed a desire to see Homeacres soil, so I obliged, without enjoying the process. We were interested to see a dense yet crumbly soil, slightly darker and softer at 40cm/16in depth under a four year old bed, compared to under the nearby pasture. We found no worms, it was too dry, but the soil is in aggregated and broke in pieces when rubbed between the fingers. Photos by John Reith.

An itinerary is shaping up, some venues and times still need to be confirmed. Steph is coming too and if you want her for a talk, email her website

30.1 York, possibly an afternoon as well as evening talk

1.2  We visit my son Edward (You Tube films) at Edinburgh, shall celebrate our shared birthday

This is Pete Richardson’s no dig polytunnel at West Mill organics in Oxon.