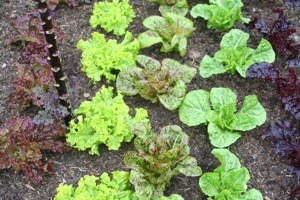 Over the past two months there has been some good sunshine but a lot of cold air and fleece has been hugely beneficial in these conditions, just laid on top of growing plants, as in the case of the beetroot here.

All things seem possible in May – and many of them are. Except for picking lots of vegetables, because May is a month of transition between old crops finishing and new ones maturing, such as those spinach, lettuce, radish, spring onion, spring cabbage and purple sprouting you sowed in autumn, winter or early spring.

These photos of radish were taken on 25th April and show how plants growing in undug, surface composted soil make a faster start in the spring. See also how the dug soil is cracking and has more weeds.

A perennial vegetable to harvest in May is asparagus – so if you like it and don’t have any, make a note to reserve space for some to plant next March. Rhubarb is also in full flow and like asparagus can be cropped until late June, before allowing plants to recover and replenish their roots.

Now is a crucial time of year for keeping on top of weeds, before they grow too big. SO much effort is saved by some gentle hoeing or scuffing of seedlings, rather than letting them grow and having to spend hours in removing them with a trowel. Watch your soil carefully and spring into action when those little cotyledons appear. Keep a hoe handy at all times. And the plot looks nice when always clean.

Rudyard Kipling wrote some precious lines about this, I am sure he was thinking of hoeing chickweed:
“Our England is a garden, and such gardens are not made
By singing ‘Oh how wonderful’ and sitting in the shade”
Or sitting in the car, unless it is to visit one of May’s excellent plant sales, on returning from which the garden can receive a great leap forward when you set out plants rather than seeds.

Is May the end of winter or the beginning of summer? I prefer the latter, half full version and do a lot of summer sowings and plantings in May, but always take precautions too, just in case that last frost happens when courgettes and summer beans are planted out. Fleece is an invaluable help, just laid on top of vulnerable plants, weighted down with a few stones. It keeps cold winds off by day, and conserves warmth by night.
Tender plants to sow in May are courgettes, french and runner beans, cucumber, squashes, sweetcorn – and they should respond well to your care and attention, when kept growing in sufficient warmth. Easy if you have a greenhouse, otherwise wait until mid month, and month’s end for cucumbers. Cover seedlings with fleece or a cloche if you can.

April has been dry and watering may be desirable in May. Give priority to vegetables in full growth such as garlic, spring cabbage and salads. If sowing in dry soil, water the drill or holes before sowing seed, then cover with dry soil: “sow in dust, grow they must”. Roes of seedlings should then be left unwatered until they have at least two true leaves.

In my polytunnels and greenhouses this is changeover month between winter salads and summer fruits such as tomatoes and cucumbers. After clearing the salad plants, I spread a good two inches of well rotted manure and compost. Once the nights are warmer, by about the third week of May, tunnels can also be planted up with melons, peppers, chillies, aubergines and basil. My neighbours will be picking strawberries they planted last autumn, and hoping the badgers leave them alone.

So many vegetables can be sown in May that I will just mention a few that pay for waiting until June! which are french beans (climbing or dwarf), outdoor cucumbers, kale and winter carrots. Sowing kale in June, in trays or a seedbed, allows it to be planted after an earlier harvest of salad or spinach. Beans and cucumber enjoy the extra warmth of June and carrots sown then should miss the spring hatchings of carrot root fly.