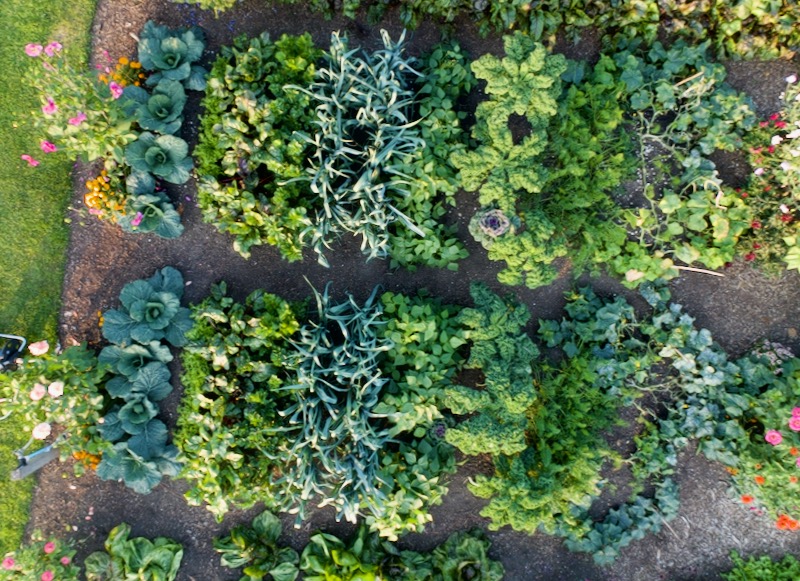 This trial began in 2007 and ran until 2012 at Lower Farm. It’s to compare growth of the same vegetables in a dig bed and a no dig bed, with all harvests recorded. At both Lower Farm and Homeacres, the area trialled was/is the same – 7.5 sqm/80 sqft for each of the dig and no dig beds.

Photos of preparing beds December 2020, then plantings and cropping 2021

The calico cotton strips decomposed hardly at all in the dug soil, suggesting a lack of biological activity. In the surface of the no dig bed they decomposed rapidly, but this does not tell us a huge amount about the soil below because most of the cotton was in the new compost. Jane did another trial in starting October 2021, results to follow.

Above are the first plantings of 2021, whose harvests you can see in the first table below. The next gallery of photographs are second plantings which we put in from mid-June until mid-July, and there were even third plantings of fennel between cucumbers, and Green Frills mustard after the 2nd crop of carrots.

And then I introduced a difference, new plantings in December, straight after the digging and mulching! Compare the second and third photos below to see how much growth happened during December, the time normally of dormancy but this year was unusually mild with the average temperature almost entirely above freezing, and some days above 10C/50F 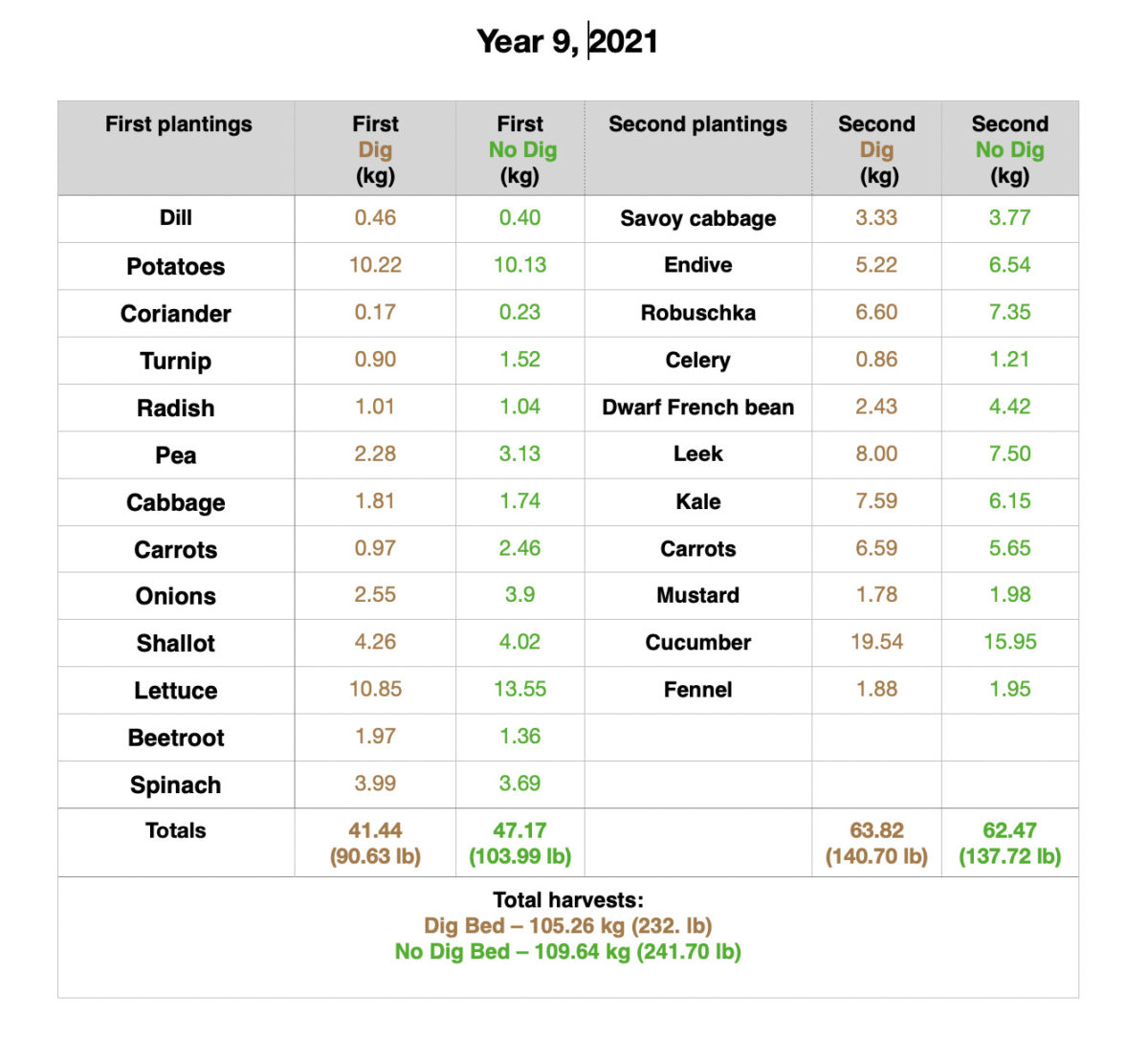 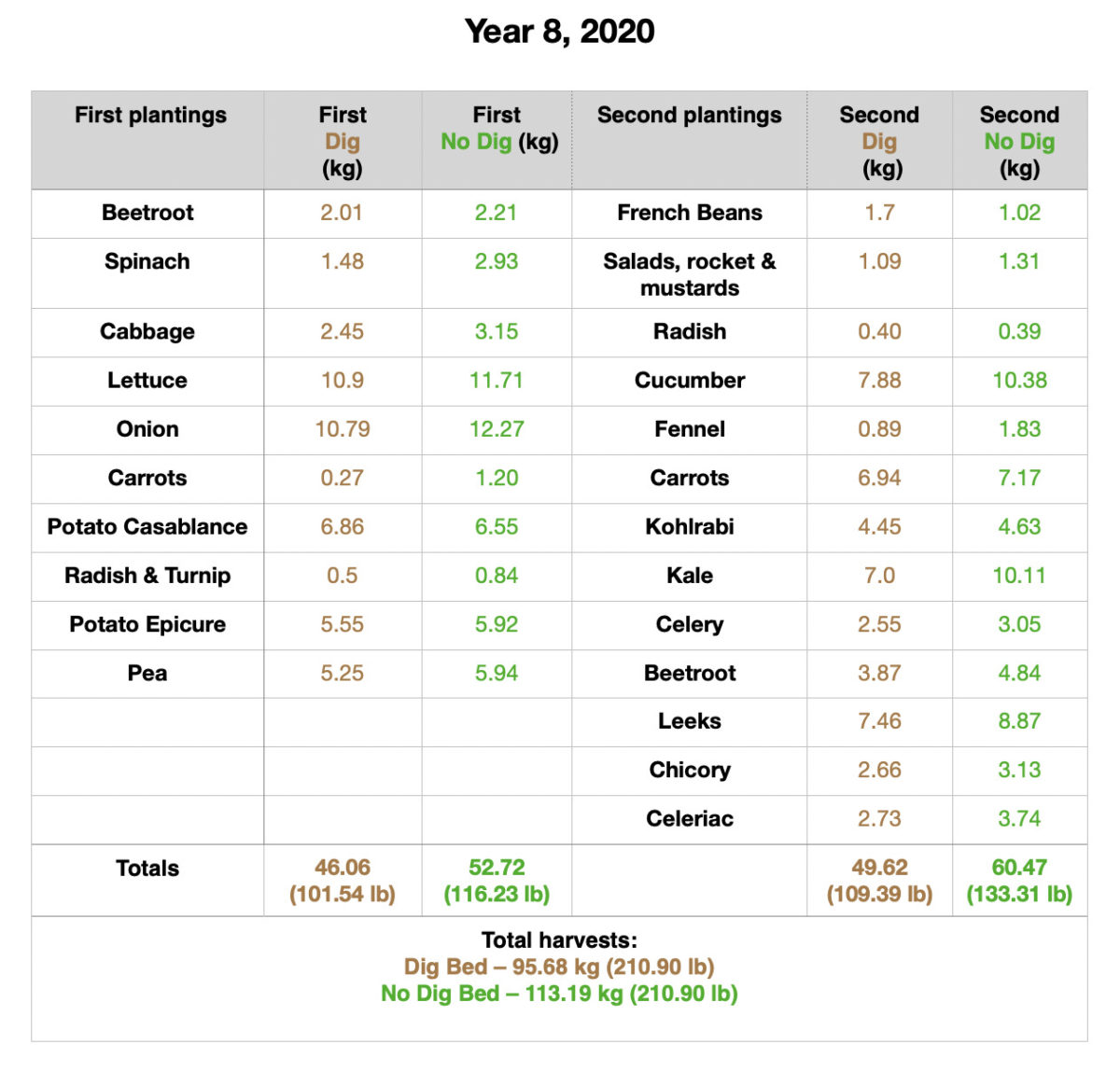 There are charts below, and analysis of the data by a statistician.

This link takes you to the 2019 study of each bed’s soil microbiology.

This is the latest infographic, by Soul Farm UK:

We had a warm, dry spring, a fairly warm summer with some rain, a sunny September then wet in early October. A good year for growing. First plantings were on 13th March, then as usual we laid a fleece cover directly on top.

First harvests were radish and turnip in April, then spinach and lettuce, and cabbage soon after.

Pushing over onion leaves, as in the photo below, serves to ensure thinner necks and better storage of bulbs. They are multisown Sturon and gave 11kg/24lb onions from 14 multisown blocks, sown 7th February and germinated on the windowsill.

Harvests of the first plantings were 46.4kg/93lb from the dig bed, and 52.4kg/105lb from the no dig bed. This shows how you need less compost with no dig, for a similar result. In this case both beds had the same amount of compost, for 12% more harvest without digging.

As in most years previously, growth in late summer and autumn tended to be more equal. Or look more equal, except for the kale. Harvests continue to be higher from the no dig bed. Harvests of second plantings to end August were 13kg dig, and 16kg no dig.

For the seventh time, I dug the dig bed in December and incorporated two large barrows of compost, then simply spread the same on top of no dig.

On 1st April we pulled back the fleece to hoe the dig bed (many tiny weeds) and check progress. All plants sown and planted at the same time.

As last spring (see below), there are problems with the brassicas, beetroot and spinach of dig. Since spring 2018, the dig bed’s growth is weaker than it had been in earlier years, after I first dug the soil from pasture in December 2012.  Yields 2013-17 were just a few % lower but last year was 24% lower, see below.
In the other trial we fork beds and apply compost on top. That reduces yields by less than this method.

By 12th June there is strong growth on both beds, except for dig’s spinach and beetroot. Most harvests are slightly higher on no dig, except for potatoes. Carrots are struggling on both beds and I am unsure why.

Through late summer and autumn, new plantings on the dig bed are stronger than in the spring. Notably the kale. However most harvests continue to be slightly heavier from the no dig bed.

In early December 2019 I cleared the final harvests, the set to and dug the dig bed again, for the eighth time. I spread 1.7 wheelbarrows of nine month old homemade compost on both beds (in trenches of dig), and a little rockdust on each. 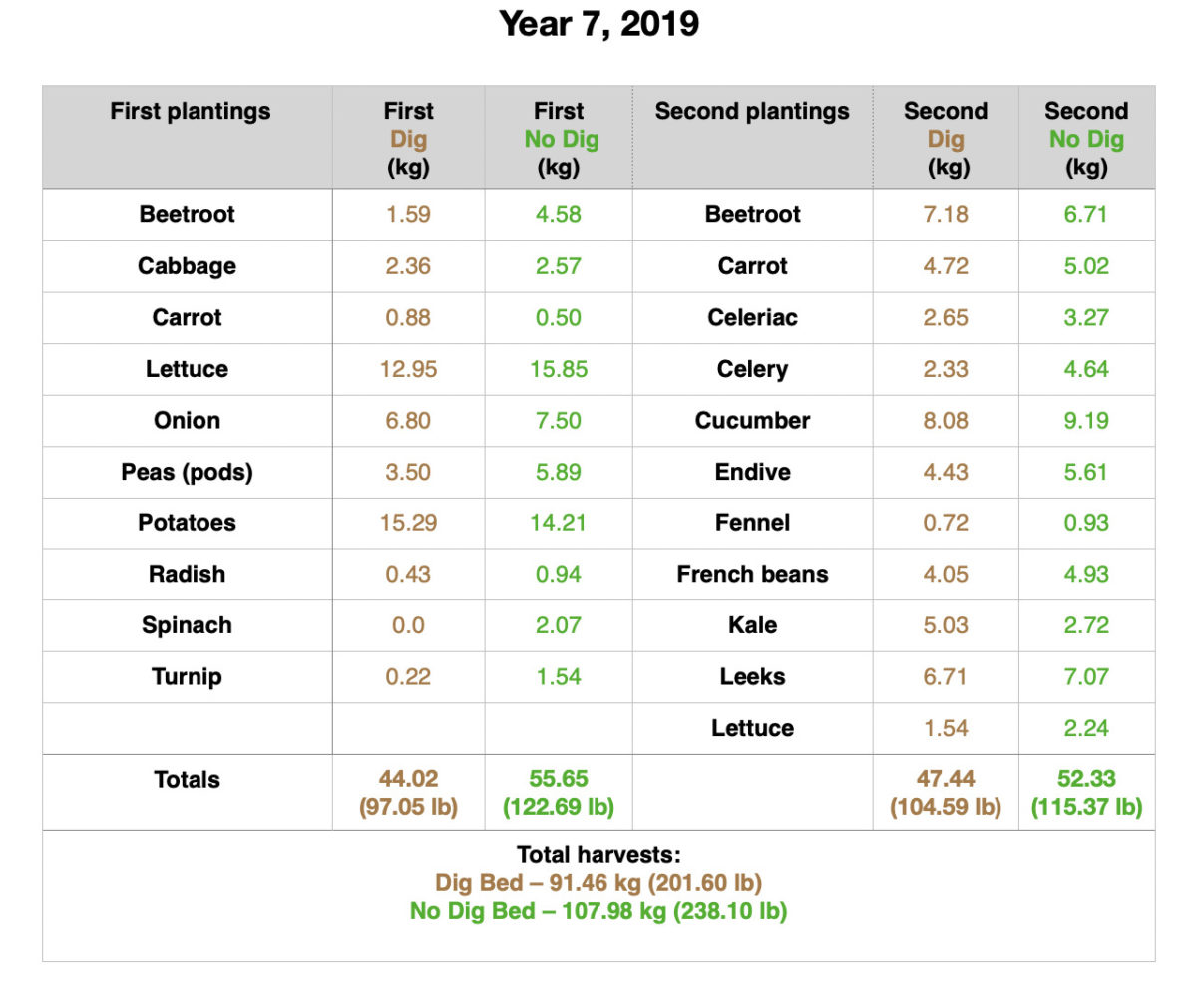 Given the interest in the statistical analysis of the data generated from your dig/no dig trials, I used my scientific background to carried out some analyses and tried to extract as much conclusions as possible from the data you kindly provide us on your website.

For these analyses, I considered that: no soil bias and no plant outliers were present in the datasets. I also considered that for each year the same varieties were used and that the same surface was allocated for each vegetable type.

Indeed, in terms of methodology, as one of your Youtube followers already suggested, the fact that you apparently replicate your bed preparation types at the same place each year (no rotation) can indeed induce biases due to soil heterogeneity. Also, since the areas and numbers of plant individuals used are rather small in each statistical object, the data may be influence by outliers (data that differs significantly and abnormally from other observations in the same statistical object). We can indeed imagine that one of the plants in one statistical object does not thrive well (because of localised pest/disease or germination problem) and thus leads to an underestimation. Ideally, with such small plots, vegetable weights should be taken one plant at a time to allow detecting outliers and count the number of plants. It is of course a lot of work and not always possible. Another issue is the fact that not all year modality levels (2014, 2015, 2016…) refer to the same vegetable types and probably not to the same production surface for each type of vegetable (although I guess that most of the time it is the case). It is thus difficult to understand if the weights measured (in kg) can be considered as yield (kg/m²) and compared from one year to another for a given vegetable type. Also, variety names are not always mentioned in the datasets so it is sometimes difficult to figure out if the comparisons are possible (“carrot” vs “Carrot Nantes”; “Kale” vs “Kale Cavolo Nero” …).

On the other hand, I only analysed the “No Dig Trial 2013-2019” and the “three strip trial 2014-2019” datasets since I had the impression that, in the “lower farm” dataset, not all data were available on your website.

The datasets were analysed using linear models and the software “R” dedicated to statistical analyses.

In overall terms, no significant differences were found between “dig” and “no dig” levels in both analysed trials considering all vegetable types and all years (P>0.05).

No significant differences were found between “dig compost”, “no dig compost” and “no dig manure” modalities (P>0.05) considering the whole dataset.