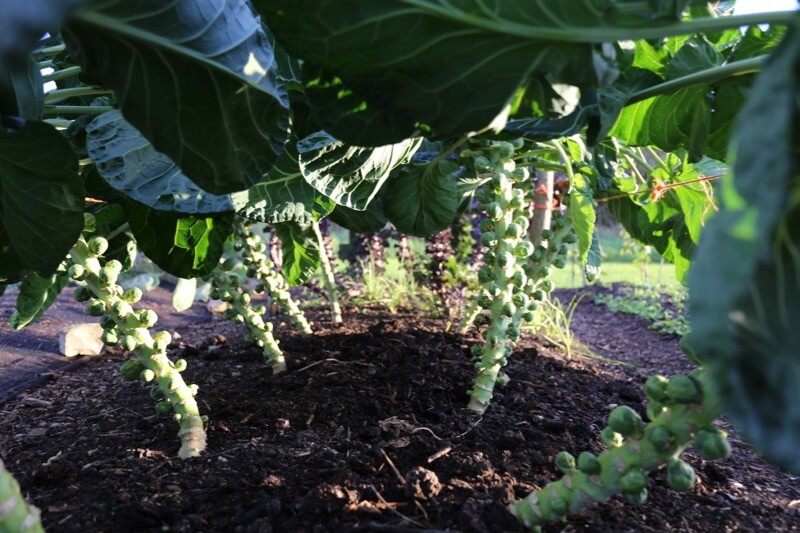 Will it be a cold winter? Too early to say but the vegetables are telling us that winter has arrived.

Some harvests before hard frost

Colder weather looks more likely than in the last four winters over the UK, so have fleece ready and expect lower harvests of winter salads in December onwards. Before any nights below about -4C/25F, harvest hearted cabbage and chicory, beetroot and carrots to store, the video shows them in January after 6 weeks.. I simply put them loose into boxes, sacks or crates, with a little harvest soil/compost on the roots. Keep as cool as possible without freezing significantly.

Veg to stay outside south UK zone 8b, and last sowing

Celeriac, parsnips, leeks, Brussels, savoy cabbage, spinach and kale are fine outside. Some winter salads may survive unprotected, but will crop more if given a cover.

Sow broad beans if you have not already. I dib holes and pop seeds in 3-5cm/1-2in deep, space at 10-15cm/4-6in between plants and 18in/45cm between rows gives space for plants to tiller and for picking. Ideally the seedlings are 5cm/2in tall by the new year, small enough to survive wind and frost, but with plenty of roots.

Job of the season -clear ground and spread compost

Feed soil life, they are expecting it if you have not already. Soil organisms have evolved to find food at the surface, not incorporated which is equivalent to us pushing food into our stomachs without eating it.

Clear crop residues first, twist out larger roots rather than pulling, and hand weed if few weeds or lay cardboard if too many weeds to hand weed.

For veg I spread up to 5cm/2in compost, the finer the better but rougher lumps are possible in autumn, just break them up as much as you can, before spreading. Weather continues the breakdown. This is the only feed I give all year! Saves time.

For flowers, less compost is needed as annual dressing, but it’s still worth using 7-15cm/3-6in for bed creation in year one, see below. If using 15cm/6in you don’t need cardboard and yet we did, I had a surplus.

We are creating a few this winter, after making none last year. Partly it’s for educational purposes, also sales are strong, especially salads and leafy veg, plus the extra beds make more trials possible.

The photos say it all, Bed 1 of 10th October has less compost and no composted cow manure: it was for Croatian television, where the Vrtlarica programme has over half a million viewers, is also on You Tube.

Fill your beds next year!

We have produced a new calendar for 2018, printing tomorrow and available here. Lovely veg and garden photos, monthly advice for no dig and sowing + my selection of top dates, based on both moon and season.

Buy the wall calendar for £1 less direct from the printers ASK calendars.

Thankyou to Mikey Foulerton for great design and organising production. It’s A4 opening to A3 and stapled not wirebound, hangs from punched holes.

For eleven years I have run a trial, to compare growth and harvests of the same vegetables in a dug bed and a no dig bed. I add the same amount of compost to each, as a surface mulch on the no dig bed, and in trenches of 10in/25cm depth in the dig bed.

Digging the one bed requires an extra three hours work, compared to the quicker mulching of no dig. It results in more weeds all season, while the no dig bed is almost weed free after an early hoeing of weed seedlings from the compost. Watering is more difficult on the dig bed because the surface tends to smear and cap, while water soaks easily into the compost.

In 2017, harvest totals (some to come) are currently for 97.7kg dig and 111.1kg no dig. Of the 13.4kg difference, almost two thirds is accounted by cucumbers which cropped 9.83kg more on no dig. Even without that figure, no dig is 5% ahead again. BBC Scotland have come to a similar conclusion at Beechgrove, see below.

Edinburgh talk to Flowers From the Farm

A year ago I had Paula Baxter’s invitation to speak on no dig at this one day event. It sold out with 150 attendees. I loved meeting them and the level of enthusiasm. I loved also the chance to catch up with my son Edward, ace film maker now studying at the university.

Afterwards I received this from Paula: “Thanks so much for coming north and joining in our day – we all really enjoyed your presentation and there are lots of new no-dig flower fields being created across the UK”.

In a similar vein the students at Ireland’s Organic Research Centre comment to the staff after I left  “that everything they learned with us was turned upside down after your day teaching and believe you me that is a great thing.”(Pat Mullan on FB). Most students were 30 years old or less, and I notice how no dig makes such sense to youthful minds that are uncluttered with rules for “best practice”.

However, do read the next two paras!

I appreciate the adventurousness attitude. Here is a piece by Jim McColl who, after five decades of digging, has come to see the benefits of no dig. He likes it for ‘carbon capture and yield potential”.

I shared this photo one Facebook and it is so popular, over 200 shares alone.

I wish I had a photo of the Beechgrove no dig trial, some of you may have seen it on BBC Scotland.

National Trust interest in and practicing no dig

The head gardener Jonny Norton of Mottisfont Abbey near Romsey, Hants booked me to run a training day for any National Trust gardeners who are interested to learn more about no dig. The uptake was large, 30 gardeners for all over S England and the Midlands. Many are older gardeners, attracted to the common sense of no dig, and above all by how it saves time.

Jonny inherited an amazing compost auger when he arrived at Mottisfont and is using it to make rapid compost with top heat of 70C/160F, even in winter.

We laso were shown a parterre where no dig mulching has resulted in a massive reduction of oxalis and celandine tubers, which previously had been dug and double dug, but kept growing back.

I was sent an interesting article about the dilution of U.S. organic standards. Nonetheless organic farming has much to offer, even loosely defined. No till and no dig offer even more health to the environment.

Soon we shall spread a very dilute, thoroughly stirred (with vortices) preparation of horn manure, available to buy here. Most gardens need just one unit for £4.80 plus shipping. Photos are from previous autumns.

I rarely leave fleece on all winter because of wind damage. It’s most useful here for any brief frosty spells such as the -2C/28F we had on 13th November, a one-off frost. I laid two layers of fleece over feel, which is susceptible, and they were fine.

Another bed happened to have celery under some mesh and they were fine too.

Most veg don’t need protection for that small amount of frost, below about -6C/20F things suffer more.

Growth has been steady but is now slowing. We already picked (not cut) 10kg and the plants should mostly keep cropping until spring, with a midwinter lull.

I grow some salad outside under mesh, and spinach even uncovered.

This recent 10min film shows the wonderful autumn harvests which are possible when you sow in summer. For example Medania spinach in early August, still offering lovely leaves as above, unprotected after recent frosts. The leaves become sweeter in winter as pants make sugars for antifreeze!

Last thought on a different way to grow onions, from a video comment

Dora Korbmacher on my You Tube How to Grow Onions

Charles, I found an extraordinary way of planting onions on several YouTube videos in Brazilian Portuguese: You cut the bottom or root part off an onion, about 3/4 of an inch but it can be less, put the root part in water in a small glass, and place it in the fridge until roots appear. You then put that bottom in soil; most of the Brazilian YouTubers did NOT cover the onion bottom with soil, but one did. When I tried it, I didn’t cover the bottom with soil. The bottom then sprouts normal onion leaves, between 2 to 4 sprouts, within a week or two. 4 months later there was no sign of the original onion bottom, but I had 3 fully grown, beautiful onions bulging out of the soil with the leaves toppled over as you described (it was watching your video that told me they were ready, I was waiting for the outer leaves to go brown). They were slightly stuck to each other and I thought the outer skin might be damaged when separating them, but they came apart quite easily without damage. 2 large, 1 fractionally smaller onion. I hung them to dry for a few weeks; I haven’t tasted them yet; but I still can’t believe it worked. Have you (or anyone else) ever seen or tried something like this? I live in Sao Paulo and wonder if this works elsewhere. Amazing!