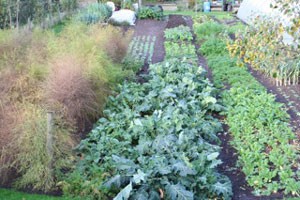 The fine weather of October was a wonderful end to what was, in the balance of things, a really good growing season – in this part of the world at least. But days are now shorter, cooler and wetter – winter is not far away.

What about putting the garden to bed for winter? This idea crops up in many places and is, I feel, the worst posssible appoach, unless you live in a region of continental cold. Here in Britain there are many mild interludes through the winter months when growth continues and when we can continue as well, with great benefit to the garden, as well as to our health.

Think of the winter months as a time for being out there as much as possible, creating foundations of successful growth in the rest of the year. Use this quieter time as an opportunity to be on top of any weed problems which continue nagging you, to build fertility and also to plan for next year, based on what happened this year.

In theory, you can do a plan for next year’s cropping from the comfort of your desk, but I find it much easier to compose plans for the year t come when actually out there, doing something and seeing the lie of the land and imagining how it would look. While harvesting crops this autumn, think about what will grow there next year.

Above all, imagine the vegetable plot as YOU would like it and not as some supposed authority tells you. I despair of seeing so much misguided advice in the media (‘now is time to dig – or even better, double dig’) and find I am often correcting wrong advice such as “we were told that you should not put manure on top of the soil”. I shall deal with the origins and reasons for some of these misunderstandings in next month’s piece.

Suffice to say for now, my golden rule of soil management is to improve LIFE in the soil by disturbing it little and feeding it a lot. This means zero cultivations of any kind – no digging, rotovating or manure incorporating – and an annual dressing of compost or rotted animal manure on top, between 1 and two inches (3-5cm) thick. I use no other fertilising additions and do not, for example, liquid feed tomatoes in the polytunnels.

For really poor soil, such as sand or yellow clay, a thicker dressing of organic matter will be beneficial, if you can find or buy enough compost. If not, you could double up the available compost on a smaller area and sow a long term green manure such as grass and clover on the rest.

Should you have a lot of weeds, they can be covered with the compost and then have a light excluding mulch placed on top, such as cardboard or black polythene. However, this is really a one-off and should not be necessary if you got the soil clean last year, and have then been on top of weeds throughout the season. I do no mulching, once soil is clean of grass and perennials, and have seen amazingly little weed growth this autumn, yet I am careful to pull out any weeds I see to keep soil really clean, and I continue with very occasional weeding throughout the winter.

Another winter job is to break up any larger lumps of compost and manure after some frost and weathering has softened them up. I seize any spare moments of dry weather in February and March to knock the occasional lumpy surfaces with a manure fork or rake. The surface layer turns into a soft tilth which is then ready for sowing and planting from March onwards.

As I write this in late October, my garden is still three quarters full of all kinds of vegetables, so November will see a lot of harvesting of parsnips, celeriac, carrots, beetroot, turnips, swedes, leeks, bulb fennel and salad leaves.

Outdoor salad is continuing well in the mild weather – there are beautiful hearts of radicchio and scarole endive, some less beautiful ones of chinese cabbage, plenty of oriental leaves including some gorgeous Red Frills mustard, just a few lettuce leaves and plenty of chervil and parsley. We are also picking a few indoor leaves as the recently planted salads start to grow, although woodlice have caused some damage to tender young plants around the tunnel edges.

For later harvests, savoy cabbage, purple sprouting and spring cabbage are growing bigger all the time and should provide some greens in winter and spring. For summer harvests, garlic is planted and some broad beans are in – sow Aquadulce Claudia as soon as possible if you want early broad beans next year.

Salad on sale at:
Spar, The Organic Shop, The Olive Bowl and Churchbridge Stores, all in Bruton
Oates and Musson and Lush, both in Castle Cary

And on menus at:
The Montague Inn, Shepton Montague
The Chapel, Bruton
Oates and Musson, Castle Cary
Pilgrims Rest, Lovington