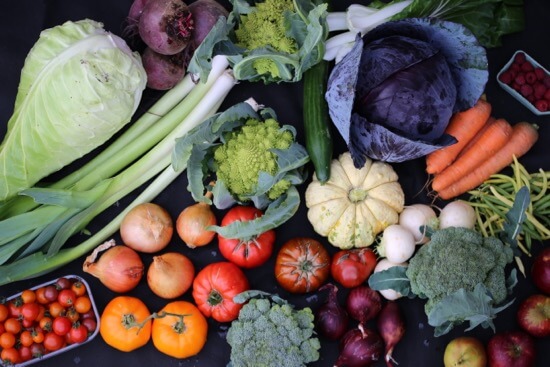 Vegetables and apples are maturing ahead of normal. This makes some harvests for winter storage more difficult, such as hearted cabbages that are already fully developed and need cutting, in the warmth of mid autumn. At least roots can be gathered at the usual, later times.

October is a month for planting salads and leafy veg undercover, to crop until next spring. The only sowing I recommend this month is garlic. Wait until November to sow broad beans.

Check the video link to see some results of my question, how necessary is rotation? Fourth and fifth year harvests suggest that healthy soil and the weather are as or more important. Climbing beans in the same place for a fifth year are as prolific as ever, leeks and cabbage look good in their fourth year, broad bean and potato harvests were good. Filderkraut hearts weigh 3kg each.

Also in the video is a comparison of growth in forked and no dig beds: the latter give more yield, for less effort. See dig/no dig beds below as well.

On this pdf, scroll halfway down to see the results so far in 2017. It’s admirable they are doing this, and I love how an initial scepticism for no dig has turned to enthusiasm. Likewise Tim Allen (Darina’s husband) at Ballymaloe Cookery School in Ireland, acknowledges how doubtful he was about no dig, until he saw the labour saving potential of having so few weeds!

In my dig/no dig experiment here of two beds, there are extraordinary differences at the moment, especially of recently planted brassicas and chervil. On the dug bed they look unenthusiastic, on no dig the leaves are abundant and glowing. Harvests to date are 10% higher from the no dig bed, full results published in December.

No dig is wonderful for needing less tools, just a few of good quality. We fashion dibbers from spade handles, which are long and therefore save bending, so planting is quicker and easy.

Copper tools are more expensive but a joy to use, save energy and disrupt soil less, in every sense.

Veg gardening is even more joyful when you have some flowers too. They are companions for me as much as for the food plants, and when having lunch recently in the conservatory, we loved watching goldfinches eating seeds (I think) of some Verbena bonariensis.

If you are considering buying a polytunnel, see my advice here and save some money, perhaps problems too.

October is one of the two main changeover times for under cover cropping, as summer crops finish and winter veg go in. We do no soil preparation or feeding, just watering before planting. Usually the soil is dry by early autumn, especially under the non-watered tomato plants.

These are more popular than ever, do check the new dates for 2018: more to come soon. Day courses are an opportunity to see no dig in practice, to hear me explain it, and to ask questions. Then to eat Steph’s colourful and delicious interpretation of all the flavours on offer at that season.

Weekend courses have time to go more deeply into best methods, with a look at the economics and  practicalities of selling produce as well. Average group size is twelve to fourteen.

Harvests are coming ready now, though if many leaves are still green on squash plants, wait as long as you can. Slight frosts do not harm the fruit, but may kill the leaves, in which case it’s best to pick either just before or after an early frost.

Mildew on leaves is a good sign of impending maturity.

Harvest dates vary with variety, but a rule of thumb is that when a few without pest holes start dropping, best gather the rest. Pests such as codling moth make apples ripen earlier, so the first fallers do not mean all apples are ripe.

Harvests in these photos are in date order of sowing or planting. Raspberries planted June 2017 (potted), leeks sown 6th April, celery sown 3rd May, turnips sown 8th September, to overwinter as small plants (we shall see…).

These grow so fast when sown in summer, their best season of sowing, and they are all second crops. If you like the photos, make a note for next year to sow Romanesco broccoli early to mid June, calabrese third week June and kohlrabi early July. Or a week earlier further north.

I was worried that my runner and borlotti beans were too green in early September, but a lot of pods have yellowed recently, and we have made harvests of nearly 4kg Czar beans so far, shelled weight but still damp. Pick when pods are half yellow or brown, shell beans into a tray with air movement, then keep dry and warm until they are hard, for storing in jars until needed.

My helpers have been great for preparing cabbage as Sauerkraut, even we had a German farmer Anna who kindly chopped some. Her tips are “as fine as possible in chopping, rub just a little salt for at least five minutes until liquid is coming out”. Finn and I chopped some too and packed it into jars, so all the cabbage is submerged in its own liquid. Now the jars are in darkness under the stairs, fermenting at room temperature, anaerobically. After 4-6 weeks I shall move them to the cooler shed.