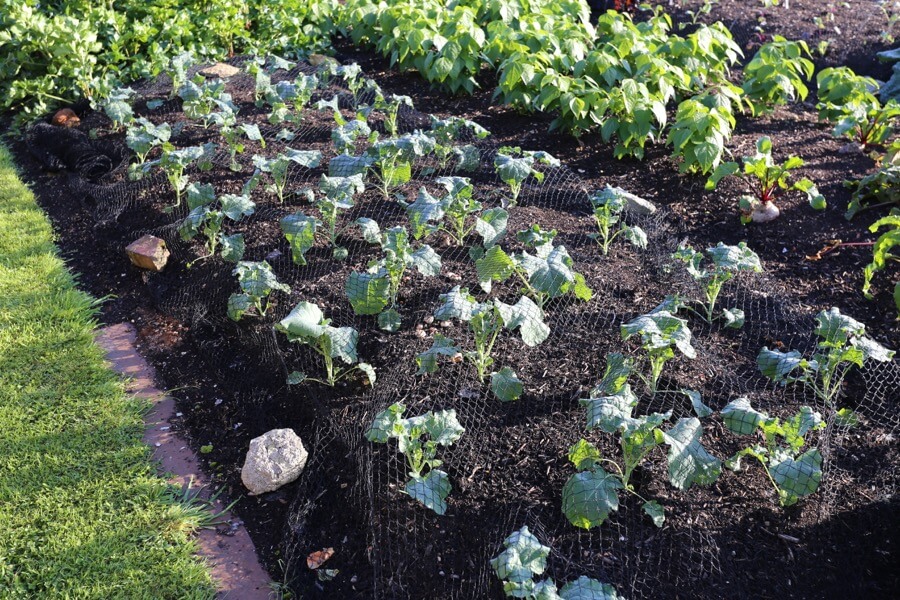 The weather has been difficult but manageable, apart from damage to climbing beans. Leafy crops have enjoyed the rain and lack of sun more than fruiting ones.

However September’s second half looks quiet and perhaps warmer, as often happens. It’s time to make last salad sowings, and some exciting harvests.

You need to know your pests:

I find useful protection from anti-bird netting which lasts many years: it’s quick to lay over and then remove for weeding or picking. The other main product is white mesh: a 2.1m width works for most veg or 3.6m for tall crops like carrots at the moment, against root fly. Fleece is more fragile and best for weather protection. The link is to 30gsm grade, worth the extra money compared to 17gsm which often serves for one use only.

It’s late now for spring greens, kale, spinach and spring onions, just possible in areas with mild winters. However plants will be smaller in winter and more prone to pest damage. Autumn salads such as mizuna, lambs lettuce and mustards are sometimes worthwhile from sowing mid September.

However the main sowings now are for salads to grow undercover: the main ones here are Grenoble Red lettuce, endive, Medania spinach, mustards, claytonia, land cress and chervil. Steph’s blog has tips on sowing and harvesting, see this one on what to sow for winter and when.

Running out of space

I find the garden is crammed full in late summer, more than at any other time, so where to put new plantings? Interplanting helps such as spinach, rocket and mustards between lettuce that are approaching their final few weeks of picking.

This week, after clearing carrots and spreading compost, we popped in chervil and coriander where I plan to plant garlic in October. The herbs will give some autumn leaves, may survive winter and give leaves in the early spring as well, all without bothering (perhaps helping) the slow-to-start garlic. In early May I shall twist out any remaining herbs.

When you sow in summer, at specific times, the results happen quickly. For example turnips in seven weeks from sowing to golf ball size.

2 Veg for autumn and early winter

Slightly slower to grow are chicories for hearts, sown mid June to mid July, for cropping September to November or later. This red cabbage was sown in May, leeks in April, and all the veg in the garden photo are second crops, apart from parsnips and asparagus.

Purple sprouting broccoli is a great standby for spring. I tried sowing it even later than usual, but think that my late June sowing looks a little small… so mid June is perhaps last call, for big plants.

Celeriac needs sowing in March to look like these roots which will store until April, by which time the asparagus will be cropping again.

Readiness for harvest is shown by leaves dying and the squash stems going first yellow then brown. If you want to store winter squash but harvest when the stem is still juicy, put them somewhere very warm (24-30C/75-85F) so the skins harden and moisture sweats out.

Do read Rhys Jaggar’s blog, growing on 50m2 in London. He is achieving large and regular harvests, in particular by looking after and improving his soil. See Your No Dig Gardens and send some photos of before and after if you wish to be included on that page.

My dig/no dig experiments at Homeacres and Lower Farm show that vegetables mostly grow more strongly and healthily on the no dig beds, for less effort and time needed. In the comparison of two beds 5x16ft/1,5x5m, the no dig bed needs 4 hours less time per year than the dug bed.

The quality of harvests is sometimes different, for example the root vegetables from undug soil come out cleaner, and I see less slug damage to the no dig vegetables.

Another trial in it’s fifth year is three strips 6.5x29ft/2x9m with identical veg. The six small beds of one strip (on left in photo) have their soil forked 11in/27cm deep every winter, akin to broad forking. Yields are generally lower every year after the forking; full results to follow. I suspect it’s because of the damage to soil’s fungal network.

Since mid August there has been a lot of blight happening. Spores are always in the air at this time of year, they just need wet leaves to land on. However they can survive only on living tissue, so it’s safe to compost blighted debris even in cold compost heaps, except for potatoes which may partly survive.

My polytunnel tomatoes are much afflicted, but the greenhouse tomatoes are fine, and outdoors the Res, Primabella etc are still cropping nicely, see previous post.

This crazy melon tasted delicious, although the skin is think!

Apples are ripening so early, I worry that they won’t store so well. My best hope is Jonathan, a small red apple, and the trusty Red Windsor too. I hope the Jonathan will stay unripe until October, currently they are unripe/sharp and holding on.

For those who buy plants from Delfland nurseries I have a photo of the owners Jill and John, and Jill’s father who was curious to see how no dig works. He is 89 and had thought of ditching his spade, but after seeing the crops and methods at Homeacres, he is fired up to continue. Maybe he will still ditch his spade, not to mention fork.

The amazing benefits of no dig, no till