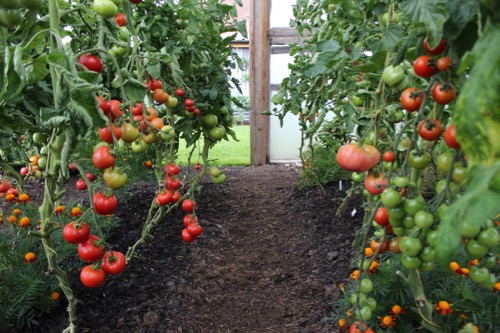 The second half of August was wet and humid here, perfect for weeds to germinate in the summer warmth. So what happened here? Almost none germinated on my undug beds, just a few around the plot edges where there is no compost mulch. By contrast, many new weeds have germinated on the dug bed of my experiment.

I have a bed of leeks which I covered with mesh in June and the cover stayed on for two months without needing any weeding at all, the photo shows how it looked when I removed the mesh, temporarily, there are perhaps still some leek moths flying.

Perennial weeds are different and keep growing unless you have managed to starve their roots of food, either by repeated removal of new growth, or by light deprivation with compost or polythene mulch, see next section. Homeacres beds were full of perennial weeds in early 2013, now there are none except for a little weak bindweed.

Warmth and humidity bring this on, so keeping leaves dry is the main remedy. Outdoor tomatoes are extremely difficult to ripen in wet summers and once blight is established, it often kills plants before tomatoes can ripen.

Its one of many reasons why polytunnels are so useful.  I have only a very few leaves affected, and I remove them to compost (its safe to compost blighted leaves, fruits and roots). I am careful in damp, summer weather to water at soil level only, and to have no leaves touching the polythene.

No late blight on Sarpo potatoes

I had a good harvest of Sarpo Mira potatoes on August 29th, helped by course participants, and there was no blight on their leaves. These potatoes grew on land reclaimed from weedy pasture with a 6in (15cm) compost mulch in December 2014, then polythene over the top in April when I planted the potatoes through slits in the polythene. All weeds are gone, including couch grass, but there is still field bindweed. Straight after harvesting the potatoes on August 29th, we planted mustards for autumn salad leaves. If I should have more of these leaves than needed, they make a good green manure.

Incidentally Sarpo potatoes will continue to grow through September and can be massive by October – but they risk becoming dry and starchy. Its reckoned that best flavour comes from harvesting now. They are tender, floury and taste good to me. Yield was equivalent to Charlotte but their top growth is unruly and spreads outward on long stems.

Its a privilege to meet gardeners and growers from such varied backgrounds, all with a tale to tell and I learn a lot! On the recent weekend course Kevin Mascharenas brought his camera too (Samsung mirrorless) and a selection is below.

Kevin is helping to set up some vegetable growing near Spitsbergen, nearly 80 degrees north, where the trees are 2 inches high! Ambitious to say the least, and they are buying a geodesic dome. Currently they are only beginning http://polarpermaculture.com

Salads for autumn and winter

Either you need to be planting outside now, from sowings made in the first half of August. I have final plantings to make of land cress, salad rocket, mustards and spinach. Also you can sow lambs lettuce outside asap.

Or sow seeds now, in modules, to plant undercover in October. In cooler areas sow asap. Here its milder and I sow mostly in the second week of September. I already sowed wild rocket and land cress because their seedlings are slow growing. See sowing timeline for details of what to sow now.

In late summer, lettuce always suffer from grey root aphids, but this year it has been worse than usual, perhaps because of dry weather in early summer. Whatever, once they keel over there is no remedy and I do not know hoe to prevent it either. Young plants resist the aphids better so sowings in early July are reasonably reliable for August and September lettuce.

Another remedy is to eat less lettuce at this time, by sowing endive and chicory in early summer.

I am always tempted to sow mustards and salad rocket in July, but have learnt hard lessons over the years that these July sowings suffer a lot of flea beetle damage in August, and often flower in September – so its better to sow in early August, for cropping September onwards.

Reduce habitat as much as possible, so they have nowhere to hide by day. Keep edges tidy and as short as possible, have few weeds and remove lower leaves of vegetables as soon as they show any yellow. I do this mainly for Brussels sprouts, cabbage and broccoli. I was impressed to find several snails hiding under a yellowing leaf of sea holly.

Its a great time to turn a heap if you have finished one since the spring. I was lucky that Kevin was keen to do it! He reckoned the contents smelt a little anaerobic, for me that is normal at this stage and I find that the air introduced by turning sorts it out, being sure to break up any soggy lumps.

During the course we checked the temperatures of different heaps, with my foot-long thermometer,  and I was surprised that the mushroom compost heap which I purchased a month ago, is still 45C. My current heap is 65C a foot in at the top, and still 50C on the edge near ground level, where it was filled three weeks ago, thanks to a decent proportion of green and brown, about two thirds to one third.

Sweetcorn at Steph’s no dig allotment, how grown, how to see if cobs are ready