The history of no dig pioneers

It would be fascinating to know the full human history of not working soil. Here are three gardeners who enjoyed amazing results, but were only on the fringes of mainstream gardening and farming.

In the 1940s, gardeners practicing no dig in the UK included Arthur Guest, a miner from Yorkshire, in his sixties by then. His results were so good that he kept winning prizes at horticultural shows. Then he wrote a book that sold worldwide, and he became a BBC presenter late in life, espousing what he called ‘natural gardening’, and not being a ‘slave to the spade’.

Guest had used to dig in a ‘traditional’ way. After adopting no dig, he wrote that he used 40% less compost, thanks to soil organisms being healthier and compost being used to ‘maximum advantage’ on the surface.

Guest’s small book has been reprinted by the UK seed firm Marshalls, and it’s a great read if you ever find a copy. As well as compost from his own garden and some horse manure, he used a fair amount of sawdust mulch. One amazing statement is: ‘I had club root fairly badly, but compost treatment cured this in two years’.

King was  head gardener at Levens Hall in Cumbria, UK, for three decades. He visited many gardens and had the resources to trial no dig in the 1940s. His books are full of good ideas – they include, ‘Gardening with Compost’ and ‘The Weed Problem, a New Approach’ (both Faber & Faber, 1951). The quotes below are from the latter.

‘These and many similar results which I have witnessed confirm my opinion that less digging means fewer pests and diseases.’ (p83)

‘At the approach of spring, the difference between my dug and undug plots is truly remarkable… the undug portions of the garden are always infinitely drier and in better condition for planting or sowing than are the plots that have been dug (which) often resemble a quagmire.’ (p85)

‘The general conclusions I have drawn after many years of patient investigation of the value of no-digging are:

Like Guest, King answers the question I am often asked about the supposed ‘extra compost needed for no dig’.

‘Garden soils are more often over-cultivated then under-cultivated. Even in the palmiest days of horticulture this was true, and the credit for the abundant production of days gone by should rightly be given to the large quantity of organic matter that most gardens received. Regular cultivation without an adequate supply of organic matter, is likely to upset the natural balance between mineral and organic matter because cultivation must increase the rate of decomposition of the organic matter in soil while affecting the mineral content very little. [Therefore] the less we dig, the longer will our supply of humus last.’ (pp 76-7)

A contemporary of King was William Shewell Cooper, described by Val Bourne in the Oxford Times of 18th November 2010:

‘He founded the Good Gardeners Association (4,000 members in the 1950s) and was a founding member of the Soil Association in 1946. His garden, at Arkley Manor near Barnet, attracted 10,000 visitors a year and he travelled the world explaining organic gardening. Recently I came across his son Ramsay while in conversation with a modern exponent of no-dig gardening — Charles Dowding. Ramsay still practises no-dig gardening and he has a demonstration plot at Capel Manor College in Enfield. The picture shows them both.

‘Modern gardeners could do with more of this practical wisdom, instead of the celebrity-led television that seems to impart little.’

Arkley Manor had to be sold to pay taxes when Shewell Cooper died. The GGA continued but declined and then died in 2015, perhaps from confusion over what it stood for. Shewell Cooper for some reason did not use the phrase ‘no dig’ to describe his association, perhaps showing what an ‘unsexy’ phrase it was at that time, with little interest in soil apart from as a ‘bank for nutrients’.

I enjoyed conversing with Ramsay, still gardening at 80 years old. 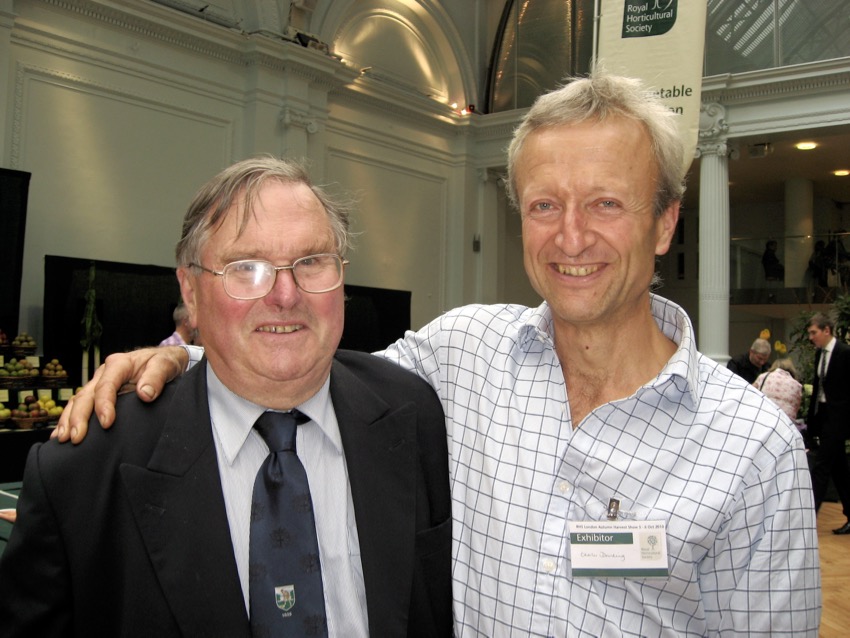 10 thoughts on “The history of no dig pioneers”

Spring Sowings – Sowing and planting into surface compost outside