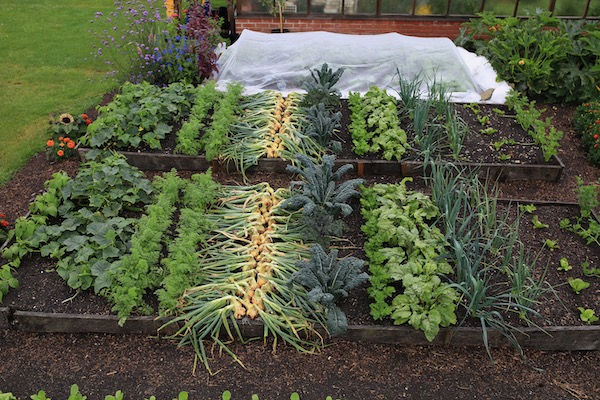 For subsequent years of this ongoing trial, see 2019-21 page

I made two large beds, five feet wide and sixteen feet long (1.5x5m), the same area as Lower Farm’s experiment, and used old oak planks from a tree at Lower Farm which I had had to cut down in 2003, as it was dying.

The planks are ten inches (25cm) wide so the beds are deeper than before, and more level thanks to the lack of slope at Homeacres.

These figures are after the FINAL HARVESTS on December 4th.

Excellent quality through October and November of celery, fennel, endive and beetroot, in the mild weather: look at the productivity of endive, from just 14 plants on each bed, planted after the magnificent onion harvest, picked every ten days of outer leaves, with harvests from 2nd September to 29th November.

I have not added the cucumber harvest to the main totals because it would distort the figures: there was a vole in the dug bed which ate the cucumber plant! 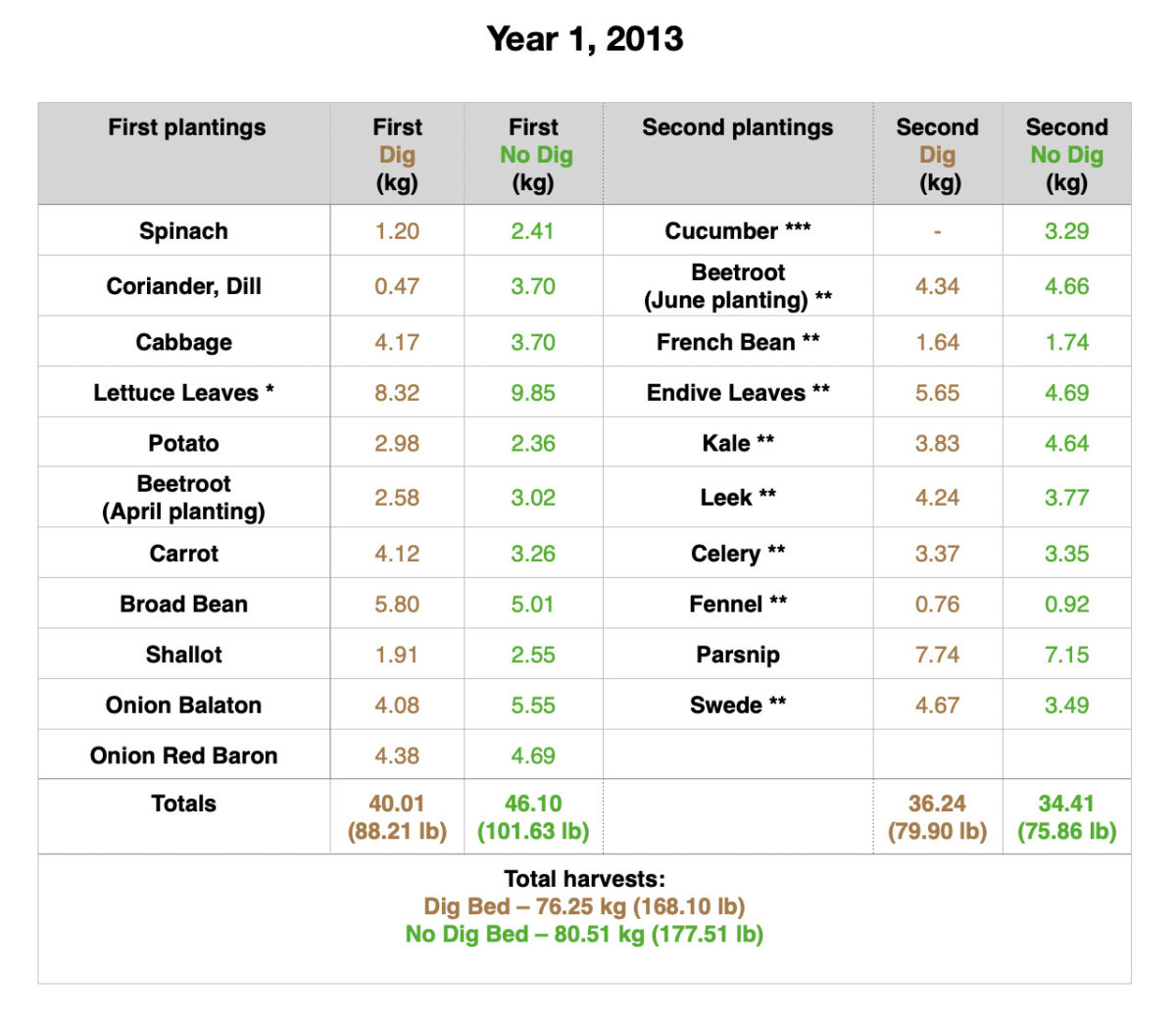 * 22 plants on each bed, picked every week from May 13th to July 23rd
** 2nd planting
*** I have not added the cucumber harvest to the main totals because it would distort the figures: there was a vole in the dug bed which ate the cucumber plant!

Module raised plants from the greenhouse, not hardened off as they are covered immediately with fleece, they include lettuce, cabbage, beetroot and onion (small, on right), and the right hand photo is both beds planted and ready to fleece over on March 9th.

Sowings and plantings 2014 with spacings between rows

Image below is mid July, garlic harvested and followed with golden beetroot, new celeriac, cabbage followed by French bean, broad beans at far end followed by swede and kale, hidden behind the parsnips which are on the large side. Dug bed on left, undug on right.

By the end of July, many changes have happened again. Golden beetroot are well established where the garlic was. Onions are now drying in the greenhouse and I have planted beetroot and endive where they were. Lettuce are almost finished and the French beans have grown enormous in no time; they were planted after the cabbage harvest.

These figures are after the final harvests on December 4th. First harvests were in May. 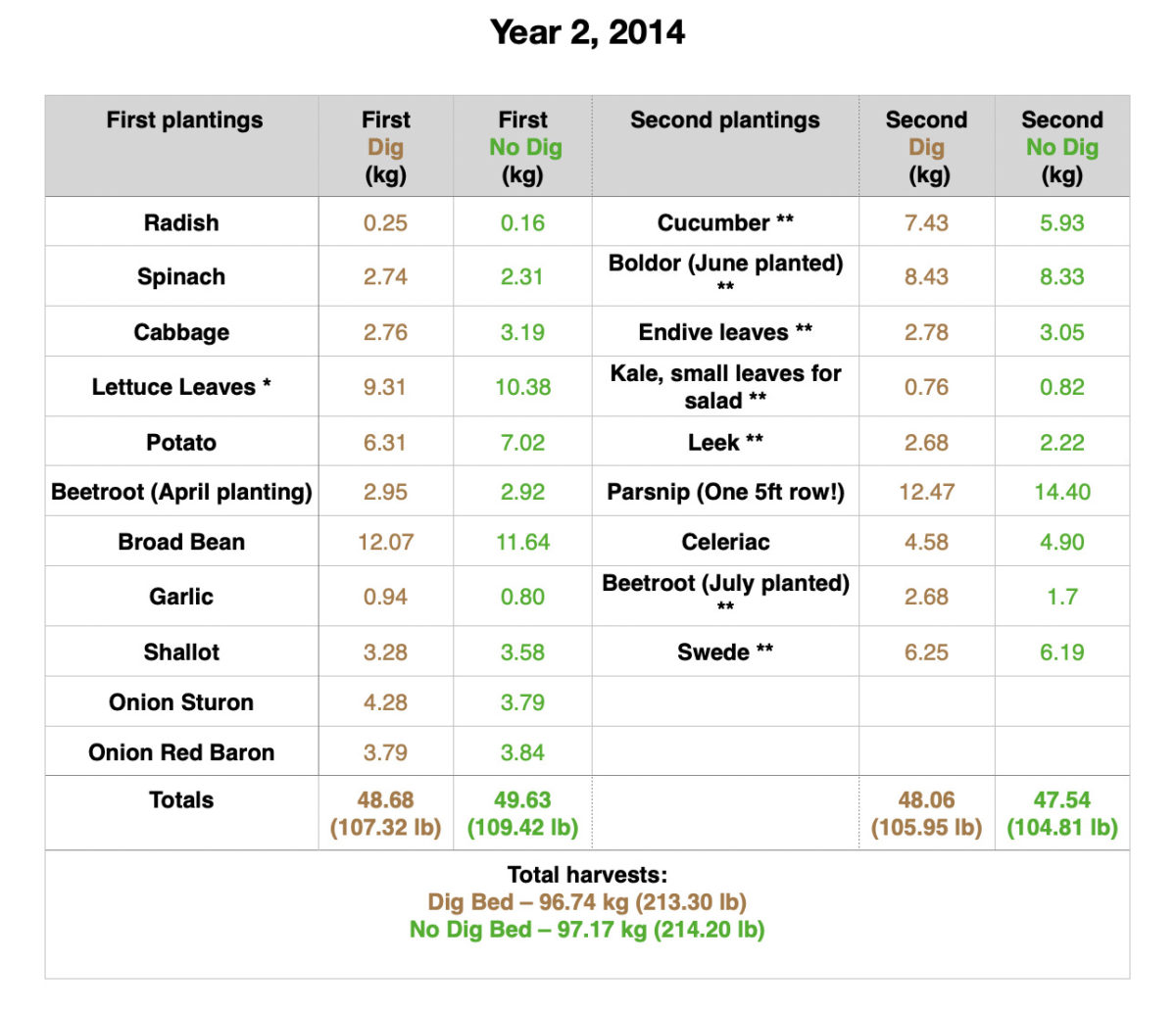 * 22 plants on each bed, picked every week from May to July

As of mid-September, both beds look full and productive but the dug bed’s crops now look slightly stronger

As of mid-October, crops look quite similar and gaps are now appearing adter the leek and carrot harvests.

By early November, the only harvests to make are red beetroot, celeriac, swede and salad kale.

By 4th December, the last kale is harvested and its time to to dig the dug bed, back to top for 2015.

Preparing the two beds for 2015

Through March I plant and sow, the same vegetables as last year, in different places.

I removed fleece off both beds on April 12th. Growth is steady on both beds: broad beans look stronger on the dug bed while lettuce, spinach and radish are bigger on the undug bed.  There have been many more weeds to hoe and pull on the dug bed!

I harvested some spinach and the radish in mid April, then we took a first pick of lettuce on April 21st, see the before and after photos, the yield was 880g of leaves from the dug bed and 1400g from the undug bed, whose leaves were noticeably firmer and larger.

In May the growth has been steady on both beds, nice weather. Cabbage look better on dug, potatoes look better on undug, as do spinach and lettuce, see photos below. Harvests to May 27th of spinach are 2.8kg dug, 3.1kg undug and of lettuce are 5.4kg dug, 7.1kg undug.

August update   Both beds are now replanted with vegetables for summer, autumn and winter harvests, see table below. Already I have harvested some cucumbers (Tanya) which I planted after the lovely harvest of cabbage hearts in early June. We just laid mesh over the carrots, against root fly. French beans and the second planting of beetroot started cropping in mid August, photos are at that time. 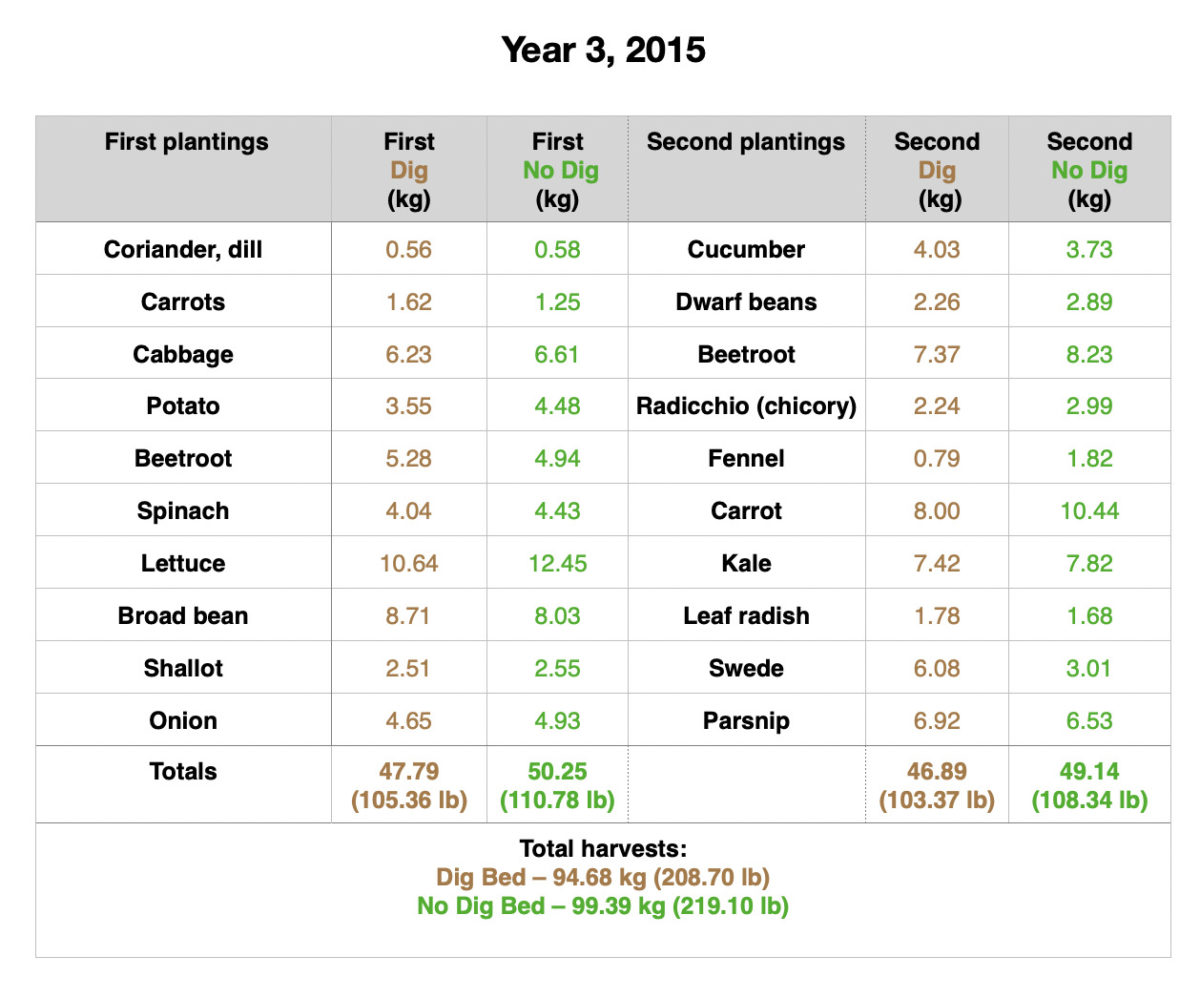 First sowings and plantings on March 14th, 2016 of carrot, parsnip (both sown direct) and spinach, onion,  broad bean put in as plants

By March 21st, the beds are planted and sown, then fleeced over as its still cool with some frost and cold winds.

Now its wait and see what grows.

We finally removed the fleece covers on May 3rd and then growth took off in the new warmth, what a joy. By mid July, each bed has given just over 40kg of harvests with the dug bed slightly ahead thanks to higher harvests of lettuce, peas and potatoes, while no dig is ahead on carrots, cabbage and spinach.

Harvests and new plantings up to early August

Many summer harvests have finished, so there are now carrots growing where the lettuce were, endives after onion/shallot, kale and cabbage after beetroot, cucumber after spinach, French bean after cabbage and swede/kohlrabi after potatoes.

Autumn harvests were higher on no dig. It was a dry period and perhaps this reflects better moisture availability, from the higher numbers of mycorrhizal fungi.

Plus there was more canker on the dug bed’s parsnips, and more rotting of it’s swedes. Kale intrigued me too, the plants always looking more lush on no dig. During a gale in October, the kale on dug leaned over, those on no dig stood upright. 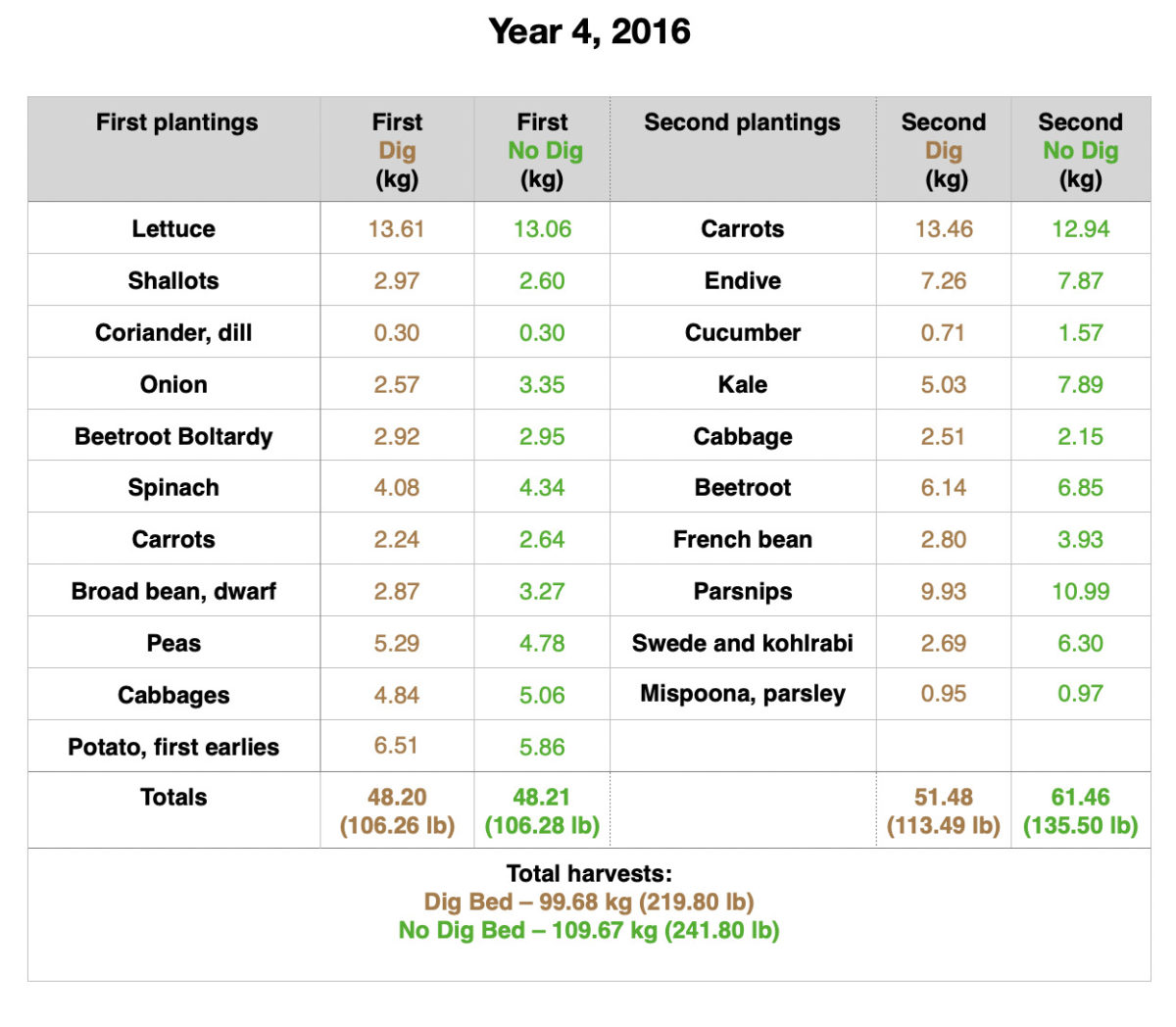 See this video of spreading compost on the no dig bed, it’s a quick job. By comparison the digging of the other bed took longer!

On 13th March 2017, after some unusually mild weather with day maxima averaging 12C/54F, we sowed and planted both beds, with the same veg as last March, see below. The planting pattern is a mirror image of 2016, for a rotation of sorts, for example lettuce and potatoes swapped ends.

On 30th March, I removed the fleece covers, just for an hour, to check on growth. It was similar between both beds but a huge difference was the high number of weeds germinating on the dug bed, and very few on the no dig.

Growth through spring was steady, in temperatures mostly above average, with a last frost on 27th April of -2C/28F. Normally we have a frost mid May but not this year: May was almost the warmest ever, especially by night. See the results on this video.

There were strange differences with spinach, beetroot and onions struggling on the dug bed, while healthy on no dig. At the other end, peas and potatoes grew larger on the dug bed, harvests still to come. The images below are 1st June 2017, harvests to that date of 11.5kg dug, 15.1kg no dig:

By mid July, all first plantings are harvested, except for onions (soon) and parsnips. It’s a vintage year for onions here, with plenty of dry weather.
There were more potatoes and peas from the dug bed. Legumes generally yield a little more from tilled soil, while potatoes vary each year: in 2017 it was 11.07kg dug and 8.56kg no dig. Total harvests to 13th July are 37.65kg dug and 41.91kg no dig.

The beds were next planted with beetroot, French bean, kale, cucumber, radicchio and celery. Plus I sowed carrots between the lettuce, for October harvest.

The plantings we did on the day course of July 1st – chicory, celery and golden beetroot, small plants – grew fantastically in just six weeks and there were hearts of radicchio by 18th August.

Harvests of first plantings were 48kg dug and 54 kg no dig. Through August, we picked cucumber, French beans and beetroot, of the second plantings.

2017 harvests from both beds 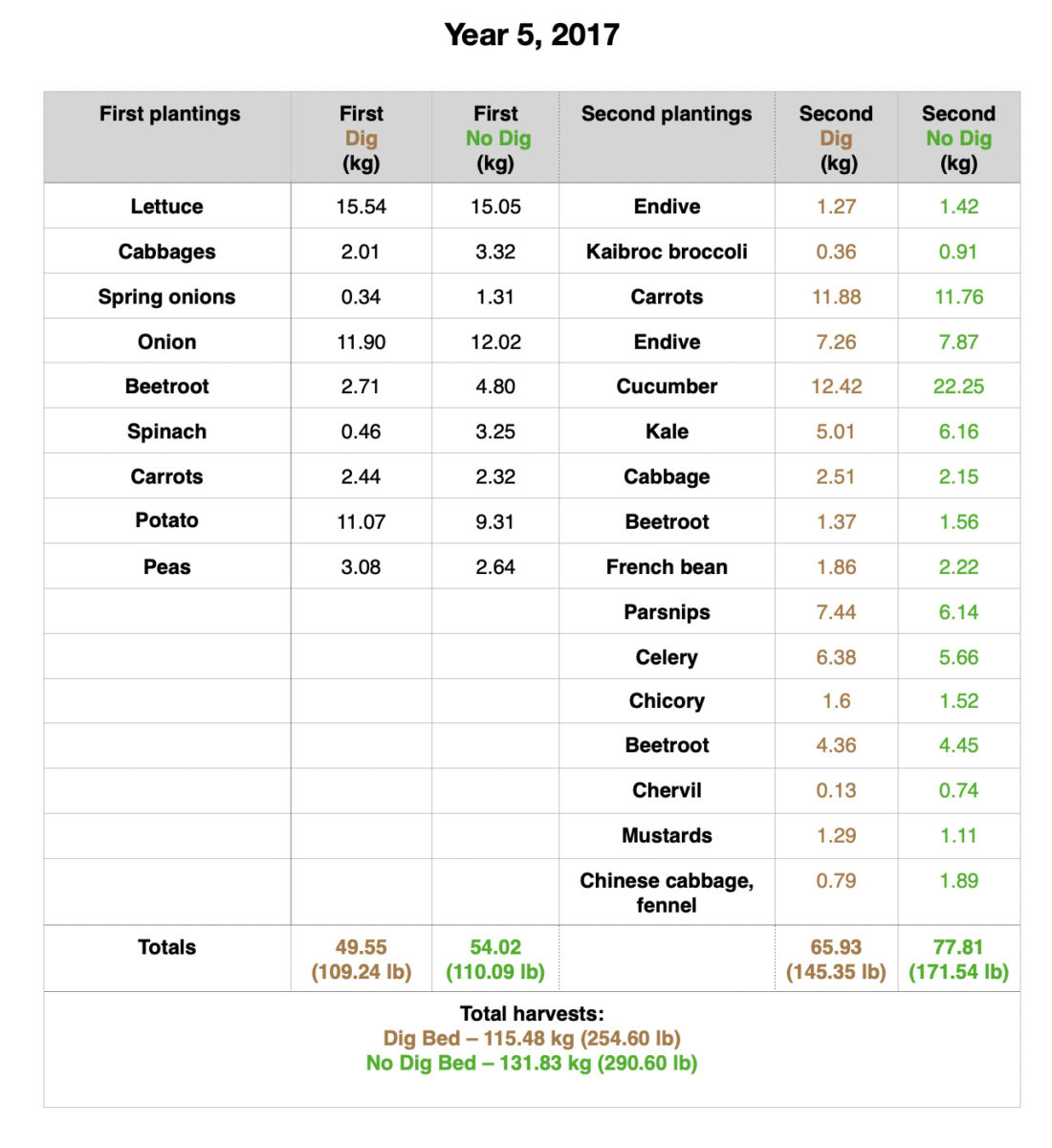 December 2017 saw me on the dig bed’s sixth digging, with compost incorporated, and I spread the same amount of compost on top of the no dig bed. I used mostly horse manure from the greenhouse hotbed, which we had turned/moved out in May. This heap had been hot enough to kill the huge amount of grass and other weed seeds.

In early March there were weeds germinating on the dig bed and I hoed lightly, then again in late March. On the no dig bed there were hardly any weeds, thanks to the hot composting. Then on Easter Saturday 31st March, I planted and covered both beds. Before that, in wet conditions where we could not hoe, she hand weeded both beds and found quite a difference in number of weeds, see photo.

Growth in spring 2018 showed more difference than ever before. The only things to grow better after digging were weeds and potatoes, perhaps onions though the harvest still awaits as I write this on 18th July.
Look at the differences between peas, spinach, beetroot, carrots, lettuce, cabbage and kohlrabi: all much stronger on no dig. Less pest damage on no dig as well – carrots were eaten by slugs on dig, and cabbage by wireworm.

During June and July we replant as soon as harvests are taken, so there will be a lot of second harvests in late summer and autumn. Already I picked the first cucumber, planted after potatoes. Biggest harvests so far are lettuce (9.42kg dig, 12.50kg no dig) and potatoes (15.79kg dig, 13.84kg no dig).

By 6th October the dig bed appears, to some extent. to be repairing it’s soil. The June plantings of beetroot for example, are much stronger than the March ones.

However there are still bizarre anomalies. Celeriac on the dig bed looks good, but the celery next to it is measly and pale, half the size of celery on the no dig bed. Leeks and kale are smaller, carrots much shorter than on the no dig bed.

Looking ahead to the rest of autumn, there is still a lot to harvest!

Now it’s 20th November and most harvests are taken. The only one which saw more from the dig bed was celeriac, 4.23kg trimmed compared to 3.78kg trimmed from no dig. This is probably because the nearby peas were much more vigorous on no dig, and slowed the growth of newly planted celeriac in late May and June.

The leek harvest was 2.42kg dig bed and 3.82kg no dig, second crop after peas, seven modules of two leeks each.
Kaibroc broccoli is a third crop after potatoes then cucumber, up to mid November it gave 1.12kg dig and 1.31kg no dig, then we took a final harvest on 6th December. It would have continued to grow… but the dig bed needed digging! (which I did on 10th December). Incidentally, with no dig you can prepare ground for the coming year simply by mulching around existing winter vegetables if the spacing is wide enough, such as broccoli, leeks and kale: not salads! 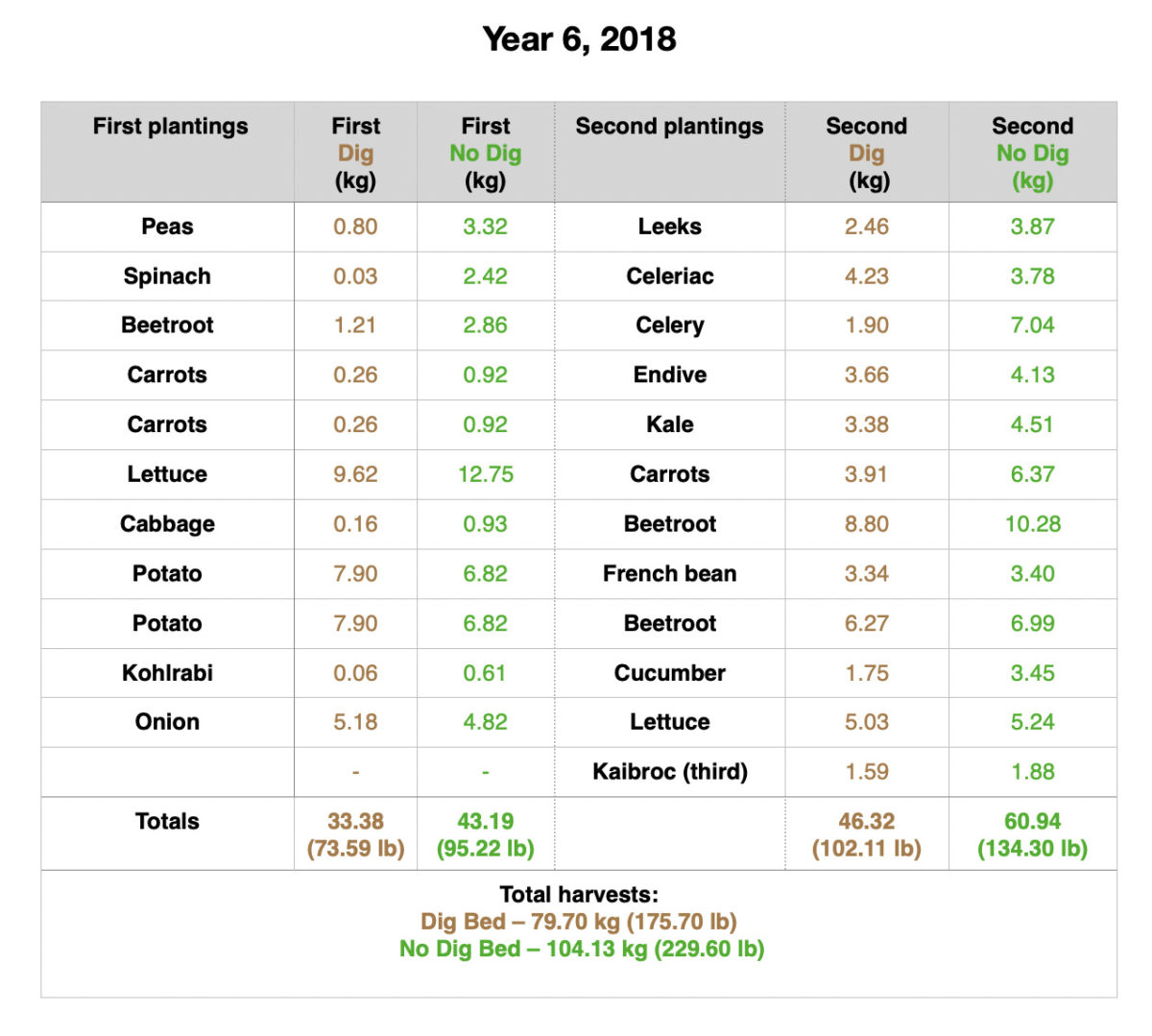