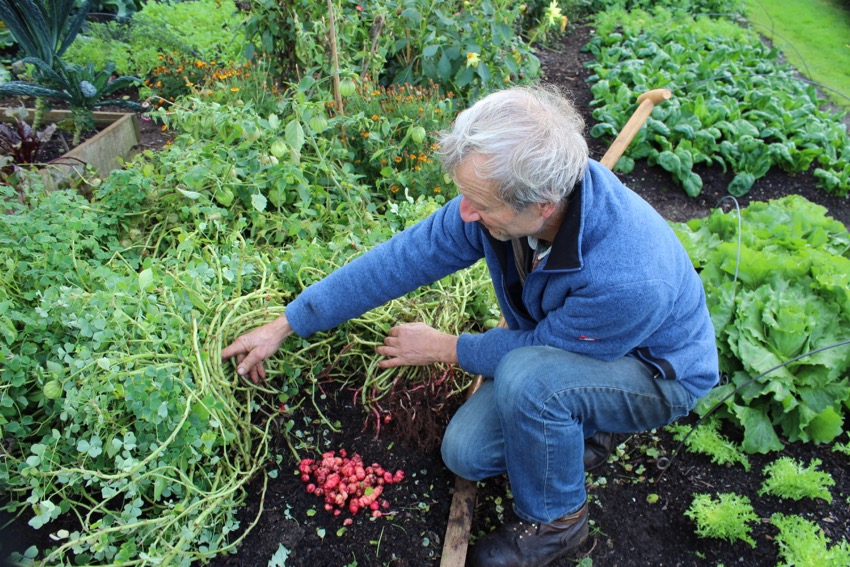 As so often, unusual weather means unusual growth. Here the first half of November has been exceptionally mild, around 3C (5F) above average and no frost yet. We are picking better quality salad leaves outdoors than in October, and new plantings undercover are now picking too. However their leaves are thin, because of the lack of light.

Outdoors I have pickable leaves on a speculative planting of mustards made in mid October, and lambs lettuce planted 14th October (sown greenhouse early September) is also coming ready. See the forum post on lambs lettuce, it never grows as large as lettuce.

All the vegetables in these pictures were sown in modules undercover, and are second crops after summer harvests. I add no more compost when planting in summer.

Feed your soil, when you have any clear space after finishing harvests. I find that spreading enough compost to cover the surface is good for growth throughout the year to come, including second crops in summer and autumn. Its about two inches (5cm) in  depth. On infertile soils where growth has been poor this year, I would double that, perhaps using less decomposed materials as a lower layer, then finer compost on top to plant into. This greater depth will also smother weeds whereas a two inch layer does not, unless they are tiny – therefore I weed before spreading compost, and its a quick job because undug soil grows less weeds than dug soil, which I notice every year on my experiment.

You can also spread compost underneath autumn and winter veg, for example the calabrese in this picture, also kale and broccoli.

It could be -2 to -4C by Sunday morning 22nd, especially in the north of Britain. Perhaps cold enough to damage above-ground beetroot, though not celeriac or parsnip. So I plan to harvest most beetroot by Saturday, then put them in crates or sacks in the house lean-to, with some soil left on. Carrots are going to be borderline for frost, but at this time of year there is little benefit to leaving them in the ground, where slugs may be nibbling them.

Also this week I shall harvest remaining Czar beans to pod out, and Chinese cabbage and chicory hearts (not the more open plants), again to store in boxes undercover. I use them for salad leaves until Christmas, and they are also delicious roasted which is one of Steph’s favourite recipes.

We harvested the first oca, and they are still smaller than I hope for. Its a balance between letting them grow, and harvesting before the mice eat them! Until the first proper frost, the tubers are still swelling, as with dahlias and mashua which I look forward to tasting. Most reports on mashua’s flavour are not encouraging but the little red flowers are delicious. Sadly my plant blew down and all its little flowers got eaten by something on the ground.

Yacon harvests have been good and soon I want to harvest dahlia tubers. I have not eaten them before and Sarah Coates, who gave me the seed, posted a promising recipe.

For serious quantities of food, its hard to beat the staples and I just harvested over 60kg celeriac from eight square metres of bed and path, equals 30 tonnes per acre.

Even better than that, vegetable leaves give huge numbers of meals because of repeat picking – the Medania spinach pictured should continue cropping until next June, and it was sown August 8th.

Some questions arose out of a recent course, about clearing ground of difficult weeds and what you can grow while couch grass, bindweed etc are dying off. In the area photographed I laid a sheet of polythene on top of compost (manure is compost when decomposed):

Q1. How much manure did you use under the sheet?

I spread average between 2-6 in(5-15cm) and growth was good for all depths but the 6in application left a thicker, darker surface residue. I spread it in December, then by March there were weeds (buttercup etc) growing through so I decided to lay polythene over the top.

We planted squash and courgettes late May, through holes in the polythene and into the compost, normal depth.

Q3. Similar to squash, I think I read somewhere on your blog that you also did something similar for potatoes.  I’m assuming you ‘earthed’ them up with compost, then applied the sheet, then cut the sheet to make room for the sprouting spud?

I sowed potato tubers in April through small holes in the polythene, under the compost and on top of the ground: there was no more to do until harvest because the combination of compost and polythene is enough to keep light off almost all the tubers.

Out and about, in Ireland

I gave two day-courses at the Organic Centre in Leitrim, north east of Sligo. It has great facilities and a lot of good growing, with many more vegetables than at Ryton, and they have eight polytunnels to alleviate the windy Atlantic climate. Hans and Gaby Wieland run things in a productive way and also have the community involved, for example people can use beds for growing in return for raising plants that the Centre sell locally, to raise funds. They are finding that Klassman organic compost gives good results.

Before returning home, Steph and I visited Galway, a beautiful city, then on the way to Knock airport we called in at Oisin Kenny’s. His parents and aunt are farmers so Oisin helps with the livestock, while his main passion is growing, and he had a 7x30m polytunnel erected in the field near his parent’s house. He does not live on site but a builder friend PJ helped him to convert a container into office and storage/washing facilities, also a Ford Transit into a mobile shop; its ingenious.

Oisin came on a course here in 2013 and has put the knowledge to good use, mulching with different composts for excellent growth and few weeds. He said they rarely bother weeding now, just removing any they see while planting, picking and clearing. No dig with a compost mulch is working so well on his sticky soil and his mobile shop gives him great options for selling to restaurants in Galway. With the help of one employee Wayne and some wwoofers, he also makes up little bags of flowers to sell. Next phase is erection of a large greenhouse, it will be huge.

Out and about, in London

We met many enthusiastic gardeners at the RHS “Secret Sunday” show on November 1st. Many had come especially for my talk and although the acoustics left something to be desired, it was good to be there and chat about growing.

Next year this event is not running and sadly we have decided that its replacement show, a whole weekend just before Christmas, is not viable for what we do and sell. I expect that some other London events will crop up.

There is still time to strike cuttings from side-shoots about 2in long. Keep them frost free all winter, and they will grow quite fast once rooted. I remove flowering trusses and if plants grow thin and tall, you can cut off at least the top half of their stems so they make a new growing point from a side-shoot, and this gives you a sturdier plant.

It all takes time and its probably cheaper to buy seed, but this is a way of propagating hybrid tomato varieties, and having slightly earlier crops in June.