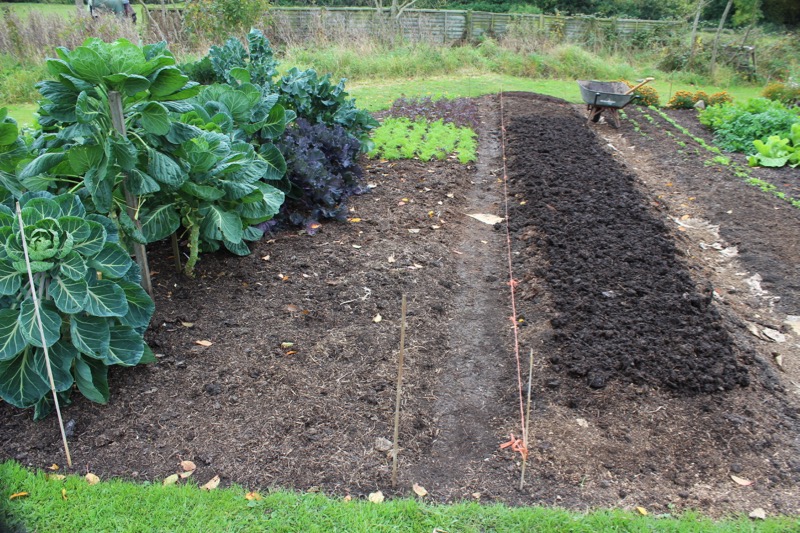 Growth continues! Even though days are as short as February, the southerly winds are bringing warmth to grow leaves and swell roots – the mean temperature this past week, night and day, has been 11.5C (53F).

However in this warmth, root vegetables don’t store so well. I am leaving celeriac, beetroot and some carrots in the ground until later in November or even December. Just watch for pests if you do this, for example slugs eating carrots is reason to pull them.

For leaves, the quality of new growth is affected by the lack of light – outdoor salad for example, especially lettuce. Whereas endive, chicory, salad rocket and spinach are growing healthily

Over the last three years at Homeacres I have tried many shapes, widths and heights of beds and feel happier with those I have raised by adding a little soil in their base. This can be either imported from elsewhere or from scraping a thin layer of topsoil off what becomes the pathway, putting this soil onto what becomes a slightly raised bed. This gives a clearer definition of where beds and paths are, compared to when you make beds with compost/organic matter only, which condenses to a much thinner layer, volume wise, as it is absorbed into the soil.

Last week I was fortunate to receive a knock on the door from a couple in the village who are remaking their garden, and wanted to empty two raised beds full of topsoil. They delivered it too, and I am using this soil for raising the base of some new beds as you can see. It is where I had mulched since December 2014 with compost and polythene, growing squash and potatoes.

I receive fabulous feedback from gardens adopting a no dig approach and its nice to have the chance to explain it more as in November’s issues of Gardeners World and Gardens Illustrated magazines, also Steph is in Permaculture this month, on crop protection. No dig saves so much time and effort to achieve wonderful results.

Homeacres this season has seen abundant harvests and the dig/no dig experiments are again showing how the extra work of digging and cultivating is not rewarded with increase of crops or quality of growth, sometimes the opposite in fact.

Once your plot is clear of perennial weeds, you can easily sow, plant and replant into the surface, which stays clearer of weeds then if soil is cultivated. In my garden of three quarters of an acre, I do most of the basic maintenance, with weeding as one of the least time-consuming jobs. I need extra help for other jobs especially making all the harvests which is much more exciting than weeding.

And we eat well here, there is so much choice of vegetables, Steph turns a great range of then into food  for course lunches. Why not give a course voucher to a gardening friend for Christmas?

Its almost finished for the year although you can sow garlic and broad beans in modules or small pots for transplanting, say if the ground is not ready for direct sowing, or if you think mice may eat the broad (fava) bean seeds.

For garlic I find it simplest to sow direct and sometimes I pop cloves into dibbed holes between salads or other vegetables which are to finish soon. In the greenhouse I have sown garlic in a line up the middle bed, to grow between my winter salad plants, this worked well last year.

In the UK, sow broad beans asap if you are in the north, by early December in the south; plants want to be just a small size by Christmas, not too tall which would make them vulnerable to wind and frost. Likewise its good to have just medium rather than large overwintering cabbage and onion plants, see the photo.

If you have been following my tips here, I hope you have some of these wonderful vegetables. Having said that, I am in Somerset and its milder than other areas, in fact we have had only a slight frost so far, not enough to damage the heads of calabrese or Florence fennel for example. Whereas many vegetables survive frost such as kale, leeks, cabbages that are not tight hearted and chicories.

No dig means you can ignore many supposed rules, such as “you should not walk on beds”. So in the polytunnel, after pulling the substantial tomato plants on October 14th, we found it good to walk on the surface compost both to level and break up any lumps, before watering and planting salads for winter.

Using compost as surface mulch saves time because it holds food over a long period, until plants need it. So in the polytunnel I add compost just once a year, in May before planting summer vegetables. I do not feed or fertilise at all, saving time and money. And I add nor more compost or other food before planting salads in October, which grow healthily until flowering in April. The biggest time saver is that that weeds are few and far between, mostly needing just an occasional tweak of the odd small weed seedling while picking.

Deciding what to grow

Its fun to try new things, but they don’t always work! To be sure of having a worthwhile harvest, its good to grow enough of the reliable staples. For example I find that Uchiki Kuri squash gives lots of ripe fruits every year, compared to the later ripening Butternut – but if I was in a warmer area I would grow some of the latter. Sweet potatoes do not thrive outdoors in this climate, but yacon does.

We had a great visit from photographer Walter Lewis who is creating an exhibition and book on Regenerative Growing and Farming. He came to Homeacres after finding that “every visit I make in the past seven months entails mention of you and your thinking”. Here is a sample of some photos he took on a wet morning in September.

There is still just time to plant a container for salad leaves to pick from February to April. I suggest buying plants rather than sowing, although you can sow some fast-growing ones now such as leaf radish, mizuna and peas for shoots. I planted the boxes below on October 1st, from sowings on September 9th, and am taking them to the RHS show in London on November 1st. They are filled with multipurpose compost after lining with newspaper, and have been in the greenhouse.