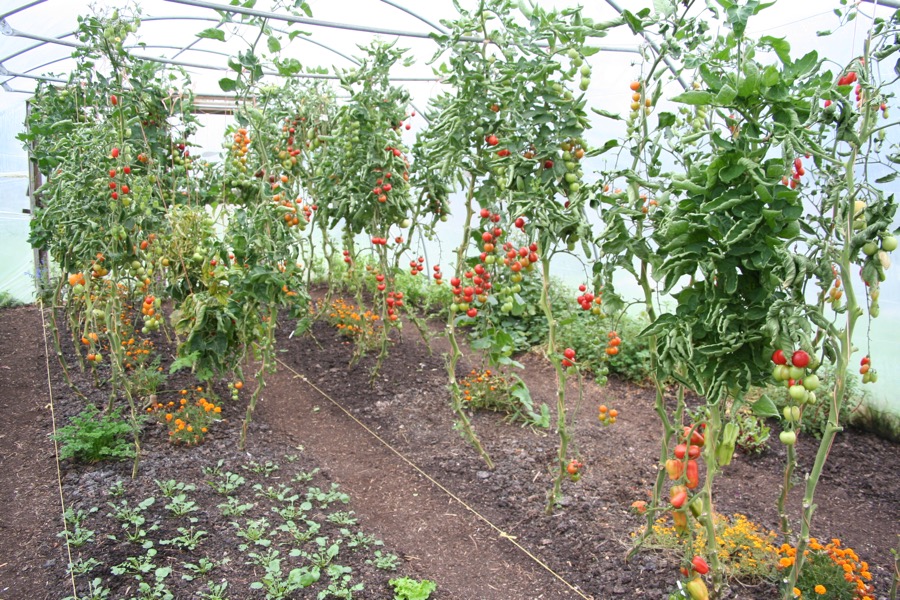 Some tips to help you make a good choice

Polytunnels are wonderful structures and good value compared to greenhouses. Once erected they will be there for several years, so check out my tips before buying.

I have used polytunnels since 1983 when I bought 3 of 18×55 feet (5.5x17m) and they served me well except that their 1in/2.5cm tubes were too thin for my exposed site. In a gale of March 1988, one of them collapsed after the wind ripped out its polythene on the far side, see below for how that works.

I would buy the largest you can fit into your area, because the space is useful for storage and drying washing as well as for growing! One always finds more to plant in a tunnel. Hoops are 5 to 6 feet (1.5-1.8m) apart so length is multiples of that. I reckon that 20-30 feet is a good length for even ventilation, whereas tunnels of say 60 feet length can have pockets of ‘dead’ unventilated air in the middle.

My current tunnel is 42ft long, and works especially well for winter salads, without any supplementary heat.

However any orientation is possible and I have tried many, with success. Other important factors to consider are aligning a tunnel up-and-down any slope (beds across slope are harder to water and mulch), and having the doors at convenient points for access and watering

Plants like fresh air and its important they have enough, rather than striving for maximum heat. Air in a polytunnel circulates from one end to the other, and if possible I recommend leaving a gap between the top of doors and the frame above them, say 6in (15cm), so that a small amount of air can always flow through and increase carbon dioxide levels, without a draught at ground level. I find that winter salads stay healthy, without mildew problems, yet without any need to open and close doors for much of the winter. One job saved!

The option of side vents (instead of the polythene going to ground level) is in my opinion not necessary or suitable for vegetables in temperate climates such as here. Side vents reduce temperature in windy weather, while doors at both ends offer enough possibility to admit fresh air. Its cheaper and simpler to cover the hoops with polythene only, to ground level and below. Keep side vents for long tunnels only, above a length of 40-50 feet (13-16m).

I recommend burying the polythene all around in trenches of one spade’s depth, in order to have a polythene barrier in the ground. This protects against

It is sometimes claimed to be easier and quicker to attach polythene at ground level to battens or rails. However this means you need to dig holes for the foundation tubes, rather than simply knocking them in. Also for windy sites, you may need some concrete in there. All the fixings you need involve extra expense, and are mainly worthwhile if there is simply no room to dig a trench.

My First Tunnels polytunnel has base rails, professionally installed, and they are working well. I asked the fitters to leave a polythene skirt below the base rail (see photo below), which we then dug into the soil.

When burying polythene in a trench, tubes simply need to be hammered into the ground about 12-18in (30-45cm), where their role is to give the structure some rigidity, that is all. When polythene is bured, the tubes are not anchoring the structure in place, but keeping it steady in wind.

In contrast to this, when polythene is attached to a rail and not buried, the foundation tubes have more importance as they are what holds the structure in the ground (rather than the buried polythene) and so you need more expensive tubes with metal brackets on their ends, and each one requires a dug hole, sometimes with concrete.

Although an “extra” I would always buy these, so you have support for climbing plants from tomatoes and cucumbers to beans and melons. They span across from side to side at about or just over 6ft (2m) high, so you can walk underneath, yet also reach to tie strings or stakes.

How many years before re-cladding?

Polythene needs replacing every 5-8 years, depending how windy your site is and how tight you can stretch it. Polythene is easier to make tight when the cover is put on in warm sunshine, if possible. I have often done it in January and managed alright, but the skin is definitely slacker and more prone to damage than when clad in warm sunshine.

The First Tunnels fitters have achieved a tight finish on my 2019 tunnel, erected in May warmth. They reckon the polythene can last for 15 years! This tunnel is 12ft longer than my first one, same width, and has lovely straight sides.

What kind of polythene?

More types become available and choosing is then difficult. From tunnels I have seen with the more expensive thermic or anti-condensation polythene, I doubt that their extra cost is worthwhile. I recommend the standard, light-diffusing polythene which admits around 89% of daylight. Always use horticultural grade polythene, which has a uv stabiliser, without which it would be brittle and break within a year.

A friend recently noticed the great clarity of my standard, light diffusing polythene which is now 3 years old. I had recently washed it with a wet sheet and brush to remove lichen and moss.

You use these a lot so suffice to say, they are worth spending money on to have the ones you like. Home-made is certainly possible, note my tips on ventilation. Its the area where you can be most creative, especially if you enjoy carpentry. For door frames, 4×2 timbers are good.

I like hand watering, but it needs more time. I have two spray lines supplied by First Tunnels, and do not use them a lot because the distribution is uneven. There are several dry zones where we need to water by hand afterwards.

For information on polytunnel growing, have a look at my ‘Polytunnel and Greenhouse Growing‘ YouTube playlist.

157 thoughts on “Polytunnels, advice on buying”