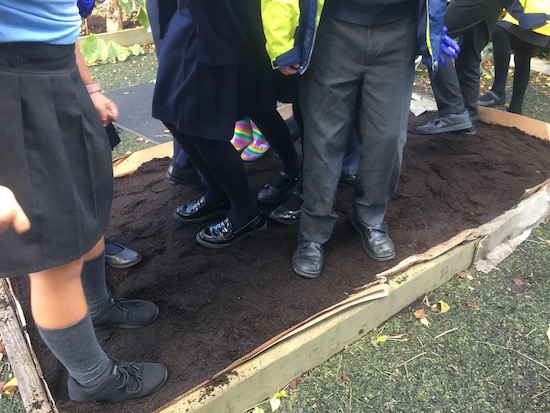 Sowing and Growing for Schools

The gardening methods I recommend, no dig with less rotation and ultimately less weeding, are great for youngsters in school.

My videos receive good comments in terms of child friendliness. This is from Dan a photographer in February 2020:

These videos should be shown in schools, not just to teach them about sustainable gardening, but to teach them how to speak calmly, smile and be welcoming.

For harvests in term time

If you have an indoor propagating facility, sowings can be made earlier than described below, but remember that somebody will need to look after any young plants at weekends and during holidays. These sowing dates are to give vegetables in term time, with no need for harvests or extra work in the summer holidays. Check my Organic Gardening book for further details of how to sow, spacings and other varieties to use.

Or you could source plants that are ready to be set out and this results in much faster and more reliable harvests. For example, check out http://www.organicplants.co.uk/ for a quote to provide seasonal plants.
Also have a look at http://www.proflowers.com/guide/beginners-guide-growing-flowers-organically
for great tips on organic flowers and also http://www.avasflowers.com/facts-about-flowers-for-kids

Broad beans, early varieties such as Aquadulce Claudia and Witkiem Manita, beans should be ready by July.

Early potatoes – make sure you are planting an early variety – should be ready by June.
Beetroot – preferably Boltardy or an equivalent early variety, because summer beetroots such as Detroit risk bolting (running to seed) from sowing so early. First roots in late June (they are deliciously sweet), finish harvesting in July unless you want monster beetroot in autumn.
Parsnip – allow three or four weeks for germination, harvest from late September, sweetest flavour if left until the weather has been frosty.
Spinach – early varieties such as Tarpy and Bloomsdale – check the small print as some varieties are for summer sowing, since they grow best in autumn as days shorten. Harvest in May and June.
Radish – the fastest vegetable of all, milder when eaten young. Harvest late April & May.
Spring onions – choice of white & red varieties, harvest June.
Onion – but lifting time is late July to early September, although they should store until late winter.
Peas (from late March to mid April) – check varietal description to fit your desires, depending on variety harvest from about mid June, most should be picked by late July.
Lettuce – for picking from May onwards as loose leaves or from mid June as hearts.

More of any of the above, although spinach sown after mid April tends to bolt before giving many leaves, and radish leaves will be more damaged by flea beetles (lots of tiny holes).
Carrots – the easiest variety for April is Early Nantes and keep them well weeded. Harvest July, possibly a few thinnings in June if not sown too thickly.
Leeks – usually in a small row to grow pencil sized plants for planting in late June/July. Harvest October onwards, depending on the variety and how hungry you are.
Sweetcorn after mid month (it needs warm soil), harvest September, depending how hot the summer has been and assuming badgers have not scoffed it.

For harvesting before the end of summer term, of all the vegetables above I would recommend only carrots and beetroot, thinly sown for some small roots in July, also leaf beet and chard for spinach tasting leaves through summer, autumn and even into winter.

French and runner beans, courgettes and summer squashes can be sown in May but will hardly crop before late July and will require picking through August, to keep them in production. One way around this is to sow them in late June or early July for beans and courgettes in September and up to about mid October.  OR grow Borlotti beans and runner bean Czar, leave unpicked until late September for picking dry pods with wonderful-tasting beans inside. Czar is a butter bean-equivalent.

Winter squash (onion squash, butternut etc) and pumpkin should grow well from sowing mid to late May, they need a hot summer and harvesting in October, before half term. Tomatoes can be planted (not sown) after mid May, once all risk of frost is passed, to enjoy tomatoes in September, as long as it has not been too damp through the summer.

If you enjoy cabbages, kale, calabrese and brussels sprouts, they can be sown from mid May to early June for planting out early to mid July, harvests from September to Christmas. They may be eaten by caterpillars at times but often become healthier in autumn when insect numbers decrease. Swede can be sown in early June.

Carrots such as Autumn King and Berlicum, sown mid June, should offer some large roots by late September and through October.

Leeks should be ready to plant after mid month.

In early July there is till time to sow a dwarf french bean such as Sonesta (yellow) or Cupidon (green), to crop in September and October.

Autumn salads such as lettuce, endives and radicchios are sown early to mid July for harvests through the autumn.

I hope you will be busy harvesting your vegetables in the autumn. The plantings I recommend at this time are:

Onions, from sets of Radar or other suitable varieties (read the small print), planted in early October should be ready by June.

Garlic, plant cloves in the first half of October, or November if you miss October, for harvesting late June/early July.

Broad beans Aquadulce Claudia do well from sowing in November, to give beans a month earlier than those sown in February and March

Kate Robinson runs a productive and no dig salad garden, beside her home in Wells, Somerset. She also uses it as a way to offer healing for people with disabilities, who find that working in her garden, and other places where plants are growing, is such a great process for helping them to feel well and happy.

For more on Kate’s garden and work, see www.newleafsalads.com

Converting wastes to grow food, reducing waste in the garden