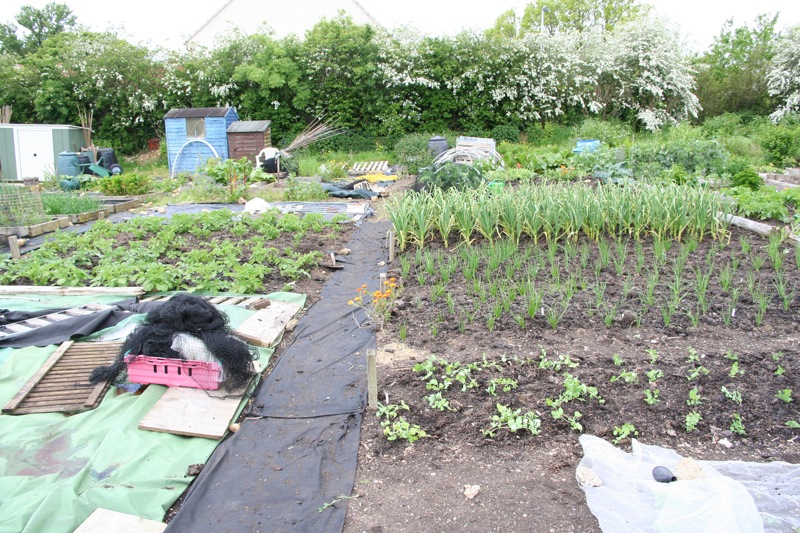 Starting with a weedy mess is normal and, if this is the case for you, my video has tips for clearing ground with no dig.

Here is advice that may be applicable to your situation – take the bits which work for you. Every site is different, every gardener has different needs, abilities and resources.

Allotments are big, too big for most people to dig over and clear in a weekend. However you can mulch any sized area quickly, with cardboard or polythene – see my video about clearing weeds without digging.

The key point is to starve weeds of light.

With clean soil you could make some beds of any size by simply putting compost or well rotted manure on top. What compost or manure? I can’t advise for every situation, sometimes municipalities sell ‘green waste compost’, sometimes not. There may be a local stables but you need to find a car (or tractor) and trailer to bring in enough manure, preferably dark and well rotted.

Organic farmers don’t usually sell manure – they need it all and value it too highly – and there have been problems with contaminated manure from horse manure. It has been realised, too late, that some animal dung contains herbicide from their diet of treated grass or hay, so try asking questions of your source like “was the feed grass sprayed with aminopyralid herbicide?” Yes, we live in a rotten world!

It is mostly horse manure that has this problem, because horse owners like clean hay.

Beds with compost on are often bordered with wood of 6” (15cm) width, but this is not obligatory. Enclosed beds are clearly defined and look neater, but their edges can dry out more in summer than un-bordered beds where compost is allowed to spill slightly into pathways. The compost is not wasted because roots feed into paths and also use them as a moisture resource.

A further issue with wooden sides is how they harbour slugs and woodlice, especially as they begin to age and decay. You can save money and trouble by not using them but paths then need to be more weed-free, so that weeds don’t spread into beds.

These need to be weed free, as much as beds. I use cardboard to mulch paths for 6-9 months, enough time to kill most weeds. You need to put more cardboard on top every three months, before weeds can grow through the older, decaying cardboard.

So you will be using polythene or cardboard in year one, to clear perennial weeds. This is easier if you remove any old wooden sides before starting.

Think of mulches as feed for the soil, as well as to suppress weed growth. When soil is undisturbed and its inhabitants are well fed, fewer weeds grow, so the two go together.

Beware the tendency for mulches of any kind of plastic to disappear below surface level. It seems impossible at first sight for this to happen, but I frequently hear stories of  people taking on new allotments in the UK, then discovering synthetic carpet, plastic and membranes buried and out of sight. Once some soil or compost and weeds land on them, nature quickly colonises the surface. Such buried materials are impermeable both to the roots of our plants and to larger organisms in the soil, and are therefore a general hindrance to growth. Plus they are a pollutant in the case of non-wool carpets, i.e.99%+ of carpets available.

I like to use woody mulches on paths, where practical. When beds have no sides, don’t overdo the depth of woody mulch, to prevent a lot of it ending up on your beds. A little is fine, more is fine too if the wood is half or more decomposed.

If your compost is soft and even, you can sow or plant straightaway. Otherwise it works well to make beds a month before starting to sow or plant, so that a little weathering can happen and perhaps a first flush of weeds can be hoed off or hand weeded.

Is it your first time growing vegetables? If so, take a good look around at how neighbours are doing, and what crops are growing well. Be prepared for some failures until you have enough experience to appreciate what works for you.

The uncultivated remainder of your space could be mown or scythed and then covered with black polythene or old wool carpet. Cardboard can be used but will decompose before perennial weeds such as couch grass, docks, dandelions and buttercup are dead, so it will need renewing every 2 months or so, depending how thick it is. When used for clearing ground, cardboard is best weighed down with a few stones or poles around its edges.

Perennial weeds that are mulched take different lengths of time to die off, according to how much food and energy they have stored in their roots. The following lengths of time in complete darkness are to give you an idea: buttercup 2-3 months, dandelions and stinging nettles 4 months, ground elder 12 months, couch grass 9-15 months, bindweed and mares tail 18 months plus. These are approximate numbers, times can be less in summer and more in winter.

If you are faced with only annual weeds (bliss!), cardboard is still useful as the first layer of a weed free mulch, with 7-10cm/3-4in compost on top which can be sown or planted into.

From two to six inches of compost is the one-off, initial application. Once a no dig system is up and running, with perennial weeds gone and only vegetables growing, the annual application of organic matter is no greater than on any other well run garden, about 2.5 cm/1 in per annum.

Putting compost and composted manure on top serves to create, over time, a soil that is well structured but firm, free draining but also moisture retentive, and darker on top, with a superficial tilth that can be sown or planted into. This approach works well even for carrots and parsnips, crops that are supposed to fork when compost or manure has been added. Potatoes need loose compost or soil, but only near the surface for their tubers to swell, and “earthing-up” with compost replicates this.

It is a fair job to mulch and set up a clean, no dig plot, but by the end of a year you should find gardening becomes more enjoyable and creative, with less of the routine weeding above all. Just do not allow any of the (smaller) number of weeds to go to seed!

Allan Cavill, Regional Director and South West Mentor of the National Allotment Association, says that no dig allotments stand out for their fewer weeds and healthy plants; he is surprised there is not more take up of no dig on allotments. He is worth contacting for advice, having practised no dig on his plot since the 1960s.

Claire Lassman, a biologist from Frome in Somerset, wrote in June 2016 that, “On the allotment site where I have a plot, it is easy to tell those who use no dig because the veg they grow is so vibrant.”

Below is a tale of two allotments…

Here are some pictures of Robin Baxter’s no dig allotment in Ilkeston, Derbyshir,e which he took over in a dire state, just after visiting Lower Farm in 2008. The images are testament to his commitment and to the fact that he is no stranger to hard graft where it is needed, mostly at the beginning stages. The plot is now clean, fertile, and needs much less input of time, and he grows a lot of delicious food there now.

Robin now is master gardener for Garden Organic in Rye Prison nr Coventry, running a hugely successful programme, helping prisoners through their involvement in creating a beautiful garden, on Ministry of Defence lack-of-soil! Robin’s work is receiving much acclaim from university researchers.

Steph no longer lives in Bruton, but here are some photos of the allotment she used to have there.

Instead of digging in 2008/9, Steph spread green waste compost and some cow manure on beds that were already in place, just slightly raised soil with no wooden edges or borders of any kinds. Before that she had done a thorough weed, although many annual weeds would have been smothered by the three inch covering.

The soil is heavy clay, and perennial weeds are endemic to the site-creeping tourmentil, couch grass and bindweed, but no marestail. Steph had got on top of the perennials during the two preceding seasons but was not harvesting a huge amount of vegetables, especially in autumn and winter.

By this stage we had fourteen slightly raised beds with narrow pathways between them. The green waste compost contained quite a few small bits of wood, and not hugely rich in nutrients, but was free of weed seeds and served as an initial weed suppressing and life enhancing mulch. Worms could now get busy while fungi, bacteria and all the vital organisms needed for healthy, fertile soil could multiply.

Then, in 2012, Alan did a sponsored bike ride and was absent a lot so he suggested that Steph help out with his allotment. Her idea was to spread cow manure about two inches thick and weed any plants pushing through, with winter squash planted in June. However… the weather messed this up rather as a combination of residual weeds and slugs and a lack of good weeding weather meant that harvests were small on Alan’s plot, although good as usual on her own allotment, with few weeds.

In 2013 and 2014, she mulched Alan’s plot with polythene and composted manure, before planting squash, beans, potatoes and brassicas, with good results.
On her plot she grew great garlic and onions, followed by some stunning autumn and winter brassicas including calabrese, Brussels sprouts and savoy cabbage.