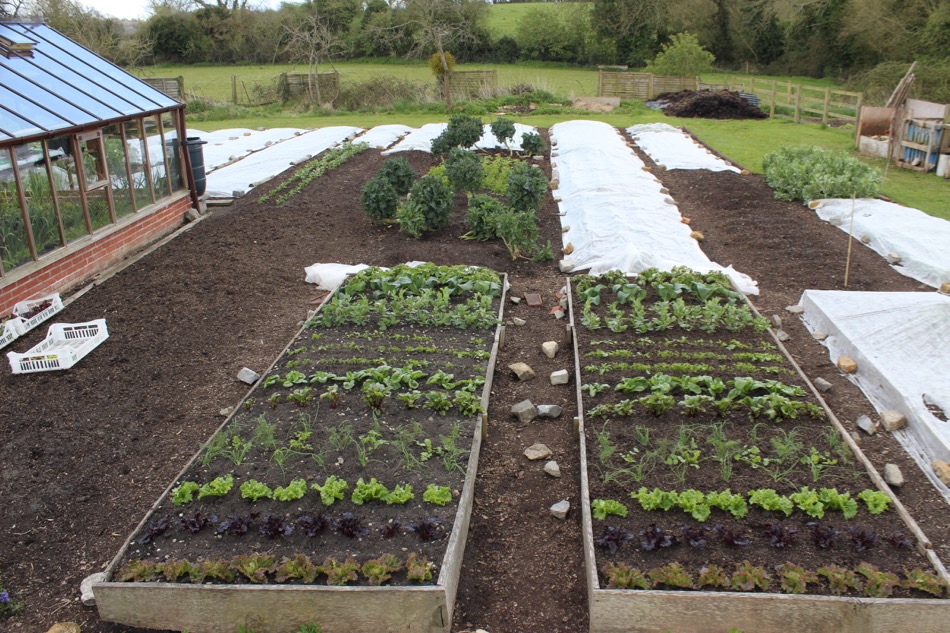 Frost and hail in late April were a timely reminder to wait before sowing and planting warmth-loving plants. In this area (SW England) its good to sow runner and French beans mid month, undercover, for planting in late May or early June. Even then the wind can be cold and after planting and often I cover young bean plants with fleece (celeriac too unless its hot), which is why I prefer not to put up bean sticks until plants are growing strongly.

Fleece covers have been absolutely fantastic at sheltering seedlings from the cold winds. However my method of laying fleece directly on top of seedlings means that frost sometimes singes leaves where they are touching the cover. That small issue is more than offset by the general gain in heat from having fleece so close to the plants, so that it can hold more warmth where it is most needed, in the soil surface and close to plant leaves.

Many of my fleece covers are coming off this coming week, some to be replaced by netting and mesh if the crops are susceptible to birds or rabbits.

The weather, how much does it change timings?

In spring, sowings tend to catch up, so delays that feel bad at sowing time feel less bad after a few weeks! Be patient. Seasonal sowings work because plants sown at their best time are able to cope with unusual weather, so check my sowings timeline.

For example the spinach I sowed on February 11th, planted March 14th and grown throughout under fleece, has suffered many frosts. But it survives frost and is programmed to make masses of large leaves in cool weather, when days are lengthening fast. We picked it for the first time, just three hours after a frost of -3C, to have 3kg of lovely leaves from an area of 4x5ft (1.2×1.5m). And that is just the first pick, it will continue cropping until flowering after mid June.

Even in May they are useful, so we just topped up the greenhouse hotbed with a large wheelbarrow of fresh horse manure and the temperature has maintained at 60C 140F, one foot in. The outdoor hotbed is simply a recently made compost heap, see below, and its temperature one foot in is a steady 50C. This has kept frost off the plants sitting on a wooden frame above it, but there is a lot of steam around their leaves so this would not suit basil, for example.

On course days here, I have always noticed the high level of interest in compost making. Like many growers and gardeners, I find it hard to put enough time into looking after my heaps, so I went on a course with Zach Wright to learn more (organised by RegenAgUK). Meanwhile, Steph and Felix looked after the salad picking.

What Zach recommends is not applicable to everyone so I took the bits that can work here, which are:

In a nutshell, my heaps have not been aerobic enough, and introducing air is a challenge in damp climates where water tends to fill the air pockets. My metal aerator has helped in that, see https://charlesdowding.co.uk/midwinter-update-jan-22nd/

This is about making the highest quality you can, using whatever is available nearby. As I understand it, Zach recommends 40% brown, 40% green and 15% ‘activator’ of high nitrogen, such as brewers waste (barley mash) or fresh manure. The other 5% can be old compost, soil, old manure, and we added some rockdust.

Best results are from assembling in one day.

I have been much helped by an extra pair of hands and Felix turned the winter compost heap as soon as its last additions had gone on. First addition was in December, of asparagus stalks.

Since turning the temperature is ready 60C or more in a large area of the middle.

Thanks to Peter McGuire from Shepton Mallet, who ordered some Klasmann seed and module compost, we have been able to do a little trial, comparing chard, basil and leeks sown into it, compared to my normal West Riding. Seedlings are growing a little larger in the Klasmann and germination has been excellent, for example of basil, which struggles with the rich density of West Riding. It works well when diluted with 50% vermiculite, just for sowing.

Incidentally the Klasmann worked out at £8 for 70l, compared to £6 for 40l of West Riding. But its based on peat.

Onion leaves are fragile and yet I am finding they can do well with fleece laid on top, as in the photos below. This week I plan to remove these fleeces and shall need to cover plants with netting suspended by hoops, to keep rabbits at bay.

This spring I have found fleece extremely useful as weather and pest protection.

I am not certified biodynamic but apply the wisdom where appropriate. I think that stirring water in vortices, and breaking them to make ones in the counter sense, is a brilliant way to energise water and from it the soil. Viktor Schauberger told of a farmer in Austria who did that before biodynamics was even invented: instead of a bd preparation, he energised the rotating water by singing!

Here I buy some horn manure preparation and we apply it in spring and autumn.

Hector from near Villarreal in Spain has created a no dig garden and he writes “My experimental organic garden here in Spain is working very good. I am very surprised about the result”. He is highly trained (hence perhaps the surprise!) and currently works on a huge vegetable farm in southern Spain.