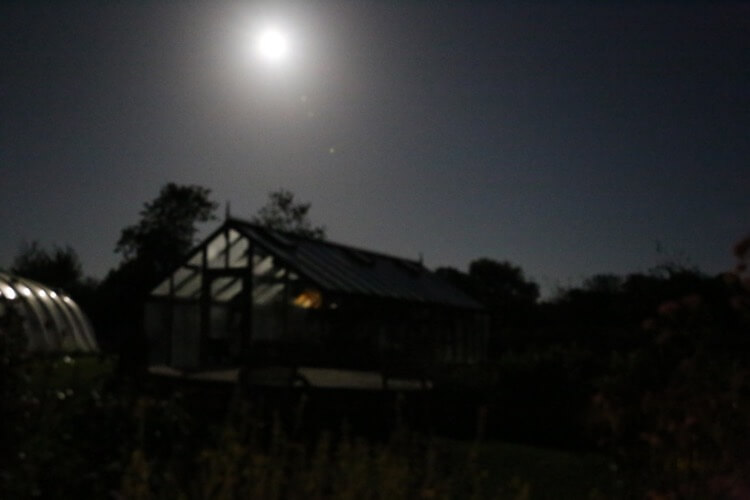 Gardeners at my talks and courses show keen interest when sowing by the moon comes up. This does not mean sowing by moonlight! It is about choosing dates for seeds to germinate when the moon phase or position can give plants a desirable imprint for their whole life.

In 2011 I conducted several trials with plants alongside each other, comparing growth and weighing harvests. To study any differences between waxing and waning, I sowed half the seeds two days before full moon (waxing) and the other half two days after full moon (waning).

Carrots sown either side of the full moon in mid-March showed stronger growth of the waxing carrots, and when pulled in June, those yielded 7.8kg of roots compared with 4.8kg from the waning carrots. This difference arose partly from greater slug damage to the waning-sown carrot seedlings – and was that because they were weaker, due to moon phase? However I then sowed two batches of turnip seed, waxing-waning in the same bed in July: they yielded 3.3kg and 3.5kg respectively by November, while potatoes in another bed also reflected that result with 4.3kg waxing and 4.7kg waning.

Then in 2012 I ran a similar experiment to the first one above, and in the same bed too! I had spread two inches of cow manure on it in November and there was a lovely soft surface by March. Carrots sown two days before full moon on 6th March yielded 9.9kg, while those sown three days after full moon on 11th March yielded 9.2kg, of similar excellent quality (despite the lack of rotation….), so less of a difference than in 2011 but still significant.

Such variable results can raise questions as much as give answers, and there are other factors to consider, besides total yield. For example, a comparison of french beans, in two large beds, gave 15.41kg from sowing two days before full moon, compared with 13.97kg from those sown two days after full moon. But the lower yield of waning-moon beans was offset by their greater longevity: although they produced less initially, when beans were prolific, they gave more in September when beans were scarcer.

Another aspect of moon sowing is by constellation, with the moon changing every two or three days compared to a month for the sun. For example, sowing with the moon in Pisces, a water sign, should emphasise leaf growth (good for lettuce, spinach) while sowing in Taurus, an earth sign should encourage root growth (good for carrots, beetroot) and sowing in Leo, a fruit sign, should result in proportionately more tomatoes and courgettes.

So we sowed half a bed of carrots with moon in a water sign and half a bed, one week later, when it was in a root sign. Both grew well, in fact the former looked stronger, but after weighing up the final harvest I found a 20% increase in total yield of carrots from the root day sowing. And two sowings of dwarf french beans, half on a leaf day followed by half on a fruit day, saw the latter yield 9% more.

Charles’ review of In Tune with the Moon 2013, Michel le Gros

This book is more than a calendar, with so much background information on moon rhythms and how they affect gardening.

Patterns of moon movements are life absorbing and life influencing, yet hard to understand, and there are helpful explanations of waxing/waning, ascending/descending/, signs and constellations, apogee/perigee, nodes and trines, even the tides. All in a way to make the link with how plants grow.

Then the daily calendar is in a wavy, graphic form, which I find less straightforward that Maria Thun’s calendar format until you get the hang of it. I prefer the ‘note pages’ which fill the book’s last third, where each day is identified for its moon qualities.

Overall my head was swimming a bit after seeing all the recommendations, covering aspects of gardening such as sowing, planting, harvesting, storing, pruning and grafting. This attention to detail is only practical, really, if one lives a life with wide open spaces for doing everything at the best possible time. I think that most of us are mainly governed by fitting our gardening into life’s other demands, people and the weather, so there is a danger with prescriptive almanacs that they can make you feel bad for doing a job on the “wrong day”. Biodynamics and organics as a whole often feel a little like that to me, as their followers have created a whole code of best practice which can be more daunting then helpful, and you end up feeling guilty for infringing one of the “rules”.

In fact, my experiments have shown that sowing on “wrong days” by the moon still gives good results! I ignore the rules where I feel they are not appropriate in my gardening, for instance I do not practice a four year rotation, I do not dig (most biodynamic gardeners believe in digging to let the cosmic forces in), I spread compost before sowing carrots and so forth.

In a similar vein to moon forces, this is from Jane Cobbald of Implementations.

From his understandings of the ways of living Nature and his experience as an engineer, Viktor came to the assessment that cultivating the soil with copper implements would be more beneficial to the Earth and lead to healthier plants. In his writings, he listed several reasons for this.

In the late nineteen-forties he collaborated with an academic from Salzburg to institute some field trials to test this idea. They grew a range of eight crops over fourteen trials, cultivating each test plot half with a copper-plated plough and half with a conventional steel plough as a control. The results were consistent. The crops cultivated with the plough with copper ploughshares had larger, healthier yields and fewer pests.

Despite the success of the trials, for various reasons he was not able to go into commercial production. However, his family kept his ideas alive and in the late 1990’s a coppersmith was invited to develop a range of garden tools, inspired by Viktor Schauberger’s work nearly half a century previously.”