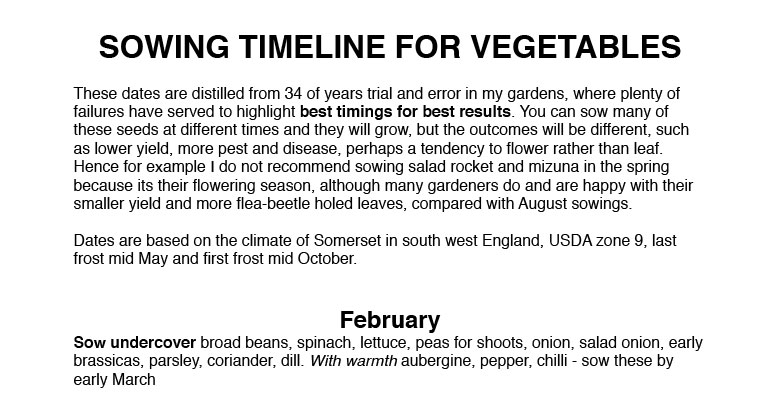 These dates are distilled from 34 of years trial and error in my gardens, where plenty of failures have served to highlight best timings for best results. You can sow many of these seeds at different times and they will grow, but the outcomes will be different, such as lower yield, more pest and disease, perhaps a tendency to flower rather than leaf. Hence for example I do not recommend sowing salad rocket and mizuna in the spring because its their flowering season, although many gardeners do and are happy with their smaller yield and more flea-beetle holed leaves, compared with August sowings.

Dates are based on the climate of Somerset in south west England, USDA zone 9, last frost mid May and first frost mid October.

Sow outside broad beans, garlic if not already

Sow undercover as for March (except its getting late for celeriac, sow asap), leeks, leaf beet, beetroot (all varieties), chard at month’s end, tomatoes for outdoor growing. With warmth and around mid month, cucumber, courgette, squash, sweetcorn

Sow outside same as undercover, also maincrop potatoes in early May, carrots, parsnips but keep seedbed moist until germinated.

Sow outside same as undercover, carrots until mid July.

Sow outside same as undercover but approximately a week earlier

Sow outside same as undercover but a week earlier, last salad sowings by 10th September.

Outside sow garlic. You can also sow onion sets though I recommend caution with these as they risk harbouring mildew over winter which infects onions in May and thus reduces growth/storage potential of spring-sown onions.

Depending where you live, from early November its worth sowing broad beans to overwinter as small plants, such as Aquadulce Claudia; sowing in December is possible too, likewise for garlic.