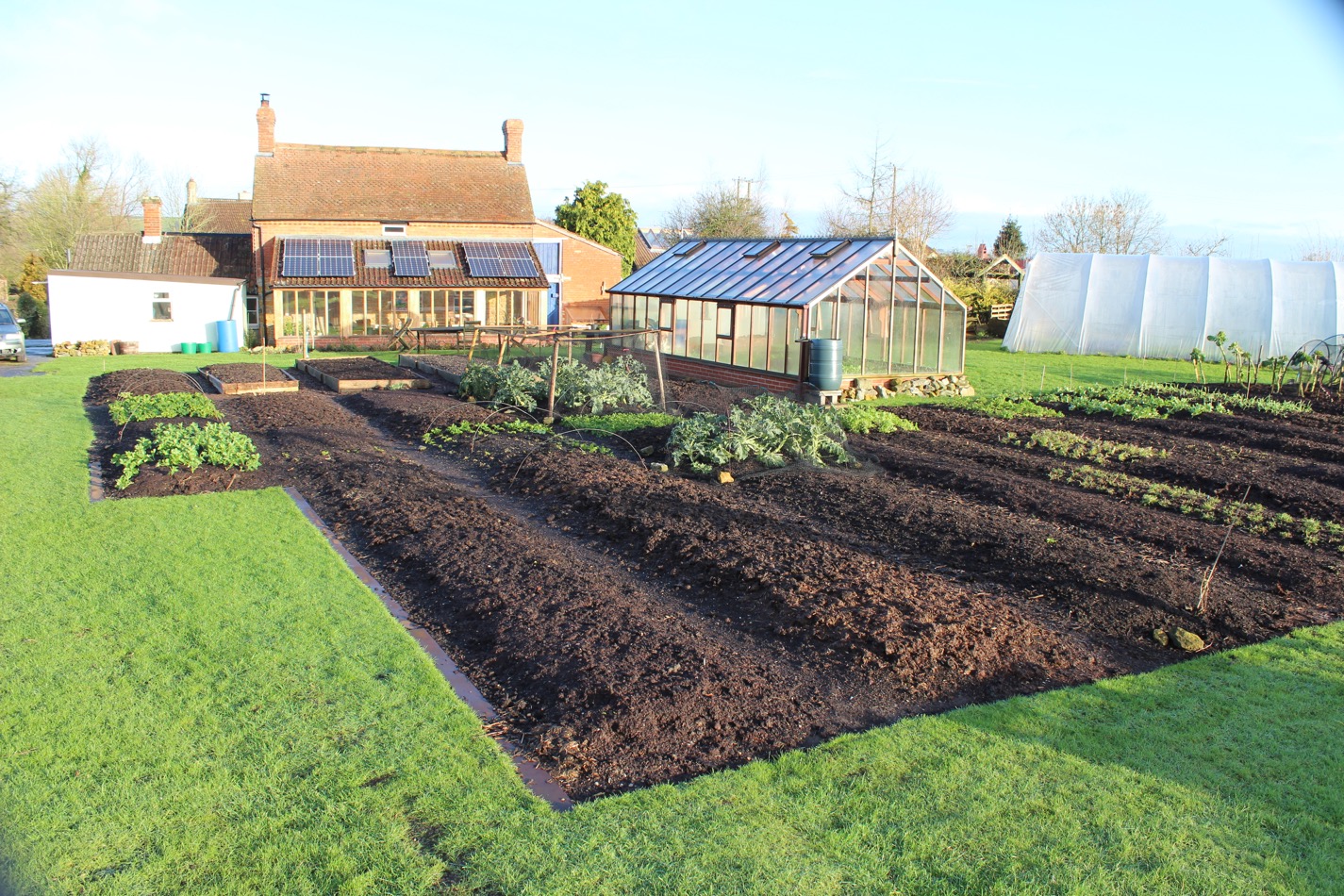 Its been so mild this winter, so far, and now when the sowing green light appears, so do frosts! However the light levels are improving fast and under glass or polythene this means warmth by day. All the sowings I recommend here can tolerate freezing, even if they don’t profit from it, so while its worthwhile to warm the seeds I recommend sowing now, its not vital. Unless you sow tomatoes, but I recommend early March for that.

Germinating seeds need more heat than young seedlings, although this becomes more important in March and April. For now, sowings are of seeds that still germinate in cool conditions.

Onions are a bit different because they germinate poorly if its too warm, say over 20C. But gentle warmth still helps them underway and I am excited to sow my first ever home-saved onion seed, 6-8 per module for planting in clumps. I don’t recommend planting onion sets yet because frosty nights can make them go to seed by June.

At Homeacres we are filling a hotbed tomorrow 15th Feb, to provide bottom heat for module and seed trays above it, which sit on a wooden frame.

Its good to wait too

In cooler climates than here, sowing the above in early March will lose little time and give stronger plants. Remember the golden maxim Spring sowings catch up, because days until summer solstice are always growing longer, and often warmer. Sowing when conditions are more suitable for seedlings ensures they survive and indeed thrive. And you waste less seed.

In my experience its too early hereabouts for beetroot (late Feb undercover and Boltardy only), celery, celeriac, leeks (all mid March undercover), carrot (from mid March direct). Parsnips are possible but mid March is easier, after a thorough hand weeding, if there are some.

No dig is great because you have beds ready at any time. Just do occasional weeding to keep them clean until needed.

in a forum topic, Hawfinch offers this advice: “I cannot sow anything directly as the slugs demolish anything small and new. Therefore, I start carrots and parsnips in guttering, if one takes care to slide them into their final growing spot before they get too big they do absolutely fine.”  You need to get these tap-root seedlings in place while still young, to avoid forking.

There is also a helpful discussion about whether its worth covering beds before sowing, to warm them, and generally its not, another job saved https://charlesdowding.co.uk/forums/topic/fleece-covering-to-warm-up-beds/. I like the experiment with children to check temperature differences, good science!

Transient warmth from fleece is beneficial to growing plants, so its best to lay a fleece cover immediately after sowing and planting, and directly on top of them.

How high? With or without sides?

It depends how high you want them for working, issues of drainage and drying out, and your budget, because sides cost a fair amount when doing say a whole allotment. Also wooden sides, especially when old and decaying, harbour slugs and woodlice.

Last November I was given some topsoil and have used it to raise some beds where they are currently almost  level with paths. First, with a sharp spade I scraped off the top 2-3in of compost, into one barrow, then used my other barrow to fetch and spread a 2in layer of soil, then put the first barrow of compost back on top. So the bed is now higher, and the weed-seedy soil is underneath a layer of weed-seed-free compost.

To raise beds, another option is to scrape the top layer of 3in compost and soil (as long as not weedy) from paths, onto beds, then mulch paths with an inch or so of wood shavings, rough compost or whatever. Paths go down and beds go up.

Any advice along these lines is different for protected cropping, because undercover space is so precious. In my polytunnel and greenhouse, especially in winter, paths reduce to 12in if we are lucky, its a ballet dance to pick the salad! Beds are scarcely raised, plants root into the composted paths, drainage is not an issue (no rain) and weeds do not grow.

At this time of year these are hungry pests. Parsnips have been discovered by rats around here, for example Steph lost a lot, for the first time, on her allotment. Rat damage prompted me to harvest and then I was shocked by the amount of canker (shoulder rot). Fortunately you can trim it off but its not pretty; its a result of roots being in wet soil, mild temperatures too. I could avoid it by harvesting in December but roots would be less sweet from experiencing even less frost.

Pigeons have been flocking to all my brassicas except for savoy cabbage. They started while I was away for my week in Tenerife in mid January (how do they know?!!), the damage is bad. I saw about ten fat pigeons on the broccoli plants, the first morning after returning.

Tenerife by the way is very dry and it helped me appreciate our rain!

Soil type, its not everything

When writers describe how to grow particular vegetables, they often slip in something about what type of soil is best for which vegetable. Mostly (not always) I feel this makes growing sound more complicated than it needs to be.

In a recent post from GIY, Shona Dubois says two things I have not found to be the case “Beetroot likes a deep, sandy soil, manured the previous winter. Apply organic fertiliser about a week before sowing.”

I have grown lovely beetroot over 30+ years in different locations, on shallow stony soil, on yellow clay and on white clay. Undug and with a compost mulch means you don’t need “organic fertiliser”, because that is what compost is and does, its a slow release fertiliser as well as food for soil organisms.

If your garden is visited by blackbirds, they make a mess of compost-mulched beds. Most affected are beds mulched with homemade compost and composted animal manures, as they have more brandling worms, compared to mushroom compost and green waste compost which hold few.

Messy as the blackbirds are, their presence is a sign of good soil life. Also I don’t mind some compost ending up on paths (some of it I kick back onto the beds) as it helps to feed the path soil and keep them weed free – I still need to weed paths, but its easier and there are few weeds.

In a polytunnel in this climate (zone 8/9), almost any salads are possible overwinter except for most varieties of lettuce except Grenoble Red: its the only lettuce you see in the photo at top. Also pak choi was devoured by slugs, when nearby spinach and lettuce were fine! A notable success this winter has been broad leaved sorrel, less holed than usual, from an August sowing.

Currently I water about every two weeks, so the surface stays drier, to discourage slugs.

Outdoors the Taunton kale continues to impress, as long as I can keep pigeons off – its height makes that tricky. Salads to thrive outside this winter have been land cress, Claytonia, spinach, lambs lettuce and salad rocket. Wild rocket is starting to grow now, very slowly, and I shall fleece it for first harvests in April.

You can choose from the many possible combinations of cardboard and other organic matter, soil too if you have some (its not worth buying in). In the pics we spread 3in soil and 2in year-old cow manure on top of grass, dandelion and creeping buttercup, in October last year. Then I planted raspberry canes.

Now the buttercup are growing through in places. Perhaps if I had put cardboard before the mulch, it would not be growing, though from autumn mulching, which gives time for card to soften before the buttercups regrow in late winter, it might have made less difference.

Whatever, I am now laying cardboard on top as soon as I can find some!

LOGO hot off the press

After some correspondence, Eileen Wood who fashioned this version has fine tuned the design to this, and its looking like the final throw. I hope you like it, we went for some details but not too much, and the carrots as a neat pictorial emblem of success with no dig.

Thanks to everyone for feedback and especially to  Sarah Davenport, Tina Hart, Sol Chadwick, Edward Dowding and especially Steph who have all contributed to and helped to refine its qualities.

The collection for £15 comprises one plant each of Carolina Reaper, officially the world’s hottest chilli at 2,200,000 Scoville Heat Units (SHU),Trinidad moruga Scorpion Yellow, which has been recorded at 2,000,000+ SHU, Ghost Chilli or Bhut Jolokia (1,041,000 SHU)  and Naga Morich (1,000,000 SHU). All four have at one time been regarded as the world’s hottest chilli. Compare these to the relatively ‘mild’ Scotch Bonnet at 325,000 SHU. The World’s Hottest Chilli Plant Collection is offered at D. T. Brown’s website www.dtbrownseeds.co.uk