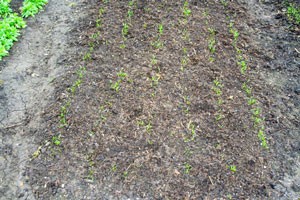 March turned into an exciting month as an abundance of sunshine encouraged much new growth of salad leaves in the polytunnels. Also, many new plants of lettuce, spinach, peas, broad beans, beetroot, sorrel and parsley have been growing in and were then planted out from the greenhouse. This pattern will speed up even more in April, a key month for sowing and planting, also for harvesting leaves of indoor salad plants that have been overwintered.

Daylight levels in April are approaching those of August so any warmth in the air allows rapid growth. On the other hand, north winds can result in cold nights so it is wise to wait for the correct calendar dates before sowing and planting, to be sure of successful growth. This is sometimes easier said than done, as warm sun encourages us to reach for those seeds!

Fleece has many possibilities at this time of year because it protects plants from any cold winds and rain or hail. I use it over plantings of lettuce, beetroot, peas, calabrese, cabbage and other brassicas – in fact, almost anything. As well as protecting plants from inclement weather, it stops pigeons pecking leaves of peas and brassicas. I advise you to buy the thickest, strongest type so that it can be re-used time after time: don’t worry if it gets a little muddy after first use, the rain will clean it when laid again. When spreading a fleece out, pull the edges and ends tight: plants prefer that to having it flapping on top of them.

Since so many of the main vegetables can be sown in April, let me remind you of the ones that should not be, in Britain at least, because they need the more regular warmth of May and June. French and runner beans, sweetcorn, basil, courgettes, squashes and cucumbers will grow much better from sowing after mid May outdoors (or late April indoors).

Also wait a while before sowing vegetables that require decreasing daylight to give of their best. At the moment, days are lengthening rapidly so any sowings of rocket, endives, chicories, mizuna and most other oriental leaves will make only small harvests of leaves before flowering. Spring is their season for making flowers, so they want sowing after the solstice in June if you want many harvests over a longer period.

Time is moving on for any remaining ground preparation. While giving a talk in Buckland Newton, Dorset, I was asked about ploughing or mulching for a new allotment site. My preference is definitely for mulching, with black plastic or cardboard or whatever is to hand, but I would not necessarily turn down an offer of ploughing if someone was going to do it, but only as a one-off to help kill surface growth. After any such cultivation, there is a lot of knocking the soil around to break up lumps and shape beds or whatever, also to remove any lingering perennial weeds. If ploughing is done in April, it will be at least a month before any sowings are possible, and I would recommend using bought in or home raised plants instead.

Rotovating is another possibility for initial ground clearance but perennial weeds will be chopped up and may then multiply if soil stays damp.

An alternative to cultivating soil is surface mulching of grass and weeds, with combinations of compost, thick cardboard and/or black polythene. If this is done in April, it will be up to two months before planting is possible, but there should thereafter be a lot less weeds than if soil had been cultivated. I recommend spreading some compost on the surface before mulching, see previous advice for more details.

Finally, remember that broad beans, unlike french and runner beans, want sowing by the end of April, as do peas, because they crop more healthily in early to mid summer. When sown in May, broad beans risk suffering more aphids and chocolate spot. Peas sown in May risk being attacked by pea moth and mildew after about mid July.