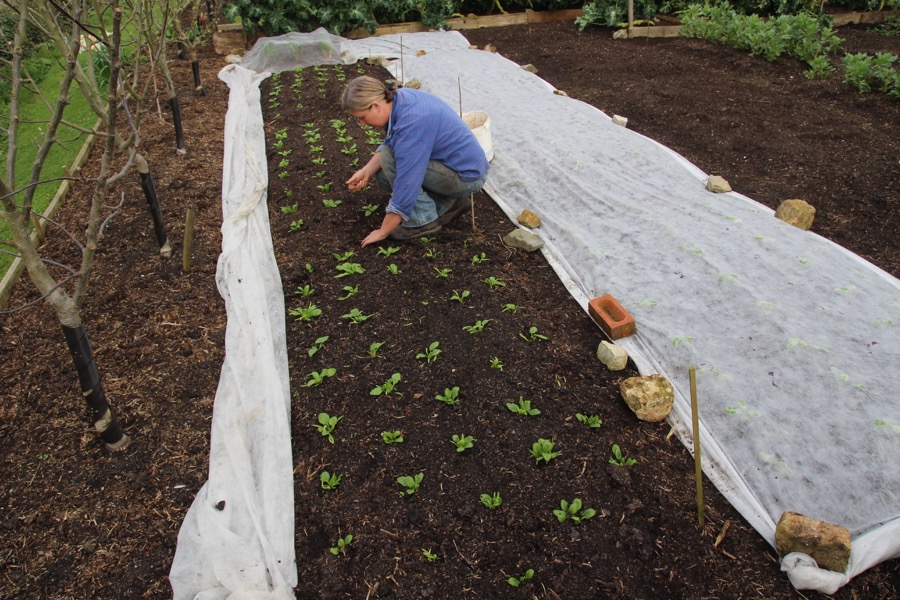 Here, it has been much warmer than usual in March: the day-night average temperature was 9C/48F and we had no frost at all, breaking my records of 40 years. It has also been the dullest March since 2001!

Net result – growth is ahead of normal, but I advise not to get carried way. I only just sowed tomatoes and am not sowing basil until next week, courgettes mid April etc.

I was asked how I protect plants from slugs, which might eat those small and tender looking lettuce, spinach and cabbage. It’s about being prepared in advance.

Protection is long-term: have minimum hiding places for slugs and snails, anywhere near to beds for new sowings and plantings. Three things at Homeacres keep slug numbers low:

Last year 2016 saw harvests of 120kg/264lb from a 2x9m (6.5×29.5ft) strip whose beds we loosen with a fork, and 142kg/312lb from the adjacent 2x9m strip, which is no dig. Both strips are mulched with the same compost and I show them in this video. We are planting up the strips again, after forking the beds of strip one in early winter.

Each strip is also part of a no-rotation trial, see this video for more on that.

Both beds of the main dig/no dig trial are planted already, see here for more on them.

Why not sow vegetables in autumn, to serve as both crop and green manure?

The former grew ultra fast and I thought the Red Dragon was shaded out, but after the winder frosts of -6 to -7C (19F), which killed the white mustard, I was delighted to see lots of Red Dragon, growing strongly. We have had good harvests from it during March, for salad, and more to come. Larger leaves are good for stir fry.

In September I shall post a video about this, as a reminder to sow these salads. I have picked them regularly since November, for a total harvest of over 2kg, without any feeding of the Klaasman multipurpose compost.

The boxes have been in my unheated greenhouse, lowest temperature this winter of -5C 23F, just three times. These salads resist frost to about -10C 12F.

There is still time to sow peas – as soon as you can. Pea plants bulk up best in spring, for large harvests in early summer: they are less happy to start growing in summer heat, with more pest and disease problems too.

Notice the different spacings: peas for shoots at 10in/25cm. They are nearly ready for a first harvest. For pods, a tall variety, we planted just two rows along the bed, where the multi-sown plants are 4-6in/10-15cm apart, and will need staking.

Such an early spring has brought the harvest forward by 2-3 weeks. As well as Claret, I am growing a “later” variety Pozo, but it is also cropping now.

This will mean less broccoli in May, but perhaps more of other veg such as early cabbage.

March has seen an abundance of leaves, all carefully picked by hand. The only ones I cut are Claytonia/winter purslane. Biggest harvests are from the fantastic lettuce variety Grenoble Red.

The undercover plants have no feed given in winter. We had spread 3in/7cm compost in May, before planting the summer crops, and none of the summer crops were fed either. This saves time when growing tomatoes.

Currently under cover, we water once a week, a good soaking, In between watering, the surface dries out and that helps to discourage slug and leaf-mildew.

This glorious subject appears in our new book: there are ten hummus recipes for example.

A combination of how to grow and ideas for eating the abundance, plus chapters on picking and storing. We also write about making compost and saving seed.

In the USA this new book will be sold by Chelsea Green Publishing, and they sell my diary too. Currently their home page features an excellent book on mycorrhizal fungi, by Michael Phillips.

She is harvesting lovely chard, cabbage, stir fry mustards and salads. Carrots and calabrese soon. Her blog explains all.

I am out and about. The RHS garden festival in Copenhagen looks really interesting, at a lovely time of year, with 8 show gardens and 250 trade stands. I talk twice on no dig gardening, at 1pm on both Saturday 24th and Sunday 25th.

In Italy it was a great conference organised by Ruth Loffa. Tops for me was the chance to attend the presentation by Jean Martin Fortier, Quebec’s market gardener who is overseeing a new and large Ferme des Quatre Temps, for training new market gardeners. We had a great chat afterwards, lots to compare.

What a pleasure also to spend time with Iain Tolhurst and his wife Tamara. They run 26 acres of stock free market garden in the Thames Valley, where the only compost is from wood chips, and Tolly uses it for potting too.

Audiences for my talks have been high, and responses to no dig are enthusiastic to say the least.

I err on the side of caution, therefore in a warm spring like 2017 (in southern UK at least) there are a few dates that look too late. On my latest update, I was asked why I was sowing carrots in March, when the timeline says April.

It’s because I give the safest dates, which over the years have always worked. I do not give the “absolute earliest” because that is more risky.

Here I am gardening in a mild area, am a market gardener who takes some risks in order to have early crops, and have my garden well set up to reduce slugs, which are a main reason for not sowing carrots too early. Plus I always cover early sowings with fleece, which not everyone does.

So you may be sowing a week or two later than me, in just a few cases.

And then there is the weather… this year is mild, so earlier sowing has been and is possible for frost-hardy veg, but early May could still be frosty, so no rush to sow French beans etc, unless you like a gamble.

Timelines for other areas

A gardener in Denmark, Marina Gellert, asked how much to alter my sowing dates for higher latitudes and cooler climates.

One big factor is first and last frost date. Under cover, sow tomatoes 4-6 weeks before that, courgettes 2-3 weeks before, runner & French beans no more than one week before.

But even this is only a rough guide, for example how hard is the last frost? Marina’s comment is interesting:

In normal years we have first frost from mid October and we usually don´t have any frost from end of May in this part of Denmark (east coast Sealand).  But nights can get very cold,- a couple of years ago I had to save my tomatoes with lots of candles in the greenhouse  during a -7 degree night end of May…..

Here in Somerset UK our normal last frost is mid May, but there was a -2C/28F frost in early June 1992 which caused a lot of damage.

Every year is different.