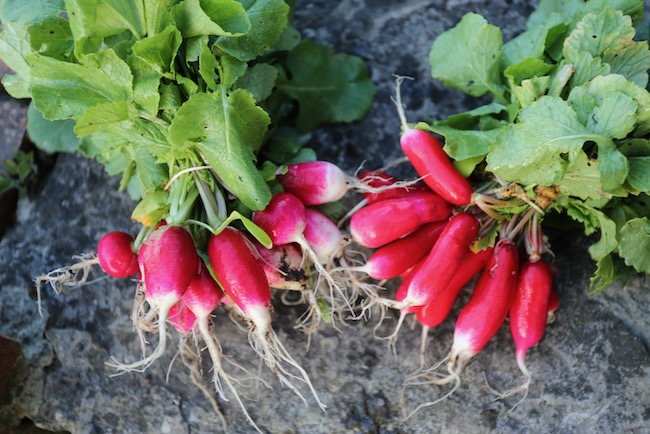 For those starting now, I wish you well. It’s never too late to make a bed or two, and new plantings continue until autumn, so take heart. My latest video has many tips for transplanting, after a quick rake and level. No dig saves a lot of time, once you are set up – see advice here on how to start, please read carefully.

Good to sow now are leeks, chard and almost any cold-hardy vegetable outside.

Best not to sow brassicas outside, because of damage from flea beetles.

With warmth you can sow basil, courgette, squash, sweetcorn and cucumber.

The world wants to know more, finally. I am happy to have enough experience to know what works, and advise accordingly. Also about how much food you can expect to grow at home – it won’t feed you through winter from a small garden, as James Wong commented.

However he claims that parsnips are difficult, and I wonder if he has tried them no dig. I receive so much feedback about successful no dig parsnips, see photo from Kevin Lane’s allotment below, clay soil. No dig increases success rates generally.

It’s lovely to reach so many of you on You Tube, and thanks for the feedback. See below for my answers to common questions – theses may become a video soon. Keep the comments coming.

The photos below are to show a simple method, with seeds flat and with just a little compost on top. For American readers, what we call compost is your potting soil. Our soil is your dirt!

Failure can come from sowing too deep. Seeds like celery and celeriac need light to germinate, and lettuce barely wants covering. Then keep compost moist but not saturated: for windowsills, a mist sprayer can help at germination stage.

In a different class

Warmth loving vegetables include tomatoes, basil, courgette, squash, sweetcorn, and especially cucumber plus melon. You can sow these now but not outside, use a windowsill or greenhouse.

Also in this category are French and runner beans. They need constant warmth to grow healthily and I don’t sow them until 10th May, even in the greenhouse.

I have found an interesting variation from spinach seed we saved last July. It’s of Medania, which is not a tightly bred variety, more a “type”, as you can see in photo 1.

See below for my measurement of Brix in spinach leaves. They were from the bought seed, and leaves going a little yellow, at which point the sweetness is strongest. When we are picking them, often before breakfast, it’s feast time!

The result of 6 was probably lower than true reading, because I had had to add a little water. 6 would be the level of a decent medium tomato, while cherry tomatoes are 8 to 10.

Lettuce is much easier than spinach. Quicker to pick as well, and we are taking huge picks from home saved Grenoble Red, sown last September.

I am leaving two lettuce unpicked in the polytunnel, so they make a heart and then a flower stem and seed. One plant would suffice. You can save lettuce seed outside if summers are not too wet.

Part of saving seed is selecting good plants to save from. It’s why I like Bingenheim Saatgut from Germany – their farmers clearly do great work. They are organic farmers too, even biodynamic.

The aspect of variety maintenance is strongly illustrated by the superiority of Bingenheim radish. Compared, oddly enough, with an “organic F1” from Johnsons Seeds, so so disappointing – high proportion of leaf to root (many rejects), very variable shape with tough pointy ends, hairy roots difficult to clean. Many seeds let down our best efforts at growing.

Bingenheim Rudi is excellent too, I am eating some while writing this – it stays crisp without going soft as it matures. Slugs appreciate them too, but not too much.

Multi sowing has really caught on, see details here. It’s great for a lot of vegetables, but not all.

I get asked about multi-sowing say shallot bulbs – not much point as they make many bulbs, from one. And say swedes – not really as a large swede is easier to cook with. While broad beans grow many stems from one seed. And other plants are easier to manage for repeat harvests from one plant – parsley, wild rocket, lettuce.

Fleece is very light, called row cover in the US.

I am always amazed how it can protect frail seedlings, yet also be pushed up by their growth. The photos say it so eloquently.

In high winds such as this morning, these covers stay in place when on the ground, rather than supported by hoops. The only time a hoop helps is to keep the cover above leaves in a frost.

Charlotte always impresses me at this time, still great to eat a full eight months since harvest. See how they look when I emptied a sack to rub off the chits.

I selected some medium size ones with nice chits, and we planted them in the beds made last December, see video. Under their compost is decomposing wool and jute, with some couch grass growing though it. We keep pulling the new shoots.

My experience of selling has a lot of rueful reflection on the low price per effort expended. This hit hard last week with beautiful broccoli selling wholesale for £3.20/kg, actually an ok price compared to elsewhere. However this meant that the lovely head you see below fetched me £2.30 from a lot of growing time and space. Seeds sown June, transplanted July, and a lot of pest protection along the way.

Grow and eat your own gives full value, and freshness.

Growth is great so I made a video using the phone, but forgot about filming in landscape. And are getting a microphone. My aim was to show how it looks now, from sowings in February mostly, transplanted March, and some overwintered vegetables.

We made a video about the trial beds too but there was a lot of wind roar, so that one is not going on You Tube!

Apples and pears are about to blossom, and blossoming respectively, all pruned.

For plums, gages and other stone fruit, best wait a month before pruning, This allow for the sap to flow and heal pruning cuts before silver leaf fungus can enter.

By frost dates and winter mildness we are zone 8 but are more like 5-6 in summer!

Rosemary asks, I have an allotment with the beds lower than the grass paths. If I lay out cardboard and the compost etc do I have to leave a cardboard path all the way around the edge to stop encroaching couch grass? This will make the plot so small?

Charles says, Sounds like a small plot already, thanks to wide grass paths.

Beds sunken from non-application of organic matter over decades I imagine.

Yes you need to card the paths, thoroughly even two layers, year one is not too pretty.

Be thorough and run card well over the edges + keep pulling any new blades of couch.

Add enough compost/old manure etc for beds to be a little higher than paths.

Aim for narrower paths once couch dies by autumn.

My sowing timeline, for Finland

After a question from Edward:

Hay and straw – I love this story:

Alden asks, I live in Nova Scotia, Canada in a Zone 6A area. I want to garden with hay. When I called around to find some though I got confusing information. I explained what I wanted the hay for, one farmer said “Hay is full of seeds and isn’t good to grow with. You should use straw.” I thought ok great now I know better. I talked to someone else I consider  knowledgeable and he said “On no don’t use straw either, it is too high in nitrogen.”

Charles replies, I understand your confusion, don’t believe all you hear!

Straw is not full of nitrogen, rather the opposite – in compost heaps it counts as brown rather than green. Hay contains more nitrogen, and it does not harm plant roots. Hay does usually contain many weed seeds, which may or may not be a problem.

What could be more important for your high latitude, with weak sunshine except high summer, is that both of them are light in colour and keep soil cooler. Also moist, so slugs may increase.

Which is why I suggest compost for temperate climates.

Stephen asks, I am planning to grow some veggies such as sweet potato/ spring onions/carrots/salad leafs, for the first time. I will have to grow them in a box/planter which are approx 6ft long and 2 feet deep. My question is, is 2ft deep enough?

Charles answers, Yes 2ft is good and I suggest mostly compost as filler, not too much soil. It could even be all compost – pack it in as well by walking on it. Lumpier compost such as manure towards the bottom, finer materials on top.

If any soil, just as bottom layer..

Watch out for sweet potatoes taking over, they use a lot of space but could trail over the sides.

No dig, weeds growing after cardboard in the first months

Paul asks,  Inspiring ideas.  But only for the first year of cardboard and no dig.  Weeds will certainly be back next season – so what then?   Perhaps you have already dealt with this in another video that I have just missed.  But how about one called sustainable no dig? Weeds also come on the wind and in bird droppings.

Charles says, Year one is about mulching the persistent perennials, and thick masses of annual weeds.

By winter and in subsequent years  you still need to weed, but it’s quick and easy because the few that grow are easy to pull from the soft surface compost. Or are easy and quick to hoe off when very small, such as weed seedlings from compost.

I don’t specifically cover this in videos because subsequent weeds are so fast and easy to deal with, that it’s not a full subject.

Detief wrote, I am converting elevated garden containers into no dig, from 500 to 1000L capacity. Do you do soil testing or monitoring for mineral deficiency/overloads in plants or soil? How do you guard against this?

Charles says, I do not soil test, so cannot advise on that. My plants tell me things are good,

Using say 50% compost as top layer of filling should ensure a balance of nutrients because it’s about biology too, nutrients being available to roots, not the same as test tube measurement.

To Neil, I reckon pond sludge is a brilliant alternative, except for needing more weeding!

You could try card then some sludge on top.

Melanie wrote, I have a ménage covered in wood chip on top of felt. Do I need to dig up the felt underneath the wood chips, or could I just start a vegetable garden straight on top of the wood chips with felt still underneath?

Charles says, The felt needs to come up, so that soil life is free to move, and then also your plants can root more deeply, for food and moisture.

Whether the chips stay under the compost depends on their age and composition – only if quite like compost, dark and soft, say two years old.

If not make a big pile to decompose, and use some for paths between beds of compost.

No need for cardboard at least.

And the compost can be old horse manure etc

48 thoughts on “April update of seasonal no dig tips and for new gardeners, seed quality and saving”